A father who took a chisel to a toy skill tester to free his daughter's stuck arm has become the victim of vile online trolling. Martin Kristoffers


A father who took a chisel to a toy skill tester to free his daughter’s stuck arm has become the victim of vile online trolling.

Martin Kristofferson, of Wynnum, in Brisbane, said he was shocked by the public’s reaction to the June 25 incident which left Hannah, eight, stuck for about 50 minutes after reaching into a machine to retrieve a prize.

Mr Kristofferson stepped in after being called by his 16-year-old son, Miles, who was with his daughter at the time.

The pair, who went shopping with their mother, Alana, were left without any assistance from Wynnum Plaza’s centre management or authorities, he said. 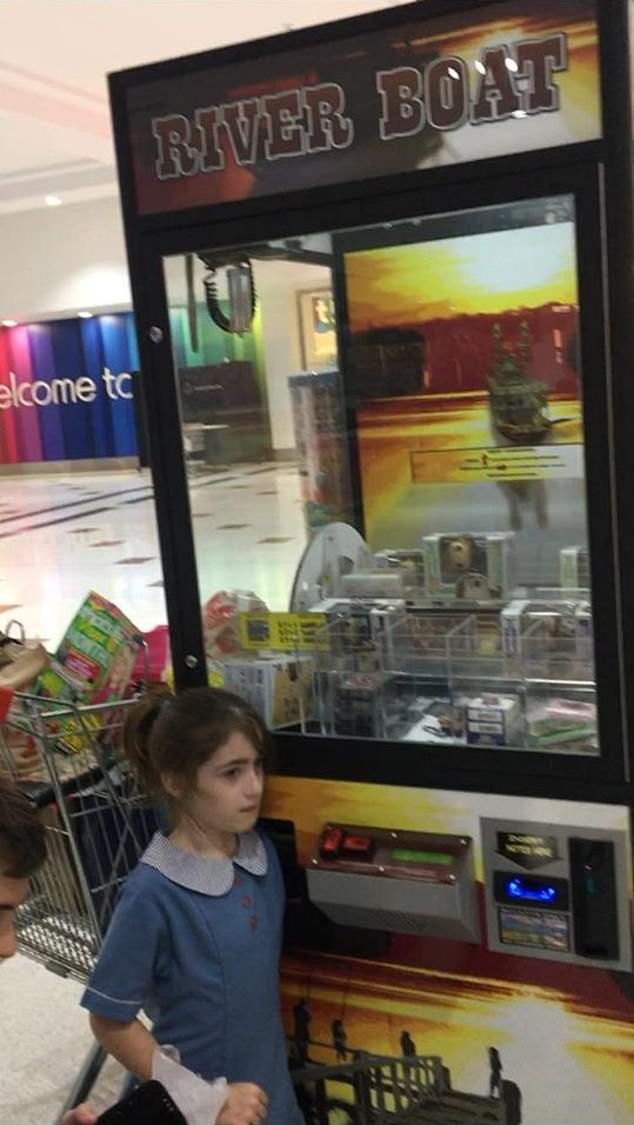 Hannah (pictured), eight, was stuck in the toy vending machine for about 50 minutes before she was freed by her dad, Martin Kristofferson. She was stuck after reaching into a machine to retrieve a prize

Mr Kristofferson said he rushed to the centre, grabbing a chisel on his way, and got there 15 minutes later.

He used the chisel to loosen one of the latches on the contraption to make his daughters arm more comfortable.

‘I expected a bit of backlash on social media because the internet is a toxic place but not the personal messages and comments calling my daughter a ‘little b*tch’ or that she have a slap for stealing,’ the 43-year-old said.

‘My daughter is fine – she isn’t on social media. It just makes you realise online bullying does happen and it happens at any age.

‘Parents really need to keep an eye on their kids online just to make sure they’re not being bullied. It has affected me but I can cope with it. I have a thick skin. Others may be different.’

Mr Kristofferson, who was born in Denmark and has been living in Australia for more than 20 years, said he was yet to hear from centre management about the incident, even though the toy vending machine had been fixed. 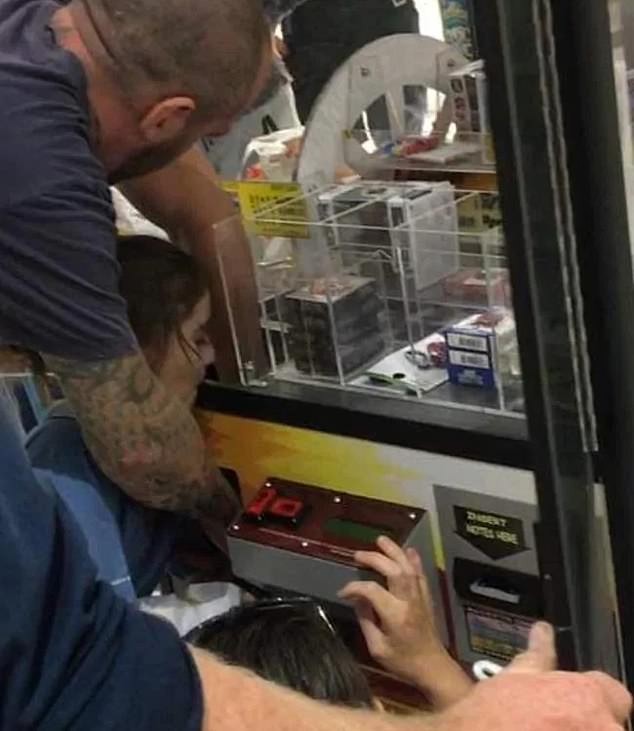 Mr Kristofferson (pictured) trying to get his daughter’s stuck arm (pictured) out of a toy vending machine on June 25. He rushed to the centre, grabbing a chisel on his way, after getting a call from his son, Miles, and got there 15 minutes later

‘I’ve not heard a peep,’ he said, adding his daughter’s incident was not the first time he saw somebody getting stuck in a vending machine at the plaza.

‘I’ve personally seen it happen before – I was at the Wynnum Plaza last year and saw another little girl become stuck in the machine. The only difference is there were firies who had bolt cutters getting her out.

‘I have a friend who saw this almost happen again yesterday, so my biggest message to the centre is to update your equipment, equipment, get some keys, contacts and work out what’s going on.’ 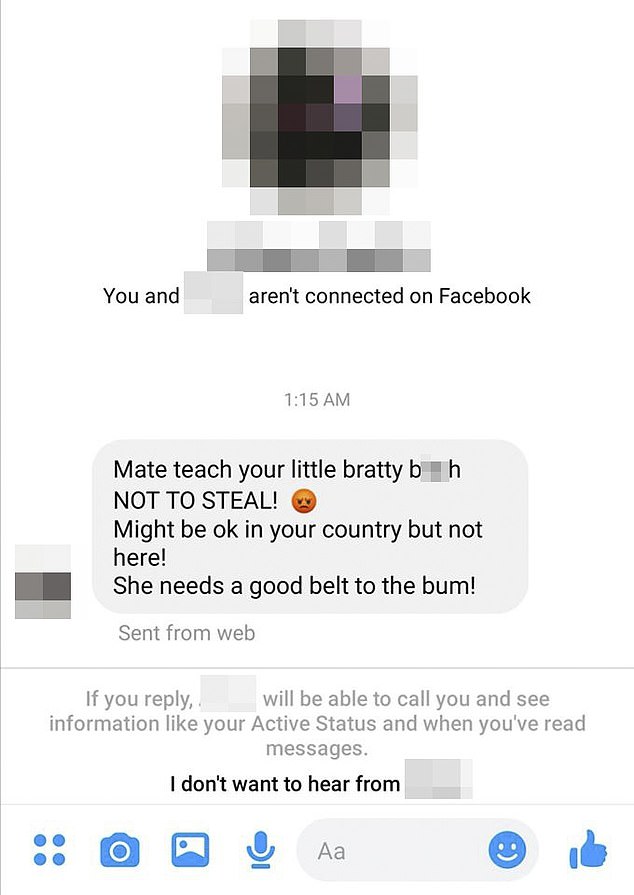 One of the messages Martin Kristofferson received on his social media account. While he has a thick skin and can ‘push through’, he said he has been affected and urged parents to keep an eye on their kids online

Mr Kristofferson said nobody had a key for the machine on the day, which was essential for future incidents. Nobody had called the fire brigade by the time he got there either, he said.

‘No one there had a key which was surprising and we tried calling the number of the machine but it just rang out,’ Mr Kristofferson said.

‘Eventually the fire brigade arrived and got her arm out.’ 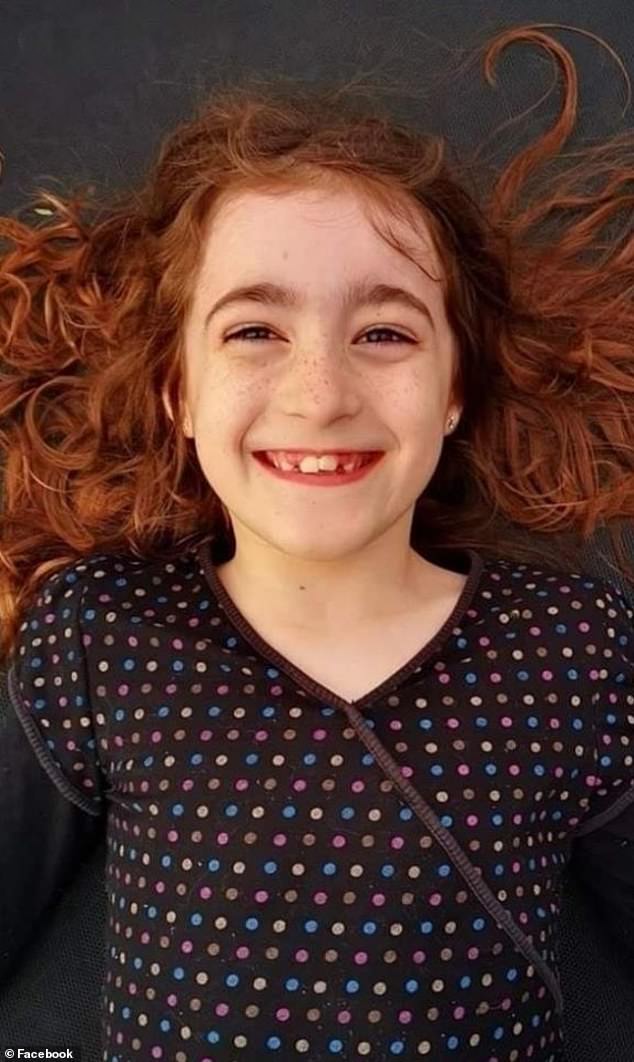 Wynuum Plaza management told the Wynnum Herald the problem ‘should be a priority’.

‘Wynnum Plaza is aware of an incident which occurred on Thursday 25 June 2020 whereby a child was attempting to retrieve a prize from a skilltester machine and has subsequently trapped her arm in the prize chute,’ general manager Michael Belfield said.

‘Once notified, Security and Centre Management staff immediately responded and requested the presence of emergency services with QFES and QAS attending the incident.’ 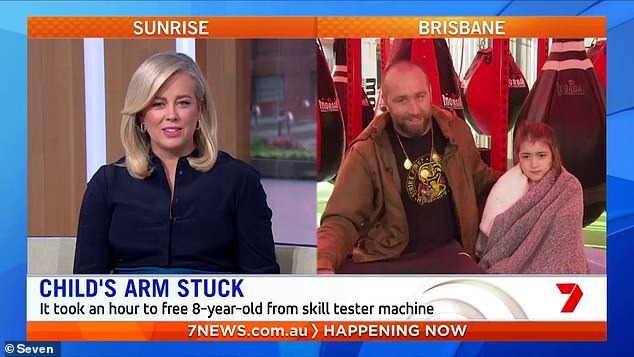 Mr Kristofferson and his daughter Hannah (pictured) speaking to Samantha Armytage about their experience at Wynnum Plaza. Picture: Sunrise/7 News

A quarter of Britons risk their lives by not doing this

Monty Don: Gardeners’ World presenter stuns fans with incredible before and after shots 0