A smirking killer posed in a jacuzzi with a glass of champagne just hours after being released early from a jail term for ramming his ex-girlfriend off the road to her death in a high-speed chase.

Michael Wheeler has sickened the family of his victim, 22-year-old Sophie Taylor, by posting the celebration photo on social media.

Ms Taylor’s grieving mum Jackie said seeing the photo feels like her heart has been ‘ripped out and stamped on’. 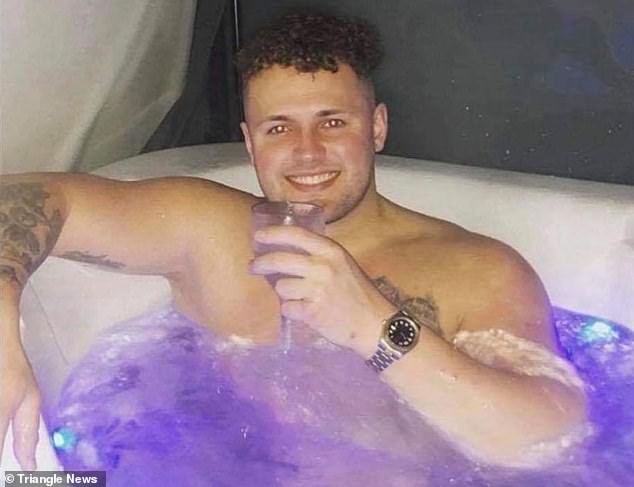 Michael Wheeler, 23, was pictured posing in a jacuzzi with a glass of champagne just hours after being released early from his jail term for causing death by dangerous driving

She is now campaigning for tougher sentences and a petition has already gained more than 9,000 signatures.

Wheeler was released from jail on June 18 after serving less than half of his sentence for causing death by dangerous driving.

The heartless thug and his girlfriend had chased Taylor through the streets of Cardiff before ramming her off the road.

Taylor suffered catastrophic injuries while her passenger lost a leg in the 2016 horror crash.

Wheeler, 23, and his girlfriend Melissa Pesticcio, 24, pleaded guilty to causing death by dangerous driving at Cardiff Crown Court and were given a total of 14 years.

But after serving less than half of his seven and half year sentence Wheeler was released last week – despite having an intimate relationship with his personal prison officer who later resigned.

Mother-of-four Jackie, 55, said she was stunned after seeing the photo of a grinning Wheeler with a glass of champagne in his hand.

She said: ‘I received a phone call at 3pm from my probation officer and by 6.45pm he was happily posting pictures of himself on Instagram.

‘It is an outrage. The pictures are of him drinking champagne in a hot tub so he’s obviously celebrating.

‘My kids are all on social media and are in bits after seeing the photo. I have reported him to the probation service and they have said this is totally unacceptable. 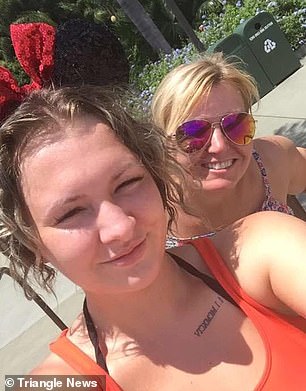 ‘How can this monster be released? He is already living the life while all I have left of my precious Sophie are my photographs, memories and her grave.

‘I didn’t even have time to let Sophie’s family and friends know he was out. They started messaging me the picture wondering if he had been released.’

He and Pesticcio had chased Sophie in their cars for three miles after she asked him to return £5,800 she’d spent on a motorbike a day before he got back with his ex Mellisa.

Sophie was pulled from the wreckage after the car was slammed into the wall, but hours later she had her life support machine switched off while her friend Joshua Deguara, 21, who was in the passenger seat, lost a leg.

Devastated Jackie had been campaigning for the pair to remain in jail after it was confirmed they would only serve half their sentences.

Under Ministry of Justice sentencing guidelines almost all prisoners only serve half their sentence.

Mrs Taylor said Wheeler can continue with her life while all she is left with are memories of her daughter who wanted to train as a midwife.

She said: ‘Sophie was a pretty girl, who was obsessed with Disney. We went to Florida every year and she was a real girly girl.

‘She wanted to start a midwifery course before her life was ripped away from her. She deserved so much more. 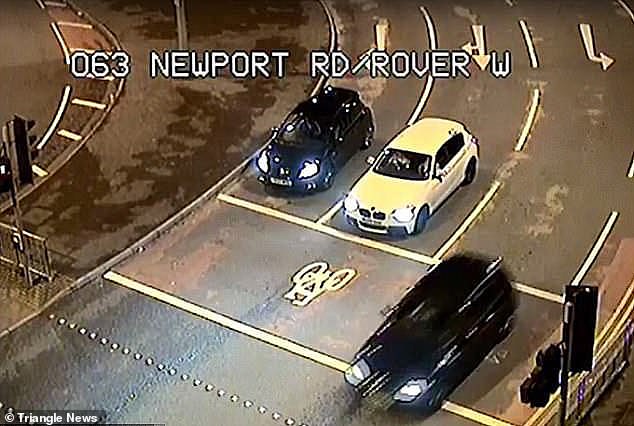 Wheeler and Pesticcio had chased Sophie in their cars through the streets of Cardiff for three miles after she asked him to return £5,800 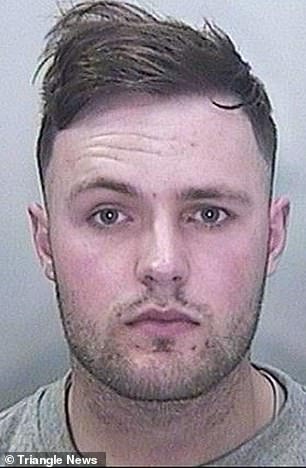 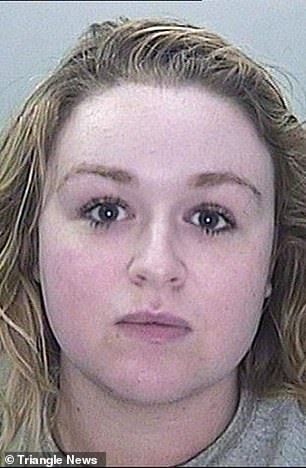 Wheeler, left, 23, and his girlfriend Melissa Pesticcio, right, 24, pleaded guilty to causing death by dangerous driving at Cardiff Crown Court and were given a total of 14 years

‘Why impose a prison sentence if they are not going to serve anywhere near it? This campaign is for tougher sentences and I will campaign for this until the day I die.

‘Why are they being let out early? They have ripped my heart out and stamped all over it.’

Wheeler was released early even though he was found to be having an inappropriate relationship with a prison officer during his time at HMP Parc Prison.

Savannah Dean, of Weig Road, Swansea, showered Wheeler with love letters and photos before she resigned last year and admitted misconduct in public office. She was sentenced to six months in prison suspended for a year.

Passing sentence over the ‘highly sexualised’ relationship, Judge Michael Fitton said: ‘Misconduct in public office is a very serious matter and such behaviour undermines public confidence in the prison system.

‘It was unsettling for other prisoners, who see someone receiving different treatment, and impacts on the work of other prison officers.’

Jackie took an instant dislike to Wheeler when she met him in her kitchen just weeks before her daughter’s death.

The family had just returned from a holiday in Florida and Sophie was not long out of a four-year relationship with her first love. 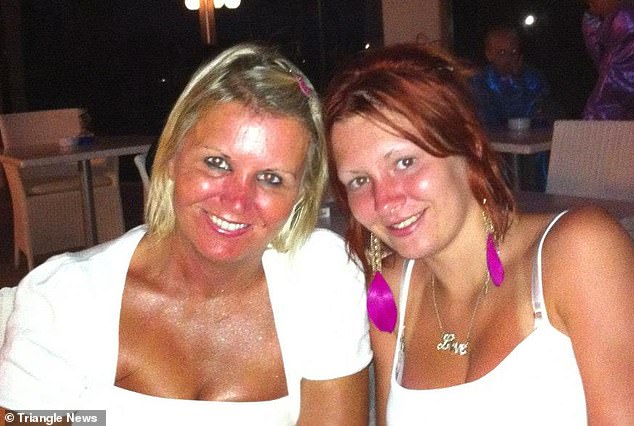 Sophie and her mother Jackie. Unbeknown to Jackie, Sophie took out a £6,000 loan to buy Wheeler a motorbike one Saturday in July

Admin worker Jackie said: ‘He was odd and there was something creepy about him. He didn’t look at me and he seemed really edgy and couldn’t wait to get away.

‘I said hello and he just put his head down, grunted, and scurried off. Later, I asked Sophie about him and she told me it was nothing serious and they were just getting to know each other.

‘I told her I hope she didn’t mind me saying but I didn’t like him particularly after he ignored me. She said she’d speak to him about it before coming back but it never happened.’

Jackie claims Amazon parcels soon started arriving to the house which she later discovered included a PlayStation and expensive clothes which her daughter was buying for Wheeler.

Unbeknown to Jackie, Sophie took out a £6,000 loan to buy Wheeler a motorbike one Saturday in July.

But the next day he crashed it and when Sophie went to visit him in hospital she was frogmarched out by Wheeler’s ex girlfriend, Melissa Presiccio, who said they were now back together. 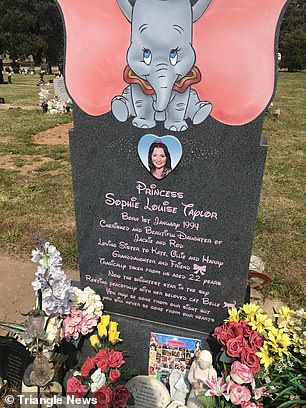 Sophie’s grave, pictured. Jackie said Wheeler and Pesticcio have never shown any remorse or offered any apology for Sophie’s death

Heartbroken Sophie followed up with Wheeler about paying her back for the bike but was ignored. On the day of her death, in August 2016, she confided in her uncle about the loan. He convinced her to tell the police before going home to tell her mother.

But she picked up a friend first and went to Wheeler’s house to check if he was there because he was ignoring her messages and calls. Wheeler was parked out front and proceeded to chase Sophie with the help of Presticcio before she was eventually killed in Adamstown, Cardiff at 12.35am on August 22.

‘I was asleep in bed and had work the next morning when I was awoken by a knock on the door,’ Jackie said. ‘I thought I was dreaming but it went on and on.

‘It was a traffic officer telling me that Sophie had been in an accident. He said it was very serious and I went with him straight away.

‘My two boys Harry and Oliver, 19 and 22, were at their dad’s and I was alone. I couldn’t even dial the numbers on my phone to call family when I was in the police car because I was shaking so much. But I was expecting to find Sophie sat up in bed and for me to say ‘Oh what’s happened now’.

‘A senior nurse told me they had looked at Sophie’s brain scans and there was nothing they could do. They wanted my permission to turn off the life support machine and to donate her organs. I said I needed to see her and I told the nurses she was cold and she needed blankets. I would have given away her organs if I’d had time to think about it but I was in a mess.’

Surrounded by family, Sophie’s life support was turned off at 8am that morning while a distraught Jackie held her hand.

Jackie said Wheeler and Pesticcio have never shown any remorse or offered any apology for Sophie’s death. 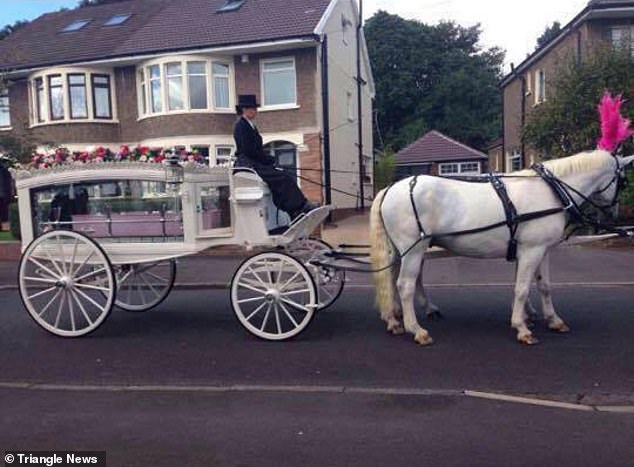 Sophie’s funeral in August 2016. She was pulled from the wreckage after the car was slammed into the wall, but hours later she had her life support machine switched off

‘If they would have shown genuine remorse it would have helped,’ she added. ‘All I have left to fight for now is justice with the petition. I still don’t know how he has been left out early. Even though there is an exclusion order in place to stop the pair visiting Cardiff City Centre I don’t know how I will react if I see them out and about.’

Remembering Sophie, Jackie said she was a homegirl who loved her family. She was also extremely proud to be the first baby born in Cardiff on New Year’s Day, 1994.

Jackie added: ‘She used to bring the newspaper clippings to job interviews and say ‘this was me’. Sophie even teased her siblings about it and said ‘well you weren’t born on the first day of the year were you’.

‘She loved her family and Sophie adored Christmas and would say let’s put the tree up and I would have to tell her it’s November.’

A Ministry of Justice spokesman said: ‘We understand the release of a prisoner can cause distress to victims, and our thoughts are with Miss Taylor’s family, as well as Mr Deguara and his family.

‘Anyone released from prison faces strict conditions while on licence, such as curfews and exclusion zones, and can be returned to custody immediately if they are breached.

‘This Government is making the most serious offenders spend longer in prison and will introduce life sentences for those who cause death by dangerous driving.’

Is Gary Lineker's playboy brother the most deluded dater on the web?
11 mins ago