These are the first pictures of a former Army soldier accused of mowing down and killing a father and his two children, 15 and 12, during a Father’s Day walk as he appeared in court today charged with causing death by dangerous driving.

Supermarket worker David Logan, 47, appeared before magistrates today with his arm in a sling, grazes to his face and walking with a crutch.

The court heard he was breathalysed at the scene of the incident which saw the death of Joshua Flynn, 37, his son Cobey-Jay, 15, and daughter Skylar, 12.

They were out walking the family’s Yorkshire terrier, Troy, on Sunday afternoon on the outskirts of Dalton-in-Furness, Cumbria, when Logan’s Peugeot 206 allegedly mounted the pavement and struck them before hitting a tree. 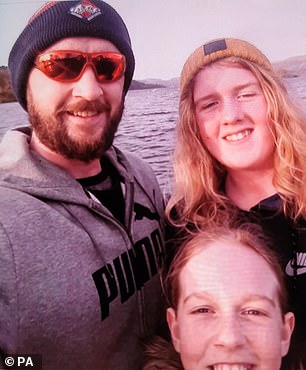 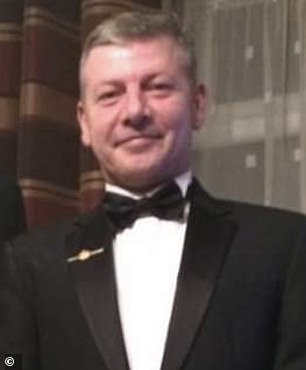 Joshua Flynn, 37, his son Cobey-Jay, 15, and daughter Skylar, 12, (all pictured left) died after David Logan’s (right) car allegedly mounted the pavement and struck them on Sunday

Joshua’s wife Emma had to be told her entire family had been wiped out in a matter of seconds at their home in neighbouring Barrow.

The results of the breathalyser test will be known in around three weeks and Logan is not charged with drink driving, though the investigation into that remains open. He has been charged with three counts of causing death by dangerous driving.

Prosecutor Peter Kelly told South Cumbria Magistrates Court: ‘This is a tragedy for the family involved.

‘It is alleged the defendant has driven in a manner where he has collided with three members of the public and the family pet as they were effectively minding their own business and using the pavement normally.

‘The Crown’s position certainly at this stage is that his driving caused their deaths. The defendant was breathalysed at the scene and investigations are ongoing but he is not charged with anything in relation to that.’

There was no application for bail from Logan’s solicitor Andrew Gallagher. 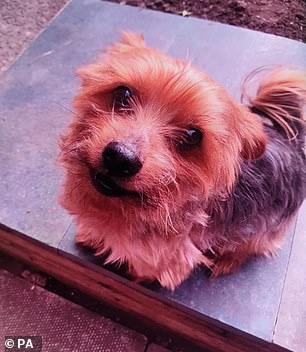 The family’s dog, Troy, described as ‘another member of the family’, also died in the crash

Mr Kelly added: ‘This has generated substantial feeling in the local community. The police do have very real and genuine concerns that if the defendant were released back into the community there is a risk of reprisal against him.’

Logan, a former soldier who lives in a flat in Dalton-in-Furness around a mile from the crash scene, struggled to stand when told to do so by chairman of the bench Christopher Harris.

Mr Harris told him: ‘You will be remanded in custody until July 24th when you will appear before Preston Crown Court for a plea and trial preparation hearing.’

A pile of floral tributes have been placed against the tree struck by the car after ploughing into the family as it allegedly mounted the pavement.

Emma, who works in a local Subway branch, did not go on the walk and had to be told by police officers that her entire family had been wiped out in the horrific crash on Abbey Road, Dalton.

Local people began fundraising to help the family and so far, at the time of writing, £40,500 has been raised.

Emma and her family paid tribute to Joshua and the children in a heartbreaking tribute. 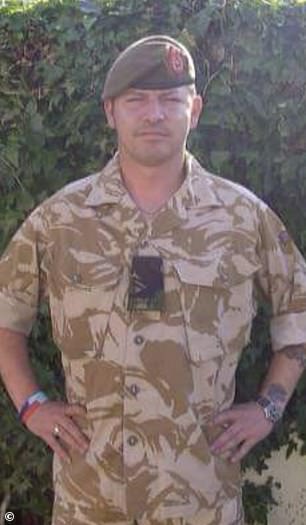 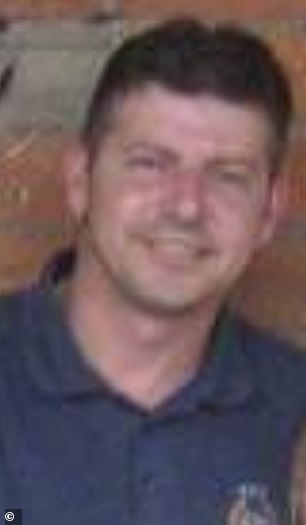 Former Army soldier Logan, pictured above, appeared before magistrates today with his arm in a sling, grazes to his face and walking with a crutch

They said: ‘From the moment we received this terrible news our whole world has been turned upside down and there are no words to describe how devastated we are feeling.

‘We are utterly heartbroken and upset by the loss of Joshua, Coby-Jay and Skylar.

‘We would like to thank everyone for their kind messages of support, the cards and the donations received.

‘Joshua was a family man and a good guy. He would do absolutely anything for anyone and was a genuine, lovely man. He was a loving husband and doting Dad.

‘Joshua was fitness mad and loved going to the gym and exercising.

‘Coby-Jay was a typical teenager, he was obsessed with computers and computer games, in particular his Nintendo. He was a lovely young man – kind, happy and upbeat. 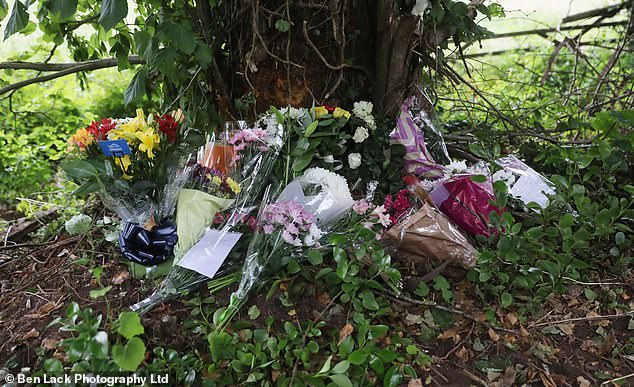 Flowers left at the scene where the family died along with their Yorkshire terrier dog, Troy, as they walked in the Cumbrian town of Dalton-in-Furness

‘Skylar, like any young girl at the moment, was TikTok mad. Like her brother, she enjoyed playing on computer games in particular Roblox – exchanging pets.

‘She was always so happy with a lovely smile on her face.’

The beloved family dog, Troy, a Yorkshire terrier also died. He was described as ‘Another member of the family, such a good and well behaved lad.’ They added: ‘His loss is also felt.’

A neighbour of Emma’s said: ‘She is in a terrible state, what has happened to her is almost unbelievable. They were a lovely family and the kids were amazing.’

A friend of the girl left flowers at the scene of the accident along with a note, written on the plastic wrapping of the bouquet.

It said: ‘You were a great friend and I will miss you. You were amazing at gym. From Anya.’

Princeton University is under investigation by the Department of Education

Scott Morrison reveals when strict travel caps will be lifted

Princeton University is under investigation by the Department of Education

Scott Morrison reveals when strict travel caps will be lifted