As Fourth of July weekend approaches, coronavirus cases are soaring in Florida, New Jerseyans are flocking to the beach against health experts’ advice and New York is no longer declared on track to ‘contain’ the virus.

On Thursday, Florida reported its highest-ever single day increase in cases at 10,109, bringing the total number of infections in the Sunshine State to 169,106.

In an effort to contain the outbreak ahead of Independence Day festivities, Florida has closed bars and some beaches, but Gov Ron De Santis has so far resisted mandating masks statewide or reentering lockdowns.

Beaches are open, however, along the Jersey Shore and Americans and flocked back to celebrate the holiday weekend. But some residents are nervous that large crowds and poor compliance could lead to another spike in cases.

Meanwhile, researchers say that New York, previously the hardest-hit state in the US, is no longer reducing its number of people infected with COVID-19, the disease caused by the virus.

However, although all four states states – Arizona, California, Florida and Texas – reported a combined 25,000 new confirmed coronavirus cases, a smaller percentage are coming back positive and deaths haven’t skyrocketed like in New York City.

Additionally, deaths are still not yet on the rise, which some health experts may say is due to younger people being infected with milder cases of the virus. 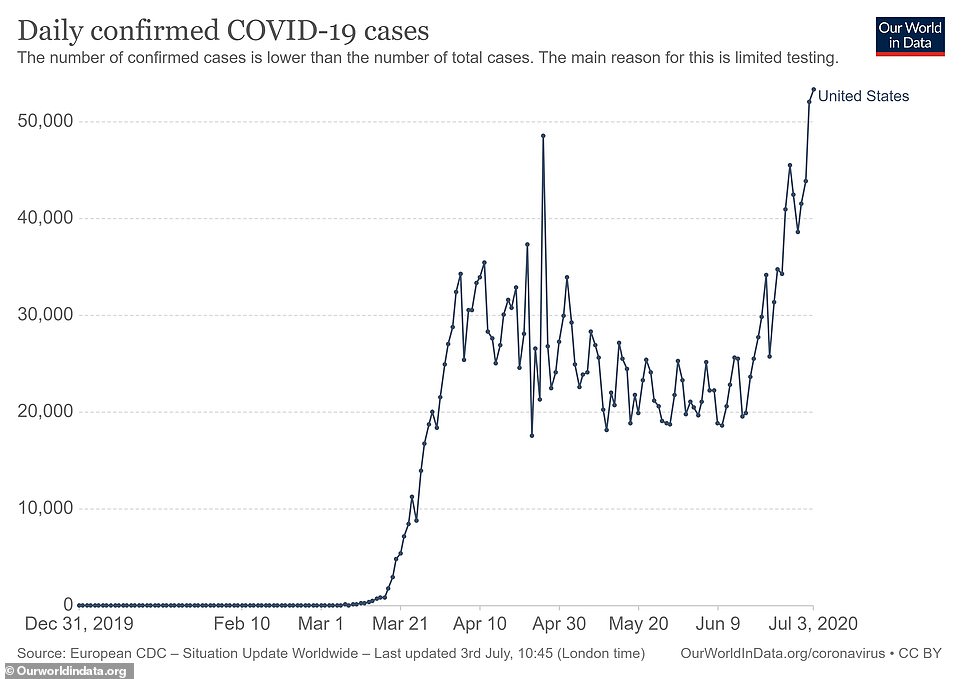 Daily cases have continued to rise across the US to about 50,000 per day, particularly in the the South and Southwest, but deaths have not followed at the same rate, despite a lag 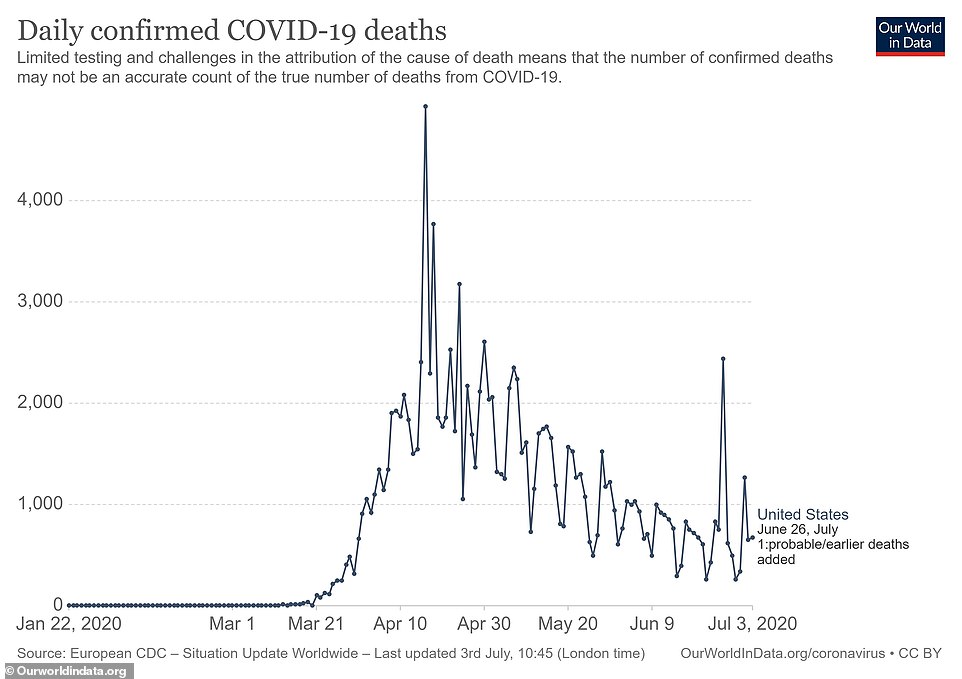 Some health experts believed this may be because younger people are getting infected in the South and more is understood about the virus than in March, during the Northeast’s peak 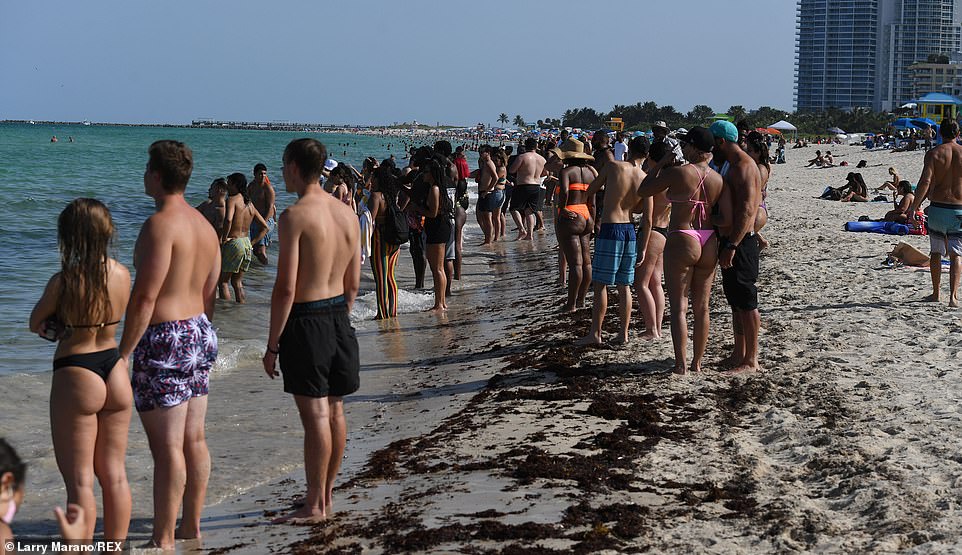 Florida reported its highest-ever single day increase in cases at 10,109, on Thursday, making many fearful of what Fourth of July celebrations will bring. Pictured: People congregate on Miami Beach in Florida, July 2 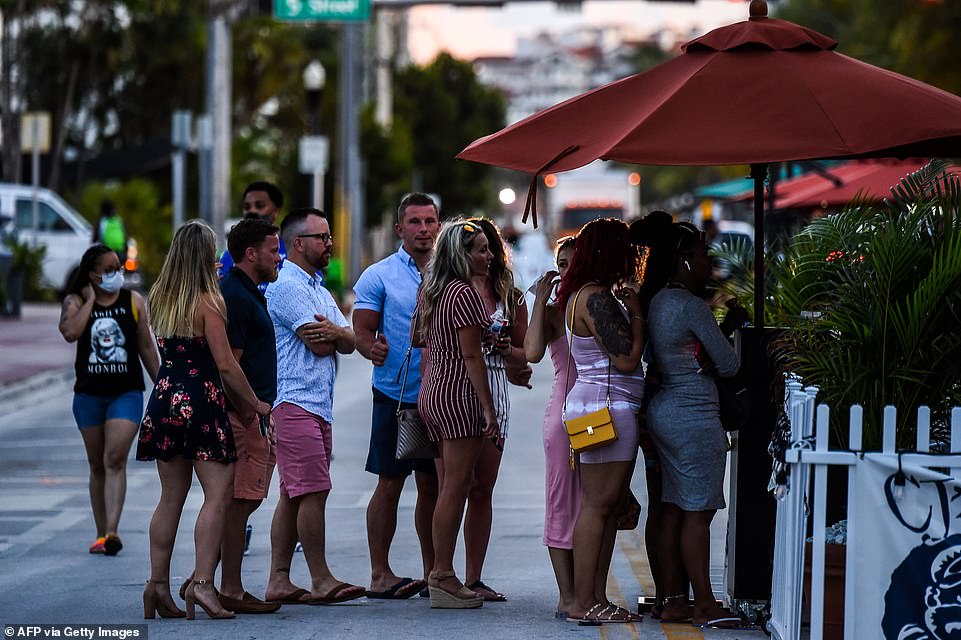 Bars and some beaches have closed, but Gov Ron DeSantis has not issued an order to wear masks statewide. Pictured: People stand in queue to enter a restaurant on Ocean Drive in Miami Beach, June 26

In June, infections in Florida rose by 168 percent or more than 95,000 new cases. The percent of tests coming back positive has skyrocketed to 15 percent from four percent at the end of May.

This means that Florida, home to 21 million people, has reported more new daily coronavirus cases than any European country had at the height of their outbreaks.

Admiral Dr Brett Giroir, assistant secretary for health for the US Department of Health and Human Services, said the rise in cases is due to new infections, not from a rise in testing.

He added that Florida, Arizona, California and Texas account for about 50 percent of new cases which are ‘very concerning to all in public health.’

‘There is no question that the more testing you get, the more you will uncover – but we do believe this is a real increase in cases,’ Giroir told the House Select Committee on Coronavirus on Thursday.

Although Gov DeSantis has not issued an order to wear masks statewide, several individual counties such as Miami-Dade have mandated it.

Miami Police Chief Jorge Colina said on Thursday police officers would issue fines to anyone not wearing a mask in public.

‘That means we’ll be closing businesses that do not comply with the orders,’ Colina told reporters.

He also halted the reopenings of venues, such as casinos and theaters that had been set for Friday.

DeSantis said state health officials can handle the uptick in cases and that Floruda doesn’t need to close shops or restaurants.

‘We’re not going back, closing things,’ he told reporters.

‘I mean, people going to business is not what’s driving it. I think when you see the younger folks, I think a lot of it is just more social interactions and so that’s natural.’

Only one other state has reported more than 10,000 new cases in a single day. New York recorded 12,847 new infections on April 10, three weeks after the state implemented a strict lockdown that closed most businesses.

Bloomberg reports that certain factors that causes the disease to explode in New York City will likely not occur in the South including an understanding of how the virus spreads, an increase in testing and a lower percentage of people testing positive.

‘The basic message that COVID-19 cases were much more severely undercounted in March and April than they are now is almost certainly correct,’ writes Justin Fox.

‘The Sun Belt outbreaks are thus of a lesser speed and scale – so far, at least – than those that hit New York and a few other metropolitan areas in spring. 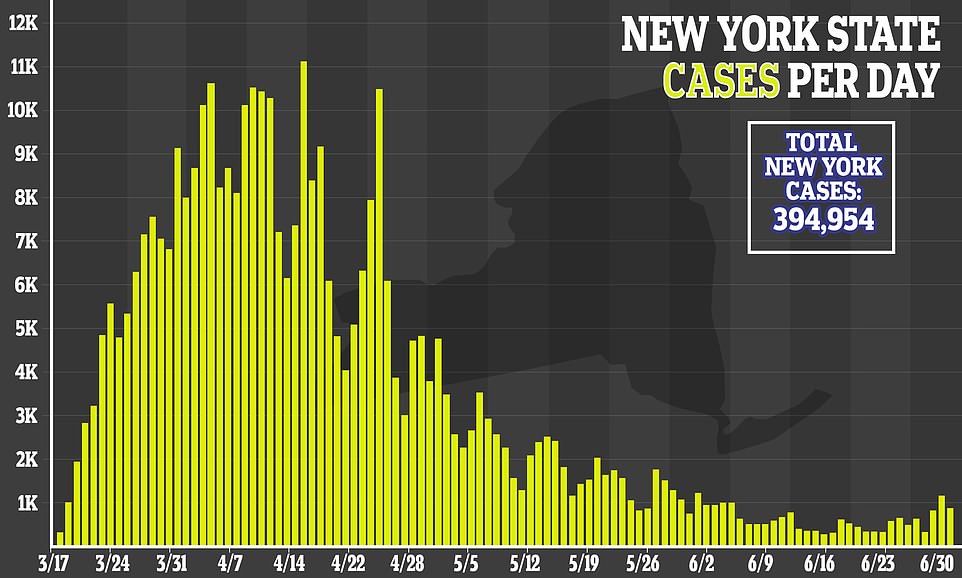 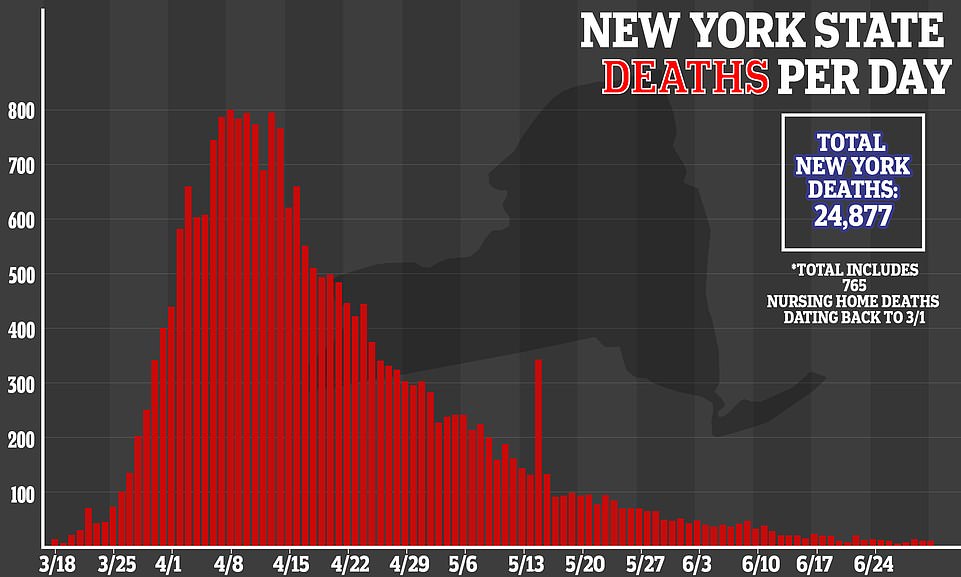 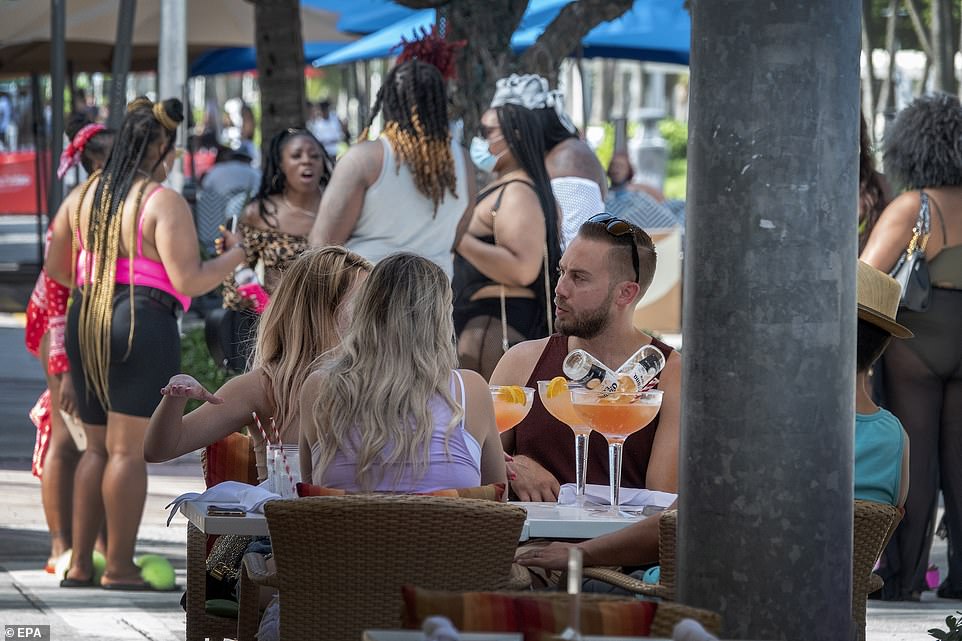 Confirmed coronavirus cases are rising in 40 of 50 states and Arizona, Florida, California and Texas account for 50 percent of all new infections. Pictured:Groups of people talk and each in Miami beach, Florida, June 26 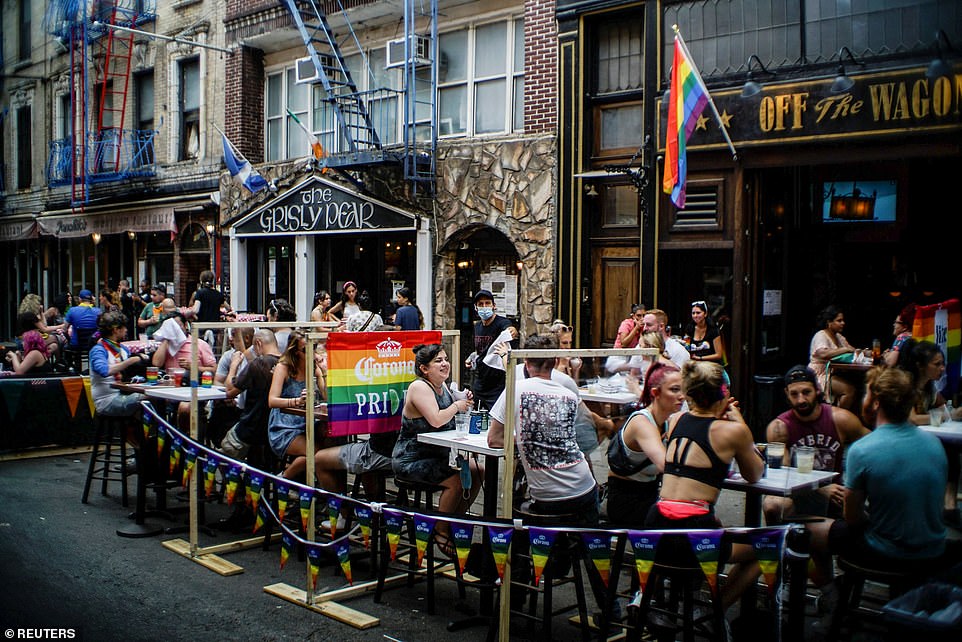 Researchers say New York and New Jersey were containing the virus, but now they are only showing ‘controlled disease growth,’ meaning new infection rates are flat and not down. Pictured: People enjoy al fresco dining at bars and restaurants after a joint LGBTQ and Black Lives Matter in New York City, June 28

Once the epicenter of the US epidemic, New York saw cases rise by about six percent in June – the lowest rate in the entire country.

However, New York and New Jersey are losing ground in their battle against the virus, according to Covid Act Now, a web-based initiative to model COVID-19 data.

Researchers say both states were containing the virus, but now they are only showing  ‘controlled disease growth.’

‘This means that the number of actively infected people is no longer shrinking, as was the case last week, but are holding steady and ‘treading water,’ neither increasing nor decreasing.’

However, both New York and New Jersey are reporting good trends for positive test rates, ICU capacities and contract tracing.

‘While this is better than many other states in the US, the public health ideal is to contain COVID-19, similar to what we’re seeing in Western Europe and East Asia, which means maintaining a negative growth rate and driving the disease as close to zero as possible,’ Kreiss-Tompkins told the station. 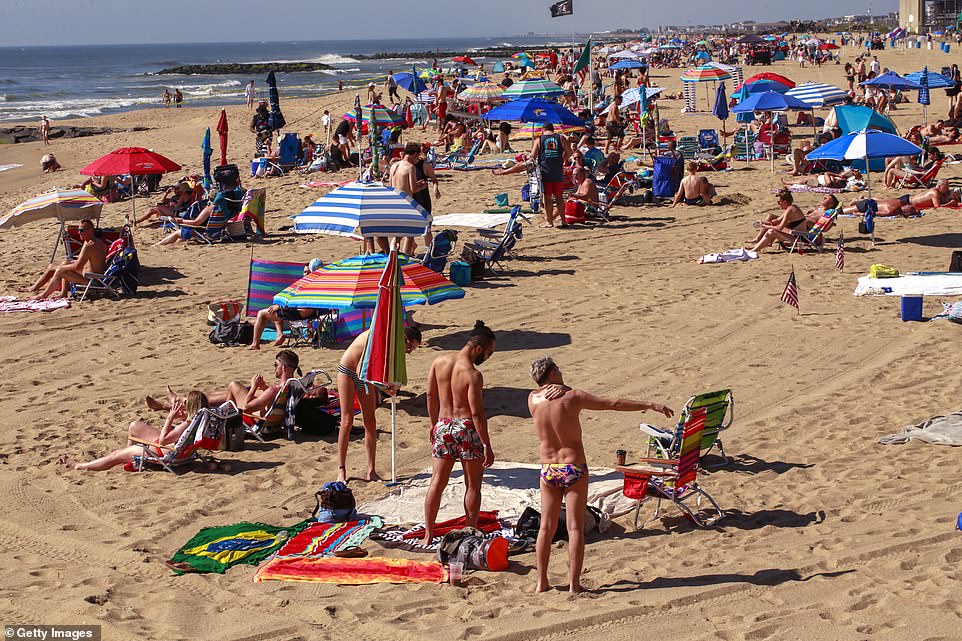 Beach town mayors in New Jersey are worried that large crowds without masks congregating to the Jersey Shore on Fourth of July will lead to a spike in cases. Pictured: People visit the beach during Memorial Day weekend in Asbury Park, NJ, May 26 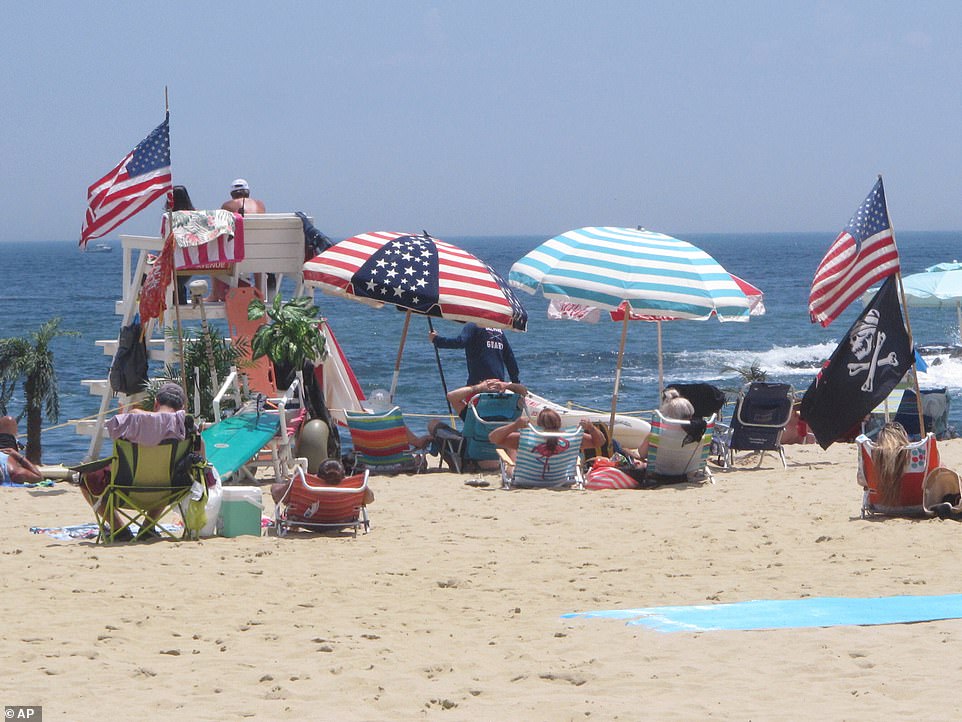 Now, as holiday goers flock back to the Jersey Shore to celebrate Fourth of July, that’s making some people nervous in The Garden State, where 172,356 people have tested positive and more than 13,000 have died.

‘I am really concerned,’ said Paul Kanitra, mayor of Point Pleasant Beach, a popular shore town that was unexpectedly overrun by thousands of tourists who swarmed the beach and boardwalk a few weeks ago at a ‘pop-up party,’ paying little heed to social distancing or masks.

‘We’re seeing spikes across the country in states that opened up weeks ago, and while we’re doing a good job in New Jersey, there are a lot of people that are way too cavalier about social distancing,’ he said. ‘There’s inherent risk in all of this.’

Large crowds are expected at the shore for the holiday weekend: New Jersey’s casinos have reopened, along with amusement rides and water parks. Beaches are open, though at reduced occupancy levels. Restaurants can offer limited outdoor dining, and stores and shopping malls have reopened.

But not everyone is following rules designed to prevent the spread of the virus, including wearing masks and keeping six feet (two meters meters) apart.

Gov Phil Murphy saw videos of the packed club and warned the state will not hesitate to reimpose harsher restrictions if people don’t behave.

‘We cannot let up on our social distancing or our responsibility just because the sun is out,’ the governor said. ‘We can’t be lulled into complacency and think it’s OK to crowd around a bar. That is how flare-ups happen.’ 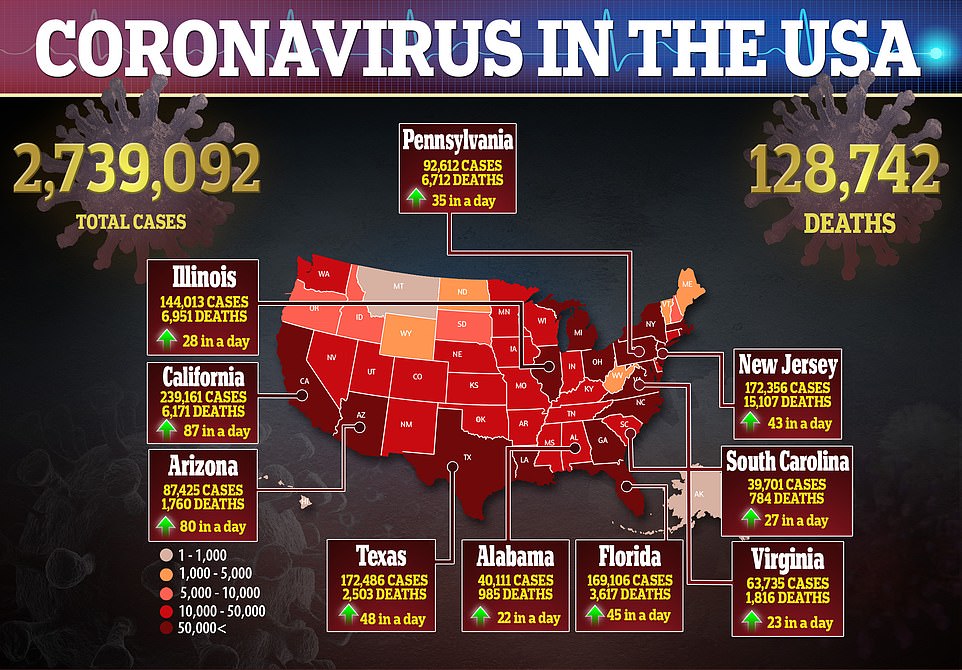 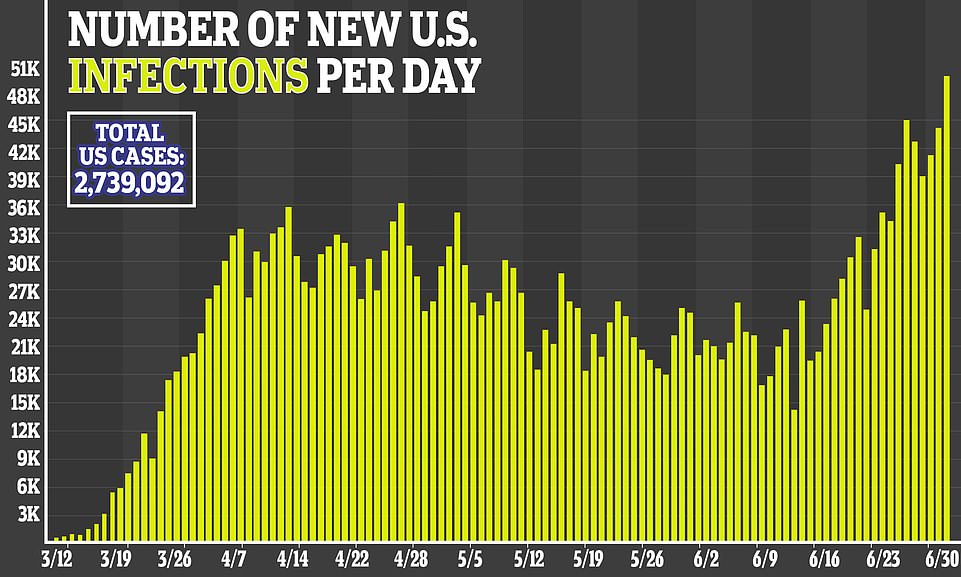 Skyler Walker, a woman from Scotch Plains in her early 20s, was on the Belmar beach last week on a sunny day with temperatures brushing 90F (32.2C).

‘I definitely think people people are starting to care less about’ the virus, she said. But the face mask she wore on the boardwalk while waiting in line to buy beach badges indicated she does not share that view. ‘They act like it’s over now.’

Michael Scott, another 20-something on the Belmar beach, said he and his friends have modified their behavior this summer, including at nightclubs.

‘I try to just hang out with my people,’ he said. ‘I’m not all about looking to meet new people. We have a close group of friends that all kind of quarantined together.’

Ocean City Mayor Jay Gillian pleaded with residents and visitors to wear masks during the long holiday, including on the boardwalk, noting, ‘Ocean City is already very crowded.’

Although New Jersey’s hospitalization rate is down drastically from a peak a few months ago, officials fear hospitalizations for the virus will rise again if people become lax about taking precautions.

‘We are especially concerned after the gatherings we saw at the Jersey Shore,’ added the state’s health commissioner, Judith Persichilli.

‘Individuals were packed together, which raises the risk of spreading the virus.’ 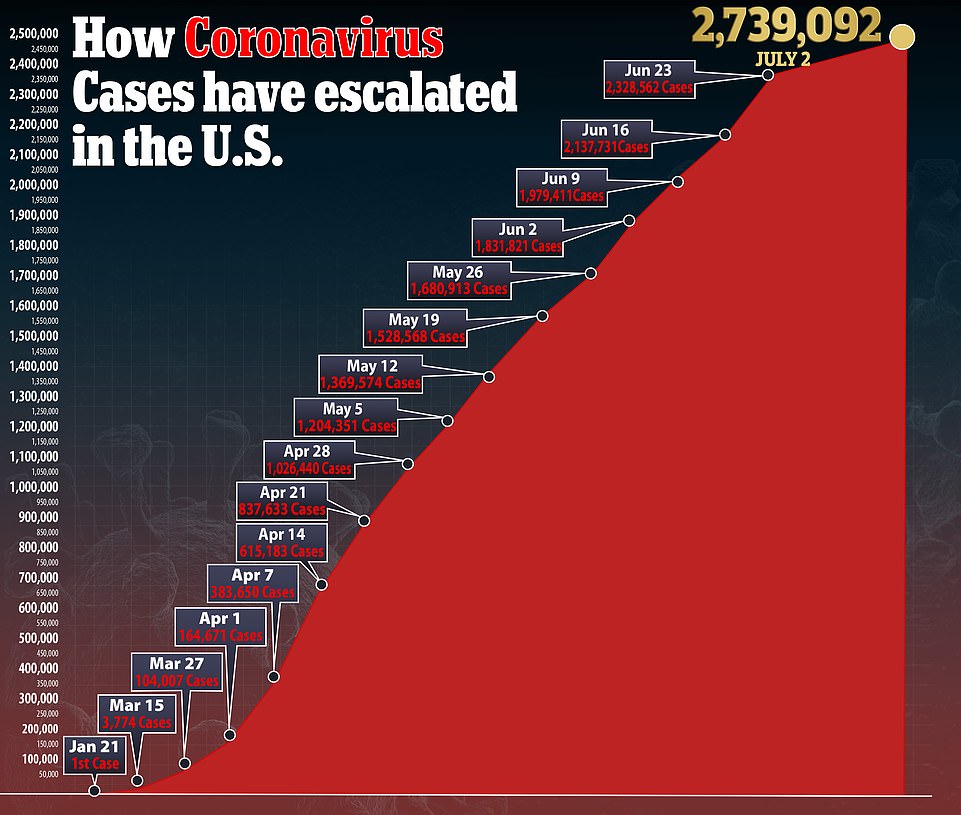 Is Big Ten football back on? Nebraska President caught on hot mic
7 mins ago