What lies beneath: Incredible pictures show a giant 2.7m bull shark being pulled from Sydney Harbour in an area popular with boat parties and kayakers

Just when you thought it was safe to go back in the water…this horrifying picture may well change your mind.

Hooked through the face this giant 2.7m long bull shark was found in Sydney Harbour close to where kayakers enjoy a paddle or boozed up partygoers leap from boats.

The shark was captured by the Department of Primary Industries, which spends millions each year keeping Sydney safe from sharks. 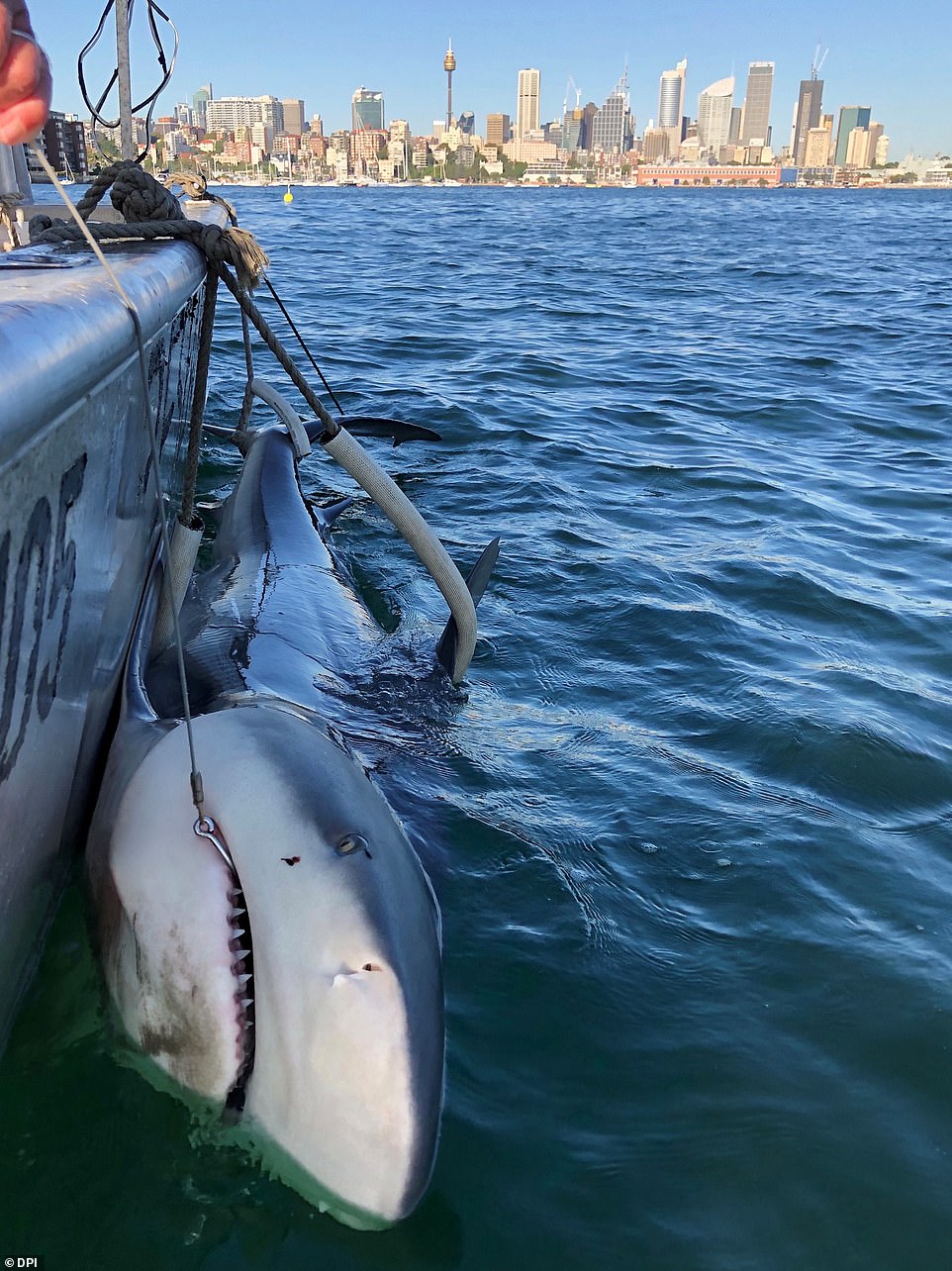 This predator was tagged under the NSW Shark Program which aims to monitor the animals when they swim in or near waters populated by people.

When they could see it was too close to where people were enjoying the water, the authorities moved to tag and release the shark.

Bull sharks are known to swim in the waters around the Sydney Opera House and Woolloomooloo, although how many are relocated a year is unknown. 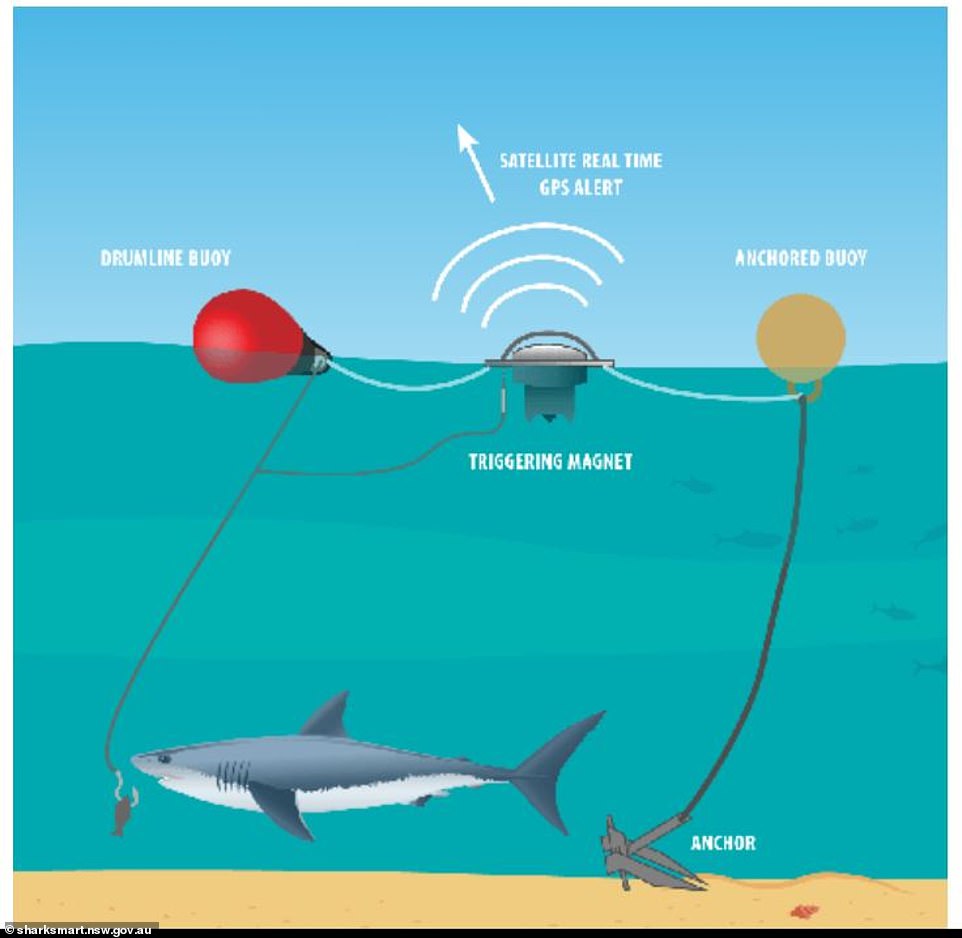 Using drones and a system known as SMART Drumlines the NSW government aims to track sharks more effectively when they enter waters populated by people. Pictured is the system that uses a baited hook and GPS to monitor sharks

What is a Bull Shark?

Bull sharks are some of the most likely types of shark to harm humans.

This is because they prefer to swim in shallow waters similar to us.

Bull sharks are known to be quite aggressive and resilient to fresh water but prefer to live in tropical areas.

They are known to eat almost anything they find from fish to dolphins and sometimes attack humans.

On Wednesday, the NSW government announced a $8million strategy that will strengthen the existing shark tagging program.

Minister for Agriculture Adam Marshall said the program would add drone surveillance of beaches and a system known as SMART Drumlines that utilise baited hooks attached to GPS systems to track sharks.

‘Our world-leading research showed SMART Drumlines and drones are the most effective detection and surveillance tools,’ he said.

‘Drone technology has advanced dramatically in recent years, with the devices now able to fly thousands of kilometres, automatically detect the size and species of a shark as well as provide surf lifesaving assistance to distressed swimmers,’ he said.

‘Under the new program we will continue to deploy 35 SMART Drumlines along the north coast, which will provide ongoing protection to beachgoers and advance what is currently the largest shark tagging program in the world.’

The technology will work with the 21 shark detecting stations and shark nets placed along beaches between Newcastle and Wollongong.

The tracking information is used by NSW Surf Lifesavers who have welcomed the new technology.

The public is also to learn more about suspected shark sightings and netted areas through the Shark Smart app. 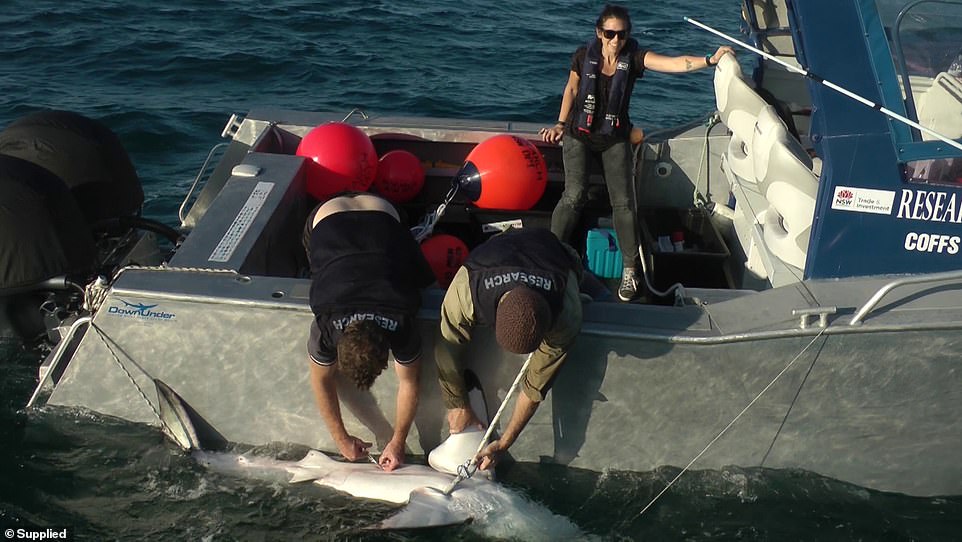 The new technology will work alongside the existing shark tagging program

Premium Bonds July 2020 winners: What are the winning numbers this month?

Sky, BT and TalkTalk customer just received a massive boost to their broadband speeds
9 mins ago

EE turns its back on Carphone Warehouse: what to do if you're a customer ready to upgrade
10 mins ago

EE turns its back on Carphone Warehouse: what to do if you're a customer ready to upgrade