Less than half of people referred to NHS Test and Trace after testing positive for coronavirus have given any details of their close contacts, data revealed today.

In its report this week, the Department of Health said the people who were unable to give contact details were ones who had only come into contact with complete strangers, such as on the bus.

The staggering number suggests that an app – which automatically links people’s phones so it can alert people who don’t know one another – may be necessary for contact tracing to work perfectly.

From the infected people who have been successfully contacted themselves, two thirds of them were able to give details of one or more close contacts.

Between June 17 and the system’s launch at the start of the month, 15,225 confirmed coronavirus patients have been successfully reached by contact tracers.

But more than one in three – 5,167 people – were ‘not able’ to give details of a single person they may have come into close contact with.

A further 5,062 people who tested positive could not be reached at all by contact tracers – who phone, text and email someone 10 times a day to get hold of them.

Today’s update revealed that a total of 134,893 people – people who have tested positive, and their contacts – have been in touch with NHS Test and Trace in three weeks.

One scientist said the statistics today were ‘worrying’ and could only be solved with better co-operation from the public – not by the Government. 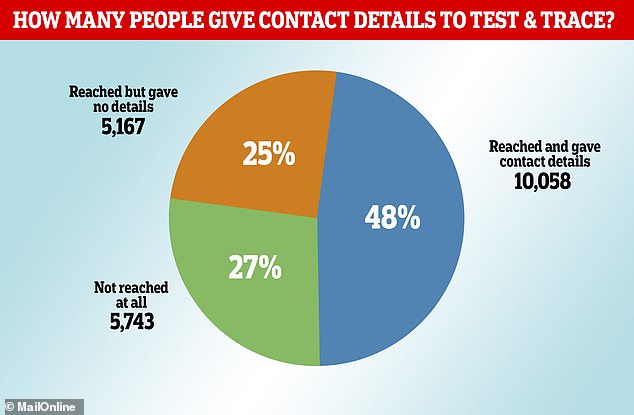 The Department of Health admitted in its report today that many people who were successfully contacted by Test and Trace, but didn’t give any details of contacts, simply didn’t know how to reach people they had been close to.

It said: ‘The number who were not able to give any recent close contacts refers to people who were successfully reached by NHS test and trace, but could not provide details of close recent contacts to pass on for further contact tracing (for example, recent close contact with strangers on the bus).’

Until last week the NHS had been working on a mobile app which would automatically record and link the smartphones of people who came close to one another.

This would have allowed technology to keep records of people’s contacts, and could overcome the obstacle of people being unable to give details of strangers.

But the app was abandoned after ‘technical challenges’ during a trial on the Isle of Wight which revealed it could only spot four per cent of iPhones nearby. 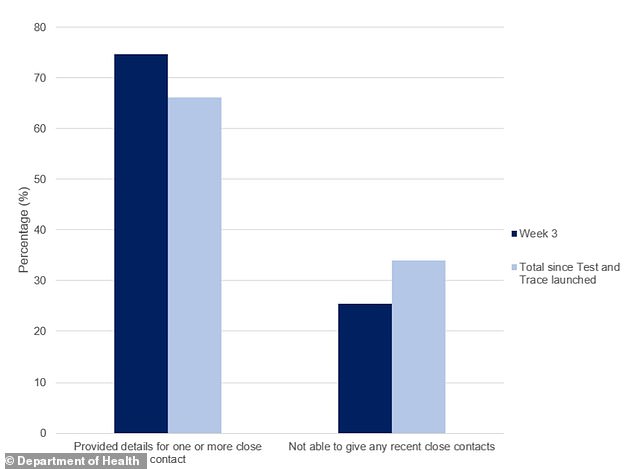 Since test and trace launched, only two thirds of people who picked up the phone have actually given any contact details for people they came close to. When the number of infected people who couldn’t even be contacted is factored in, the proportion of people with Covid-19 giving useful information falls below 50 per cent 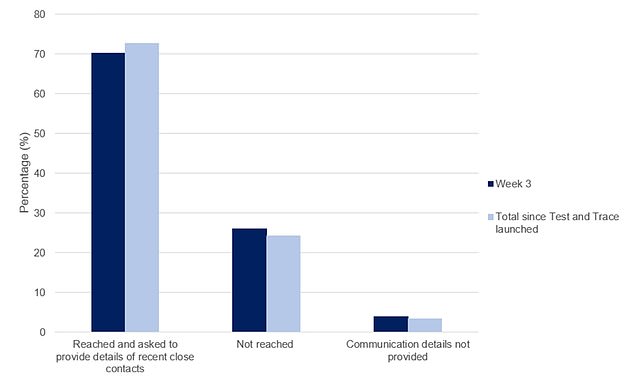 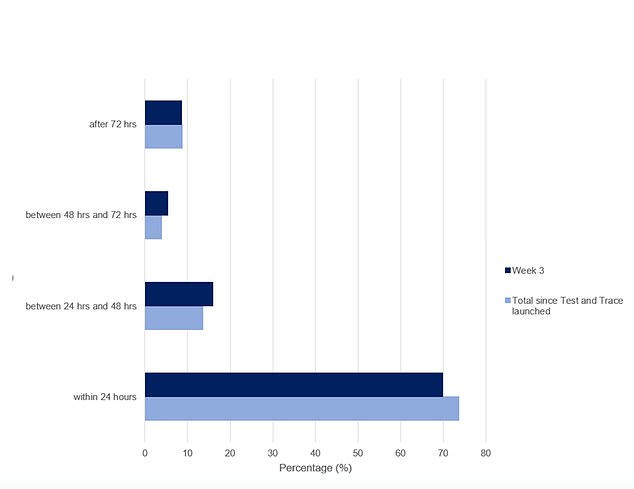 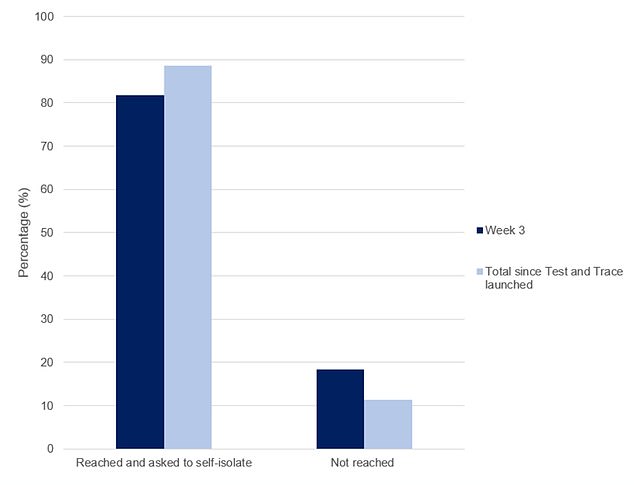 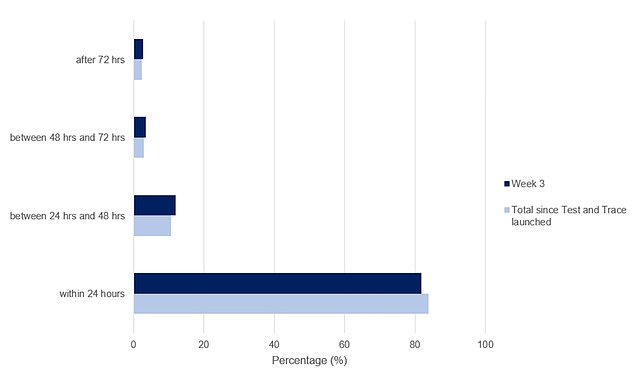 Revealed: Most contacts were reached within 24 hours – but it took more than three days for a fraction of the contacts

UP TO 10,000 CARE HOME RESIDENTS AND STAFF WILL GET MONTHLY COVID-19 TESTS

Up to 10,000 care home residents and staff in England will get monthly coronavirus tests, the government announced today.

Health officials have launched another surveillance scheme in hope of tracking how Covid-19 spreads through nursing homes around the country.

Care minister Helen Whately — who has come under fire for appearing to blame scientific advisers for the catastrophe that unfolded in care homes — said the results will help plan to prepare care homes in the future.

In the first wave of the UK’s Covid-19 epidemic, care homes have been battered and more than 14,000 residents have died with the virus in England and Wales alone.

Ministers were accused of overlooking care homes in a scramble to provide for the NHS and bosses have repeatedly called for regular testing in their facilities.

The new testing programme will be carried out at 106 care homes run by Four Seasons, with thousands of residents and staff tested for past and present infection.

It comes after it was reported today that health chiefs are planning to turn dozens of empty shops into walk-in coronavirus testing centres in Britain.

Many people who don’t drive are unable to use drive-in testing centres, leaving them with only an at-home test option unless they’re in hospital – but these are in high demand.

The Government is now hoping an app made by Apple and Google, which officials also decided was unfit for purpose, will improve enough to be usable.

Professor Keith Neal, an epidemiologist at the University of Nottingham, said today’s statistics were concerning.

He said: ‘There are number of issues currently with the system – these can only be sorted by members of the public as it requires individuals to take the appropriate actions to reduce spread.

‘The number of people who are thought to have Covid-19 is much higher than the numbers testing positive – more people need to come forward for testing that is now much easier to access.

‘One in four positive people can’t be contacted – this is surprising and worrying – these people need to provide details to get the result of their test and they have a responsibility to be contactable, they should anyway be isolating at home so easy to get hold of.

‘There has been a drop in the percentage of contacts who have been contacted from 90 per cent to 80 per cent, but this is still not a bad figure.

‘It’s unclear how much contact tracing is being done by the national system compared to Public Health England. Identifying contacts in an outbreak in a care home is much easier, the residents and staff are all easy to get hold of.

‘Every contact contacted is a possible chain of transmission stopped.’

Justin Madders, Labour’s Shadow Health Minister, said: ‘To have a quarter of those who test positive not contacted three weeks in to the “world beating” system is not good enough and urgently needs to be addressed.

‘Expert opinion shows that to defeat this virus we need a fully functioning test and trace system, so these latest figures still raise major concerns the week before lockdown measures are eased further, especially without a working app.

‘It is staggering that hundreds of people are not submitting their details into the system in the first place. Surely that should be one simple thing that can be fixed.

‘Ministers need to level with the public about how they are going to tackle these real and serious issues as a matter of urgency.’

Executive chair of NHS Test and Trace, Dido Harding, said: ‘The strength of NHS Test and Trace lies not just in our thousands of trained tracers, but in the public playing their part – providing us with the vital information we need to stop the spread of coronavirus, protect our families and communities, and ultimately save lives.

‘So as lockdown measures are eased, I continue to urge all those experiencing symptoms – a high temperature, a new, continuous cough, or a loss or change to your sense of smell or taste – to book a test immediately.

‘We also need everyone who is contacted by NHS Test and Trace to respond to our calls, texts or emails and to follow the advice the receive.

‘As we have seen from the start of this pandemic, it will take all of us working together to stop the spread of the virus in our communities and that will continue to be true as the country starts to open up again.’

Hit and run victim, 47, who was deliberately mown down in supermarket car park

Leo Varadkar’s negotiation tactics with EU over Irish border shamed: ‘That was wrong’

Negative interest rates: Bank of England hints at measure being introduced
5 mins ago

Selling Sunset: Who has left The Oppenheim Group? 'The brokerage has split'
7 mins ago

Selling Sunset: Who has left The Oppenheim Group? 'The brokerage has split'

COVID warning: Do your eyes look like this? The subtle sign of coronavirus you may miss
10 mins ago