At Amazon's new 'Luxury Stores,' you can't buy anything unless you're invited
Beyond Meat is coming to Alibaba's grocery stores in China
Smart devices could help save the world's honey bees


Exasperated residents of Manhattan’s Chelsea district say they are tired of complaining to the authorities about a sprawling homeless camp that has taken root in their midst.

Around 20 people are believed to be living along West 24th Street, on the corner with Sixth Avenue, The New York Post reported.

The camp is one block from the landmark Flatiron Building, and Madison Square Park.

Bill de Blasio, mayor of New York, promised three weeks ago to resolve the depressing scene but nothing has been done, and locals told the paper that they were fed up.

On July 23 he said he would do ‘whatever it takes’ to ‘have it addressed right away’, but the camp has only grown. 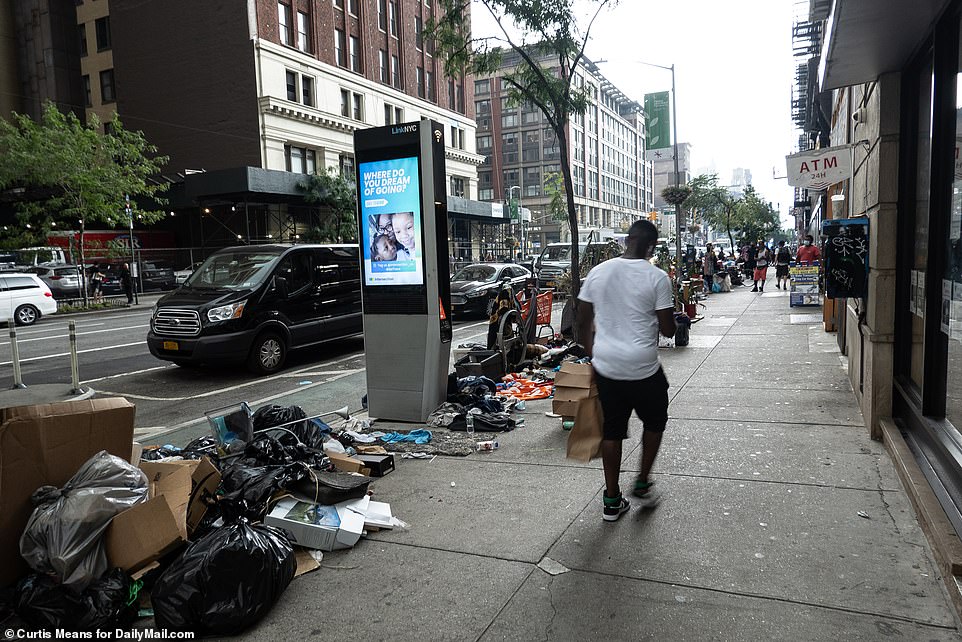 The block, running along West 24th Street on the corner with Sixth Avenue, has become a dumping ground for trash 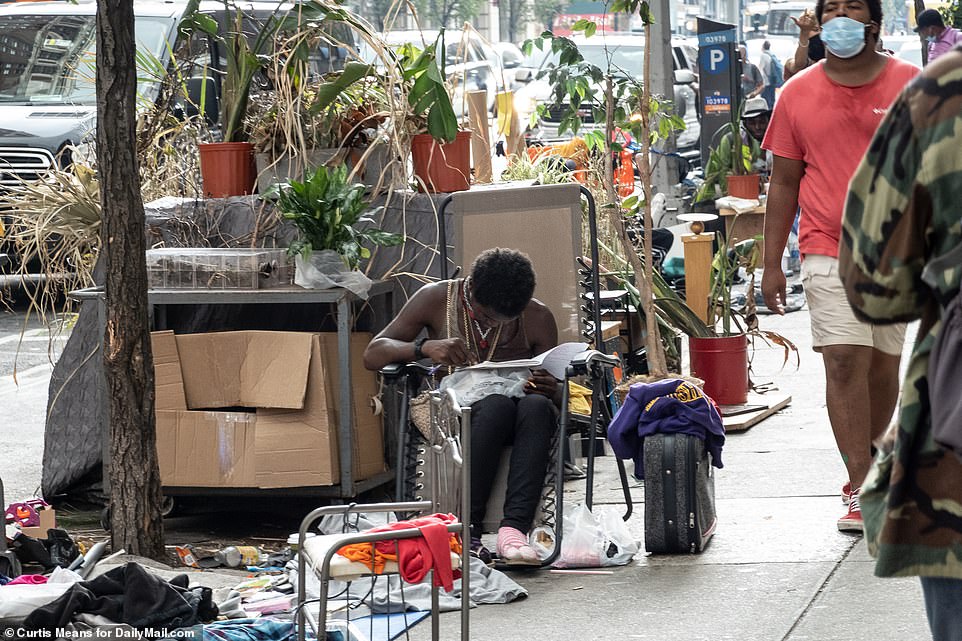 Homeless people have moved in to the street, making use of the furniture thrown out by fleeing New Yorkers

‘They block the door. I ask them nicely to move and they want to fight,’ he told the paper.

‘They harass the customers. How can you do business in an environment like this?’

Some have constructing makeshift shelters out of flower pots, plastic gates or shopping carts. Others have claimed doorways to sleep in as their own.

With an estimated 500,000 people having left the city since the pandemic begun, abandoned furniture abounds, and homeless people have crafted their own shelters.

Richard Charlton, owner of Sixth Avenue’s A+ Access Locksmith, agreed that it was harming his business.

‘I have a lot of customers that complain,’ he told the paper.

‘They don’t want to come down this block.’

He said the homeless people begun arriving when the area was shuttered due to the pandemic, and ‘never left’.

‘They just kept on coming,’ he said. 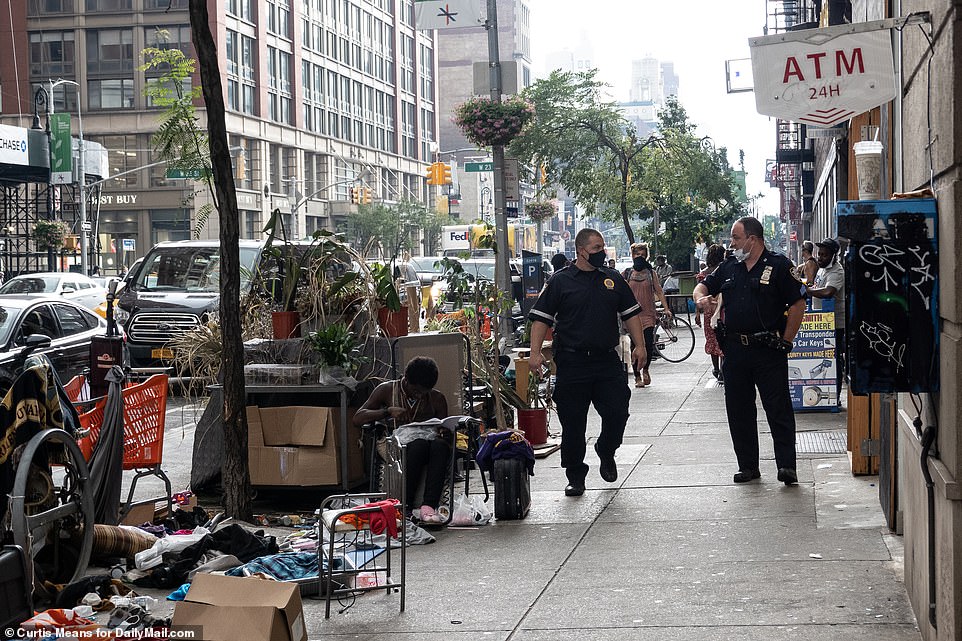 Members of the NYPD walked along Sixth Avenue on Wednesday, but did not take any action about the chaos 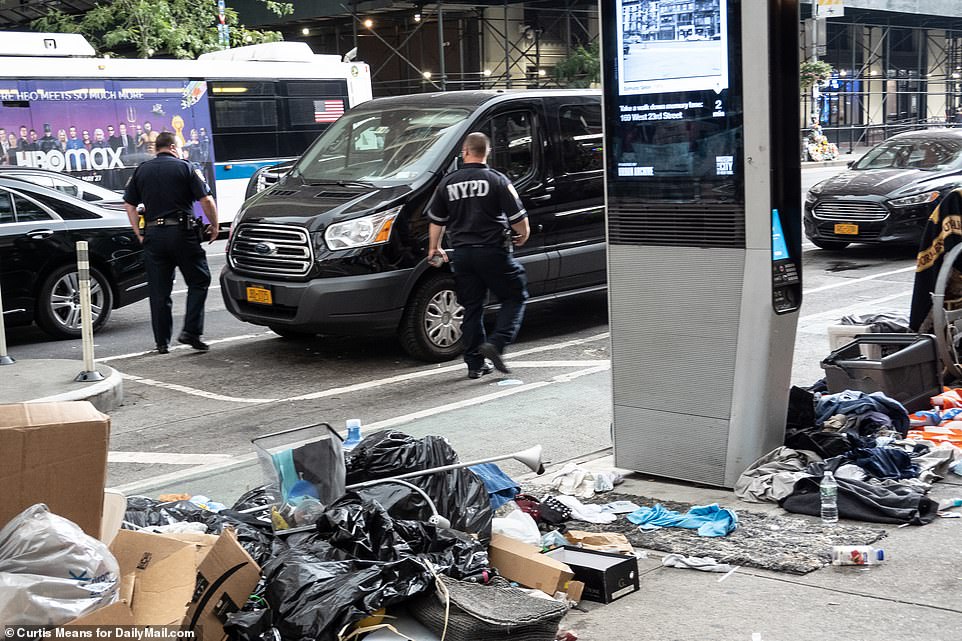 The officers left without doing anything to improve the situation, which is unsanitary and unsafe for all concerned 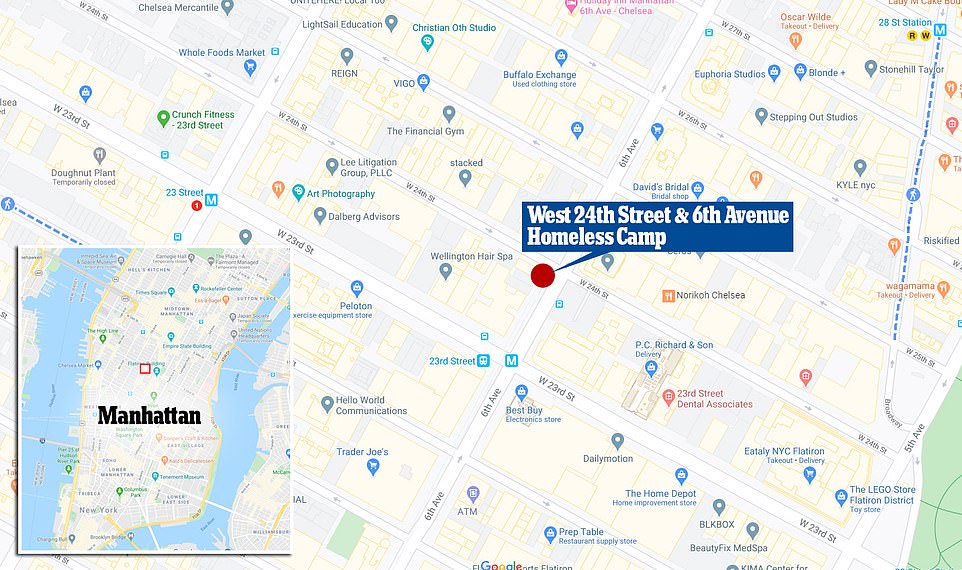 The camp has sprung up in the heart of Manhattan, one block from the Flatiron Building in Chelsea

Charlton, whose store was closed between March and June, said it was disheartening to weather one storm only to return to another.

‘I was almost at the brink of shutting down,’ he said. ‘It’s overwhelming to be shut down for so long — business is slow — and to come back to this? It’s discouraging.’

The owner of The Corner Cafe said he has called the police ‘almost 20 to 30 times’ over the past two months for various issues with the encampment.

When the police would respond at all, the homeless simply moved away until the police left, then circled back, he said.

A third clean-up is being scheduled, the spokesman added, noting that individuals at the encampment have previously declined services.

A Sanitation Department car visited the intersection on Wednesday, the New York Post reported, with a worker taking photos of the scene.

‘We clean up and they come back every day,’ said the worker.

He said his bosses wanted to see the images.

‘They just want us to take pictures every day.’

The Chelsea homeless camp is far from the only one troubling Manhattan at the moment.

In the East Village, homeless people sheltering under scaffolding near St Mark’s Place have been repeatedly cleared away, only to return.

And in the Upper West Side, a homeless camp near 79th Street and Broadway is causing misery for locals.

Cardi B sued for defamation by group of Long Island beachgoers

Is England heading for a HALF-TERM lockdown? 0