More than 10,000 Melbourne residents have refused coronavirus tests as the city battles a huge outbreak.

On Friday health minister Jenny Mikakos revealed that 164,000 people have been tested but many refused because they do not believe that coronavirus exists.

Several conspiracy theories falsely claiming the virus is a hoax have circulated online, including one by anti-vaxxers who claim it was made up to encourage citizens to get vaccinated for other diseases. 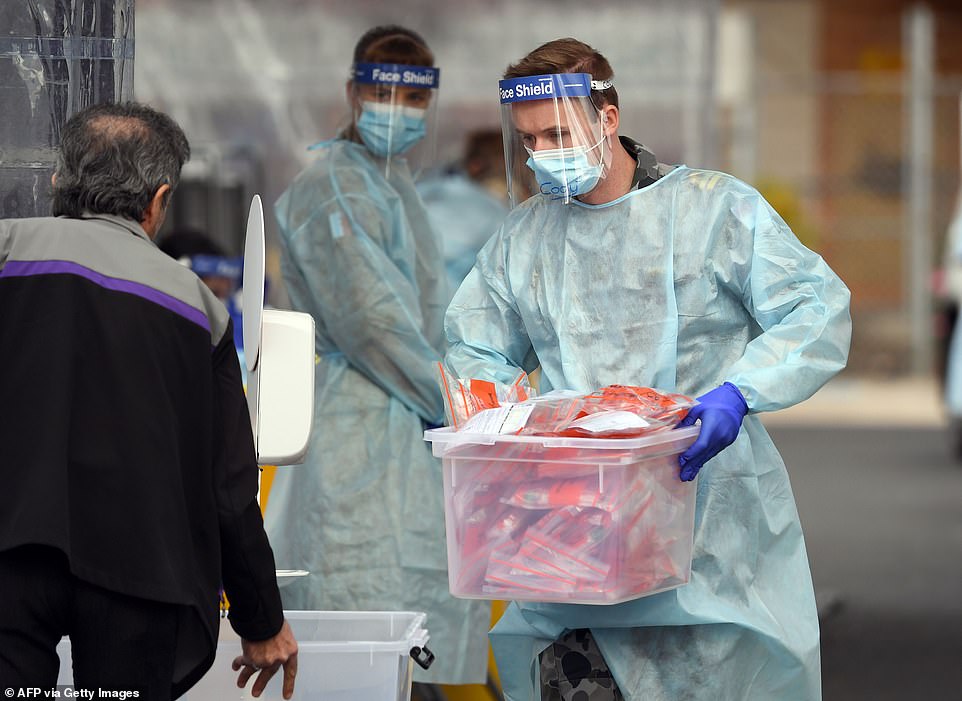 ‘Disappointingly, we have had more than 10,000 people who have refused to be tested,’ Ms Makakos said in a press conference today as 66 new cases were recorded.

‘That might be for a range of reasons, including that they may have already been tested in a different location.

Ms Mikakos urged residents in 36 north Melbourne suburbs that have been placed back into lockdown to get tested as soon as possible.

‘It can go through your family very quickly, it can affect your neighbours, your loved ones, and your entire community,’ she warned.

Ms Mikakos also revealed that a single person, a so-called ‘super-spreader’, could be to blame for the recent surge that has seen 355 new cases since Monday.

‘On Tuesday, I received a briefing of a genomic sequencing report that seemed to suggest that there seems to be a single source of infection for many of the cases that have gone across the northern and western suburbs of Melbourne,’ she said.

‘It appears to be even potentially a super spreader that has caused this upsurge in cases.

‘We don’t have the full picture yet and, as Chief Health Officer Brett Sutton explained the other day, not all of these cases have yet been subject to genomic sequencing.’ 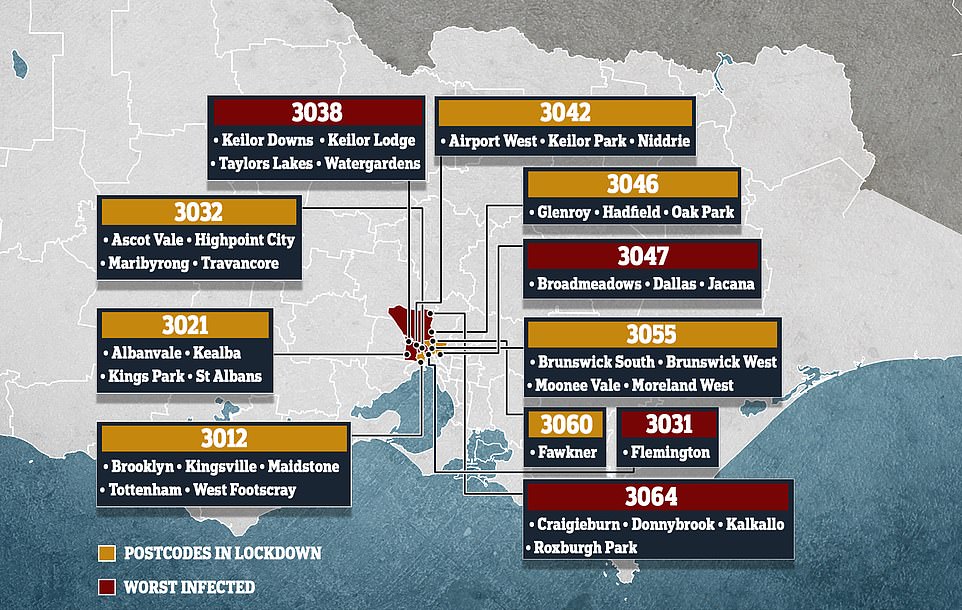 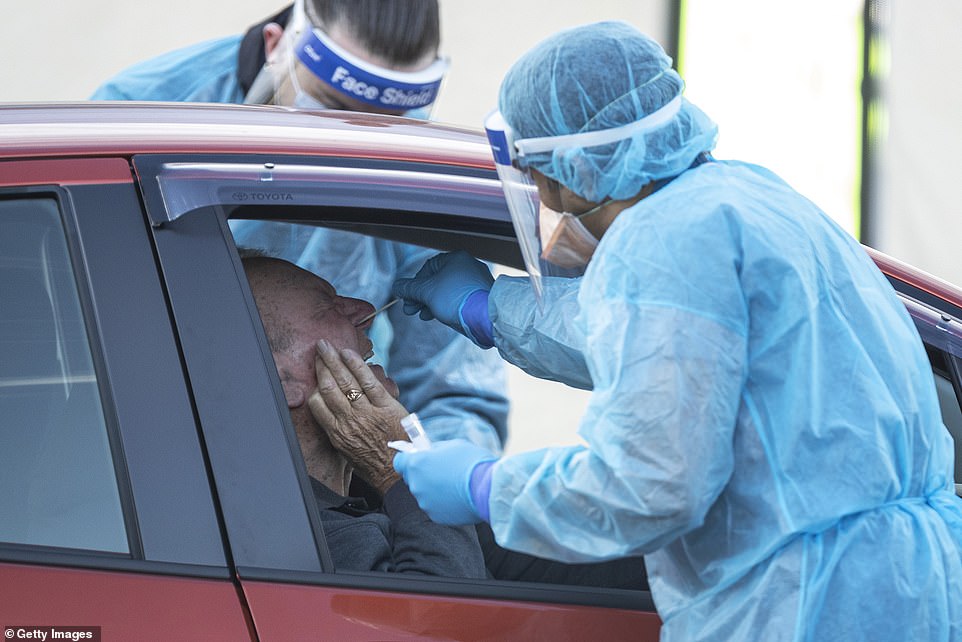 A resident is given a COVID-19 test at a pop-up site in Broadmeadows on July 1. Victoria reported 66 new cases on Friday 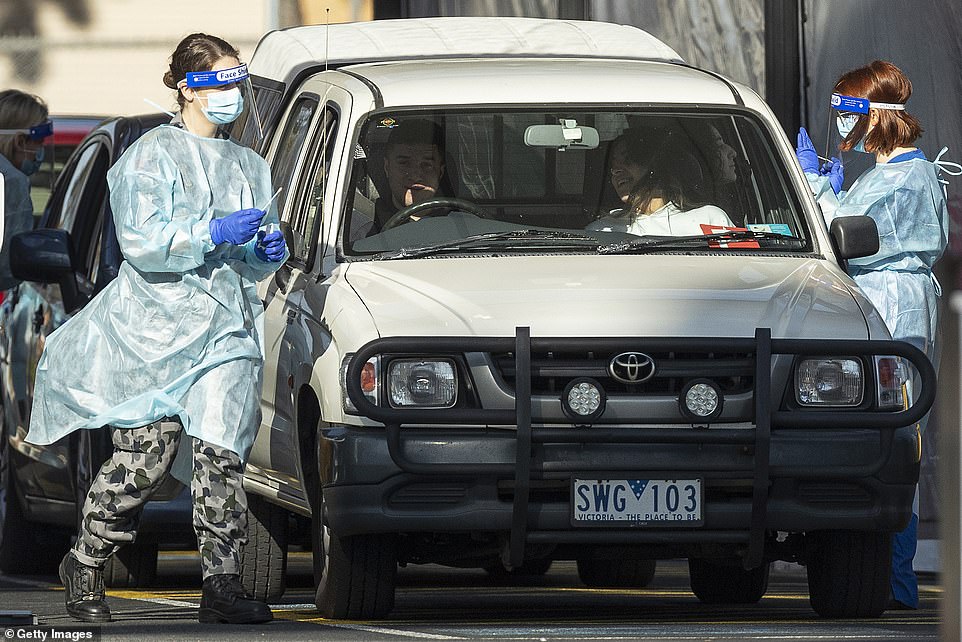 Residents are given a COVID-19 test at a pop-up site in Fawkner on July 1 in Melbourne. Victoria is suffering a huge oubreak

How many active cases are in each postcode?

A total of 23 patients are in hospital with six fighting for life in intensive care as the state suffers what appears to be a second wave of the deadly virus.

Melbourne’s north west, where 36 suburbs have been shut down, has suffered the most cases with postcodes 3064, 3047, 3031 and 3060 recording the highest totals this week.

Premier Andrews thanked residents who have gone back into lockdown but said he ‘cannot rule out other suburbs being shut down’.

The outbreak has been traced to breaches in Melbourne’s hotel quarantine system and an inquiry has been launched.

Some guards breached health protocols and even allegedly had sex with returned travellers and took them to McDonald’s.

Mr Andrews is facing criticism for hiring private security guards instead of the ADF to enforce the quarantine.

Asked about that decision on Friday, Mr Andrews insisted that it was never National Cabinet policy to have troops enforcing quarantine even though other states such as NSW were using them.

He admitted that he refused an ADF offer to help transport returned travellers to hotels – and used private company Skybus instead – but said transportation ‘has not been the problem’.

The Premier said it was ‘pleasing’ that the positive case numbers had stabilised rather than ‘doubling’.

On Thursday, a man in Darwin tested positive after catching the disease in Victoria before a Woolworths worker, who was cleared to leave Melbourne quarantine after bringing the virus from Bangladesh, was also diagnosed with COVID-19 in Sydney.

Victorian health officials said on Friday that the Sydney worker was allowed out of quarantine without a second test because he had been symptom-free for ten days since contracting the disease and was no longer infectious even though he was still ‘shedding’ the virus. 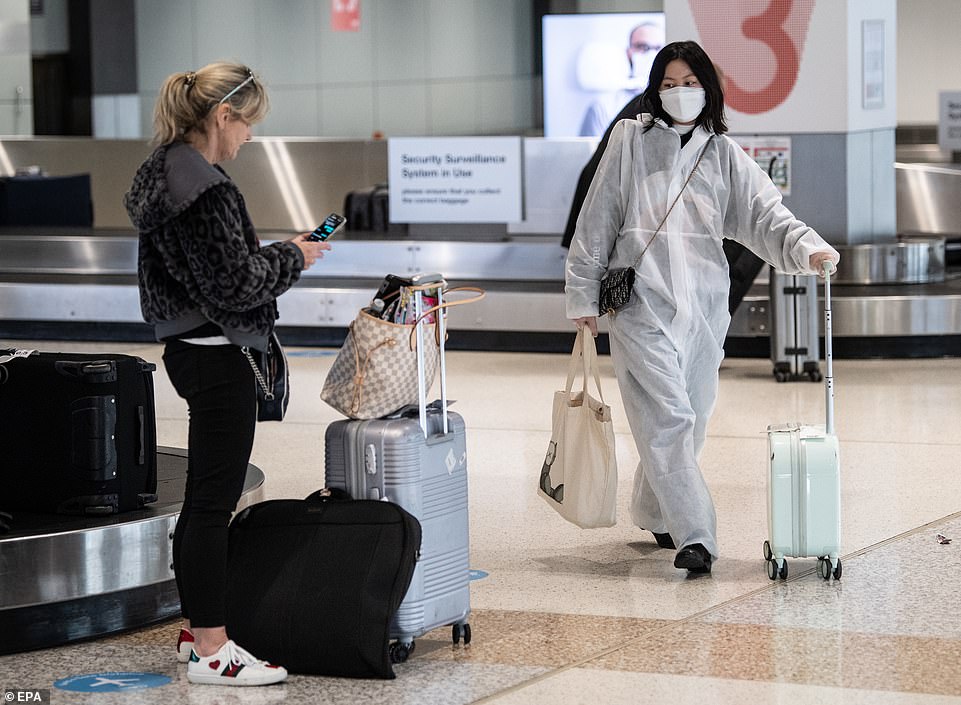 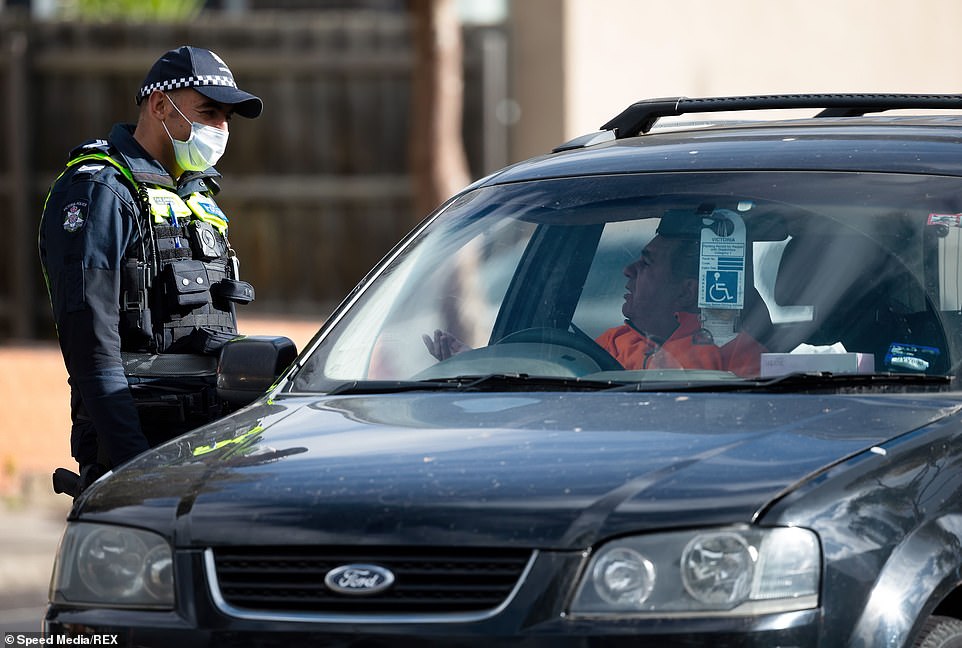 Police Officers check reasons for not being at home in a booze bus-style random checkpoint on Camp Road, Broadmeadows 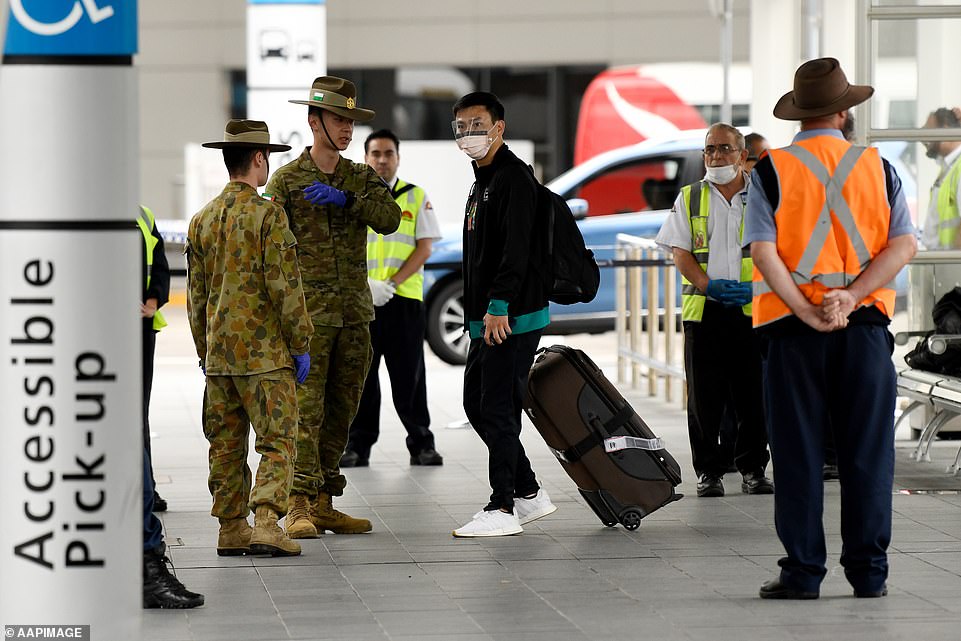 New South Wales has used ADF troops (pictured in Sydney) to enforce the quarantine of more than 25,000 returned travellers without suffering any major outbreaks 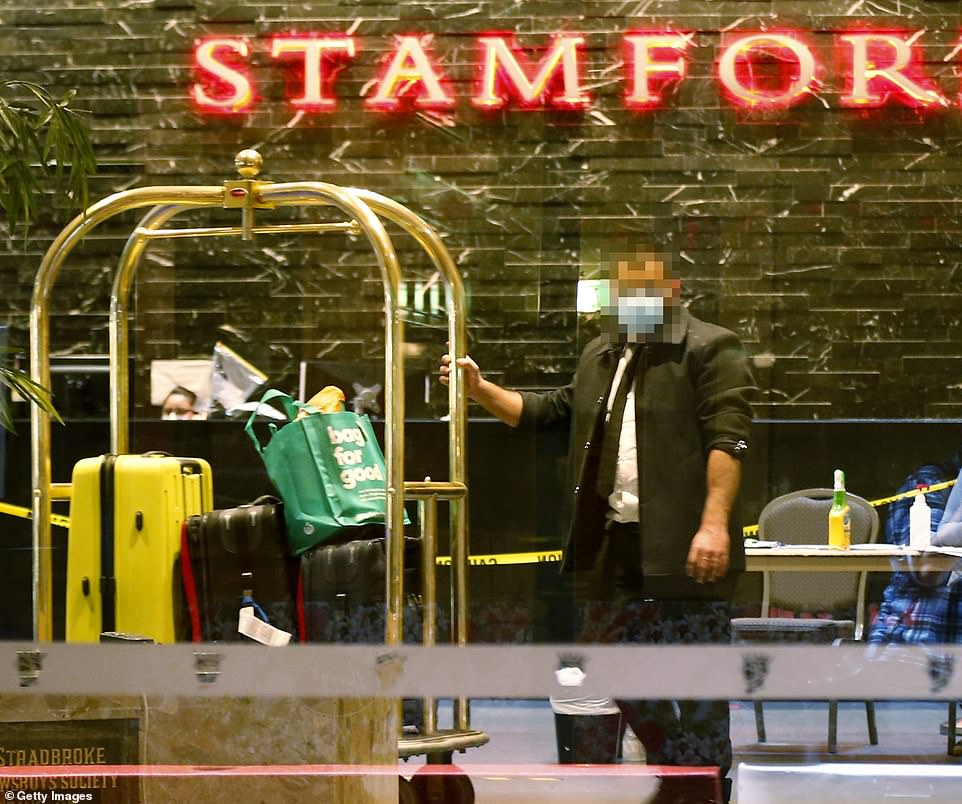 The Ruby Princess cruise ship was allowed to dock in Sydney on 19 March before 2,700 people disembarked without COVID tests. More than 300 passengers were infected and 22 have died.

‘It feels like Victoria is a bit like the embarrassing uncle at the dinner table,’ Mr O’Brien told Sunrise on Friday morning.

‘This is Victoria’s Ruby Princess in a way.’

Mr O’Brien called for Ms Mikakos to resign and say sorry to Victorians for the hotel fiasco.

‘The Victorian government has let the rest of the country down,’ he said.

‘Frankly, heads should roll. I’ve said that the health minister really needs to go. There has to be accountability when these sorts of mistakes happen.

‘It’s not about finger-pointing it’s about being accountable for the job you’ve got to do and the health minister has completely bothched this and at least she should fall on her sword and apologise to Victorians and the rest of the country for what’s happened here.’

He added: ‘This shouldn’t have happened, what has happened isn’t bad luck, it’s bad decision making from a government that put unqualified, untrained and unprofessional security guards in charge of hotel quarantine.’

Victoria’s outbreak comes less than four weeks after it stamped out the disease when zero new cases were recorded on June 5.

Ms Mikakos has blamed Victoria’s outbreak on ‘large family gatherings’ but health officials have admitted that ‘dozens’ of cases can be traced back to breaches in the hotel quarantine system. 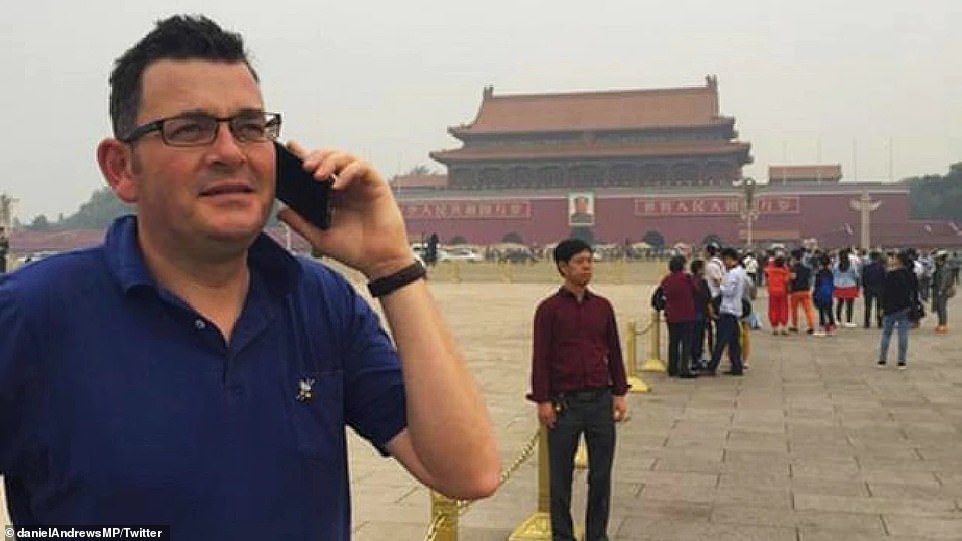 Victorian Premier Dan Andrews (pictured in Beijing’s Tiananmen Square) has lost support among his voters during the state’s recent spike in coronavirus cases. He made the mistake of using private security guards to enforce hotel quarantine

Since March, Victoria has quarantined more than 18,000 travellers returning from overseas but, unlike other state leaders, Mr Andrews chose to enforce the quarantine with private security guards instead of the police and defence force.

It has since emerged that security guards breached infection protocols by mingling with guests and failing to use personal protective equipment properly.

Daniel Andrews adopted a rogue plan, which bucked the consensus of National Cabinet. He has put other states at risk

Insiders have also alleged that some guards fell asleep on the job, shook hands and even slept with hotel guests.

‘There’s been closer mingling of these guards than we would like in the workplace,’ she said.

More than 60 cases can be traced back to two quarantine hotels in Melbourne’s CBD – the Stamford Plaza and the Rydges on Swanston – after workers and guards caught the virus and took it back to their friends and families.

By contrast, New South Wales has used ADF troops to enforce the quarantine of more than 25,000 returned travellers without suffering any major outbreaks. 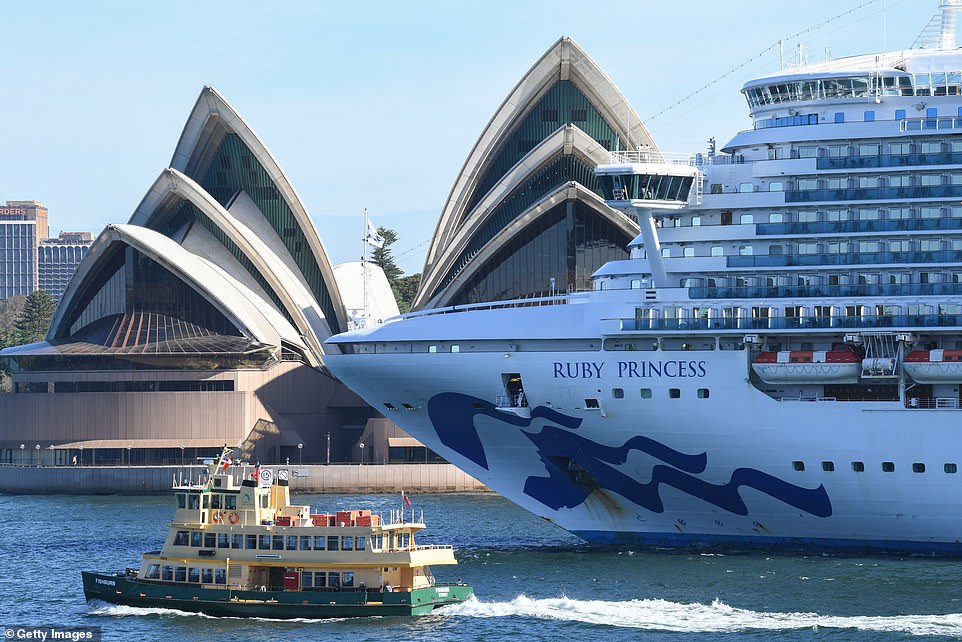 Victorian Liberal MP James Newbury told Daily Mail Australia that the decision to use private contractors has ‘put other states at risk’.

‘Daniel Andrews adopted a rogue plan, which bucked the consensus of National Cabinet, and used private contractors to manage hotel quarantine instead of the trusted Defence Force,’ he said.

‘His rogue strategy has failed and the pandemic is out of control in Victoria which is putting other states at risk.’

In a scathing assessment of the premier, the state MP for Brighton in south-east Melbourne said: ‘Mr Andrews and his government are directly responsible for this second wave’. 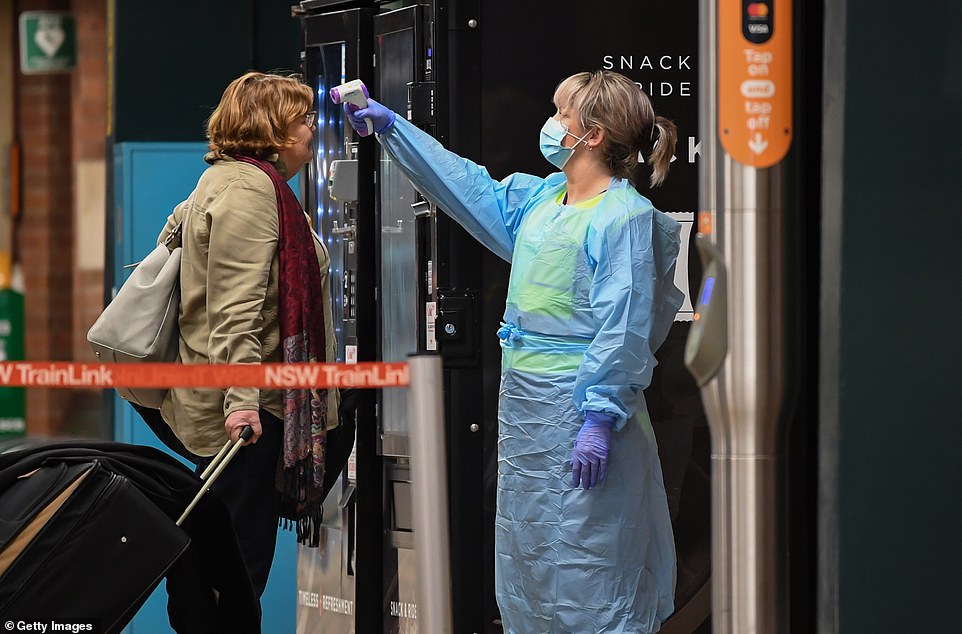 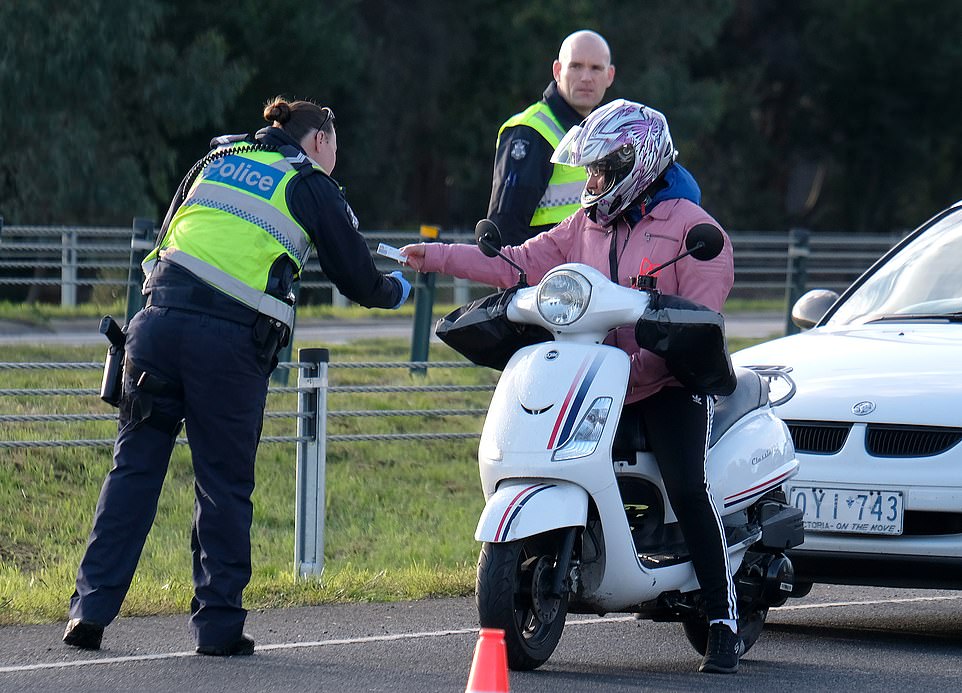 A police officer on the Melton Highway near Brimbank inspects the drivers licence of a moped driver on Thursday. Booze bus-style operations began across the Brimbank council area as part of localised restrictions across 10 post codes to slow a second wave outbreak of COVID-19

Holidays: Spain and Portugal ditched for new British favourite – it's not where you think
3 mins ago

Holidays: Spain and Portugal ditched for new British favourite – it's not where you think