A mother-of-two downed two bottles of vodka before driving to McDonald’s because she was ‘hungry’, and wound up ploughing into another car.

Kim Maree Kurki, 52, was four times over the limit when she rear ended another car near Calamvale McDonald’s in Brisbane’s south around 7.40pm on April 1.

Police spotted her making a rather slow getaway, driving at just 10km/h before pulling her over.

Kurki then blew a blood alcohol reading of 0.222 per cent, before officers watched her take ‘approximately five minutes’ to put her seatbelt on when put in a police car. 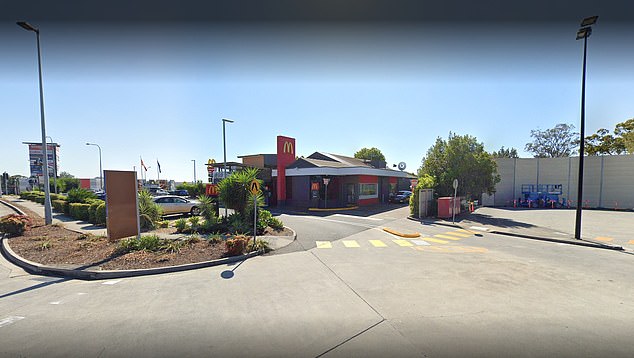 Kim Maree Kurki, 52, was four times over the limit when she crashed into another car in Calamvale after driving to McDonald’s (pictured McDonald’s in Calamvale)

The 52-year-old told police she didn’t want to stop because she was ‘worried she was going to be arrested’, Senior Constable Pedersen said, The Courier Mail reported.

‘Police observed the defendant take approximately five minutes to put on her seatbelt in the police vehicle,’ he said.

Kurki pleaded guilty to failing to give required particulars at a crash and driving under the influence of alcohol on Wednesday at Richlands Magistrates Court.

Defence lawyer Garry Wooler said the mother, who also suffers from mental health problems, had turned to alcoholism during isolation because the lockdown became ‘too much’ to handle.

Kurki’s two children live with her ex-husband who Mr Wooler said has no ‘sympathy’ for her.

‘Her mental health issues impact on her ability to make decisions and come to terms with the loss of her children,’ he said.

‘I wish you well in beating your addiction … but don’t make your issue someone else’s issues, don’t take to the road,’ he said.

Kurki was fined $2,000 and disqualified from driving for two years.

She is receiving help for her dependency on alcohol.

Heartbroken family of disabled man, 18, turned up to hospital to be told he had died