Motorists are facing the worst weekend on the roads in five years... and the rain could put a dampener on things as more than 10 milli

By Tom Payne Transport Correspondent For The Daily Mail

Motorists embarking on a post-lockdown getaway today are set to face the worst weekend traffic for five years.

More than 10million Britons are expected to hit the road as pubs, restaurants, hotels and campsites reopen after three months, the RAC said. Its surveys suggest this marks the busiest non-Christmas or Easter weekend since the 2015 August bank holiday.

Its research found 6.5million are planning overnight stays with friends or family following the relaxation of lockdown restrictions. Around 2million will drive to campsites, with another 680,000 heading for caravans. A further million are set to stay in hotels and B&Bs. 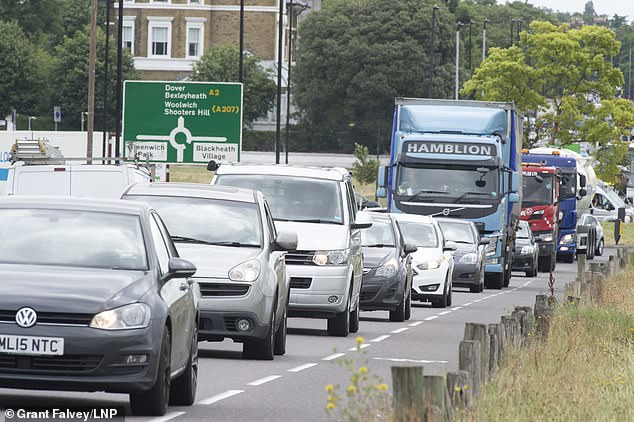 More than 10million Britons are expected to hit the road as pubs, restaurants, hotels and campsites reopen after three months, the RAC has predicted

The AA said route planner searches suggest the M25, M6, M5 and M1 will be particularly busy – but stressed poor weather could see many scrap their plans and stay at home.

As well as the traffic, drivers face motorway petrol prices of up to 139.9p a litre – compared with the national averages of 110.85p for unleaded and 114.96p for diesel. In some cases, service stations are 34p more expensive than forecourts a few miles off the carriageway – adding almost £20 to the cost of filling up a 55-litre family car.

During the lockdown, petrol fell to an average low of 106.48p a litre with supermarket prices dipping below 99p. However, these have now increased sharply to reflect the soaring value of crude oil.

Some of the biggest price hikes are in areas set to be deluged with visitors this weekend, including the South West, East Anglia and Wales. 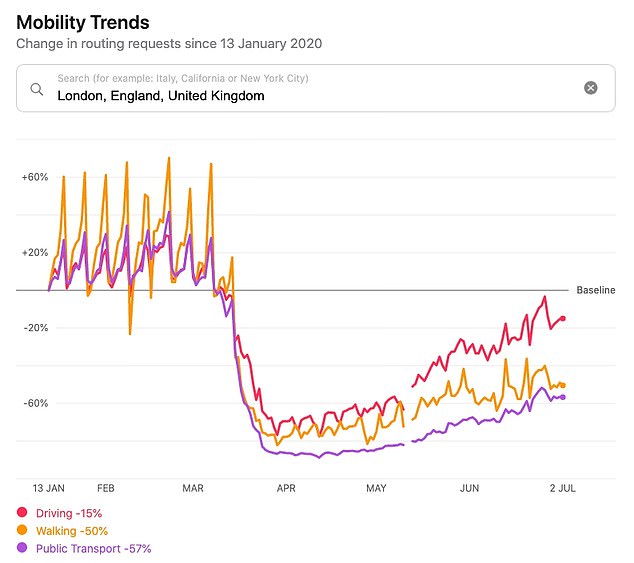 The AA said route planner searches suggest the M25, M6, M5 and M1 will be particularly busy – but stressed poor weather could see many scrap their plans and stay at home. Pictured: Drivers have been climbing back towards pre-Covid levels 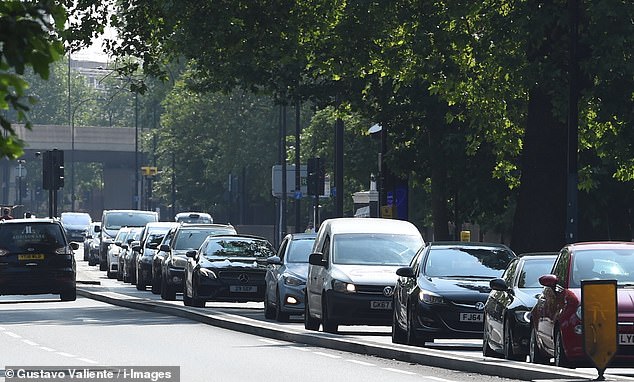 RAC spokesman Simon Williams said: ‘While those who continued to drive regularly throughout the pandemic will have benefited from some very low prices, millions won’t have – so [they] will be disappointed that just as they start to drive more prices are on the up.

‘It is, of course, the lack of demand for fuel which caused prices to drop in the first place so sadly it’s no great surprise that they’re on the rise again.’

Motorists have also been urged to leave extra time for journeys due to 50mph limits on major routes due to roadworks.

Highways England stressed that drivers should check their vehicles before they set off, as many will not have embarked on long journeys for weeks.

Head of road safety Richard Leonard said: ‘Checking your tyres, oil, water, lights and fuel doesn’t take long – but it will help keep you and your loved ones safe.’

But could rain put dampener on things?

Cloud, rain and gale-force winds are expected this weekend as lockdown restrictions ease – making beer gardens and outdoor restaurant tables a rather uninviting prospect in many areas.

Today is set to be mostly overcast across the country, with rain in Wales, the Midlands and North, and a maximum temperature of 19C or 20C (66-68F).

Some sunny intervals are expected in eastern areas by the afternoon.

Meanwhile, a weather warning has been issued for most of northern England tomorrow, where gale-force winds are predicted until 4pm. Gusts could reach 50-60mph and forecasters warn there may be damage to buildings, power cuts and flying debris.

It is due to be blustery elsewhere with winds of more than 30mph on exposed southern coastal areas, such as The Needles on the Isle of Wight.

The best of any sunshine tomorrow is expected in southern England and Wales, with highs of 22C (72F) in London.

A Met Office spokesman said the strongest winds are ‘most likely over and to the east of high ground, particularly the Pennines, which may lead to some travel disruption.’

Parkinson’s disease symptoms: The worrying sign in your feet to watch out for

Parkinson’s disease symptoms: The worrying sign in your feet to watch out for 0

Government's warning of 50,000 cases a day in October is based on few hundred positive cases 0

How to get rid of visceral fat: A simple diet swap that could help you shed the belly fat 0

Mississippi could have enough votes to redesign its flag, senior lawmaker says 0