New poll: Majority of Scots now in favour of independence

HARRY COLE: The day lobbying row tycoon Richard Desmond made a dizzying Boris Bike U-turn
Government is planning 'SEAT out to help out' plan to get theatres and stadiums open
Boris Johnson urges people to get back to offices in towns

A majority of Scots are in favour of Scottish independence, according to a new poll, with support for splitting from the UK now having been ahead for six months – the longest period ever recorded.

SNP leader Nicola Sturgeon has called for a second vote to take place before the end of this year.

But Boris Johnson has repeatedly refused to budge on the issue, with the UK Government declining to grant permission for another ballot.

A Panelbase poll published in the Sunday Times today put support for a ‘Yes’ vote in an independence referendum at 54 per cent and support for ‘No’ at 46 per cent.

Meanwhile, polling expert Professor Sir John Curtice said support for independence has now nudged ahead of support for the Union over a sustained period of surveys. 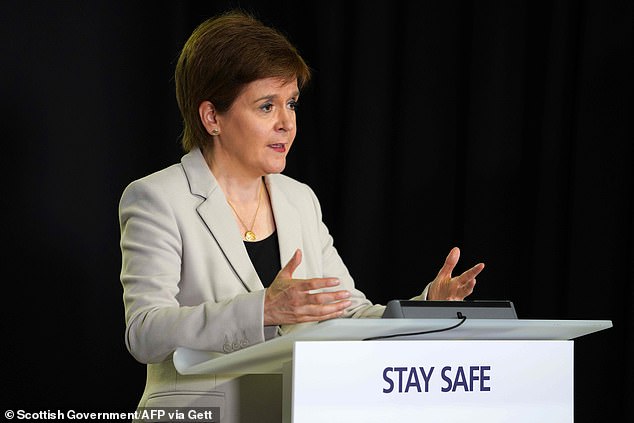 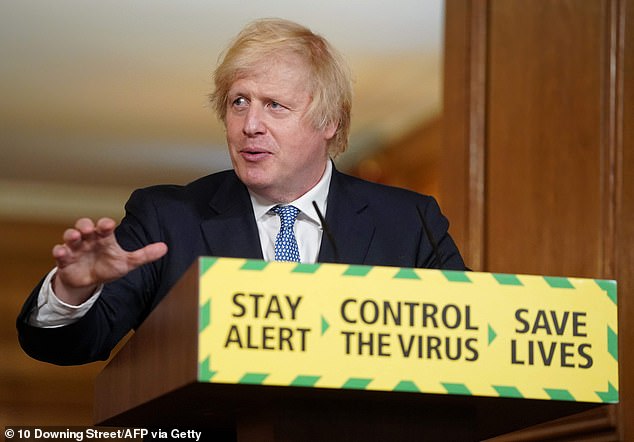 Sir John said the average of the Panelbase polls over the last six months, including the latest one, put ‘Yes’ on 51 per cent and ‘No’ on 49 per cent.

He said it is the first time in polling history that ‘Yes’ had been ahead for such a long period.

In an article for the Sunday Times, Sir John said: ‘Never before have the foundations of public support for the Union looked so weak.

‘Our latest poll from Panelbase confirms other recent polling that has suggested those who intend to vote Yes in a second independence referendum have nudged ahead.

‘Support for the SNP is also at a record high. Panelbase’s polls conducted over the past six months, including today’s, have on average put “Yes” on 51 per cent and “No” on 49 per cent.

‘This is the first time in polling history that “Yes” has been ahead over such a sustained period.

‘Support for independence is up three points on that recorded on average last year – and six points on 2018.’

He said those who had switched from ‘No’ to ‘Yes’ were among people who voted both Remain and Leave in the EU referendum.

The latest survey also found that the Scottish public appeared to support the Scottish Government’s handling of the coronavirus crisis much more than that of the UK Government.

The poll of 1,026 voters in Scotland, conducted between Tuesday and Friday last week, found strong backing for Ms Sturgeon’s handling of the coronavirus crisis, with the First Minister’s approval rating on the issue at 60 points.

However, Boris Johnson’s approval rating on the crisis was at minus 39 points.

SNP depute leader Keith Brown said: ‘The majority of polls since the Westminster election have had “Yes” in the lead – majority support for independence is now the established position of the people of Scotland.

‘On the basis of this sustained record support, it’s impossible for the UK Government to deny Scotland a choice over its future.’

Mouth cancer symptoms: The taste in your mouth that may signal the deadly disease

Mouth cancer symptoms: The taste in your mouth that may signal the deadly disease

Mouth cancer symptoms: The taste in your mouth that may signal the deadly disease 0

Mouth cancer symptoms: The taste in your mouth that may signal the deadly disease 0

Martin Lewis in retirement bombshell: 'I don't know how much longer I can do it' 0

Power season 6 recap: What happened at the end? Main plot points ahead of Power Book 2 0

Fury as thousands vow to 'Clap for Sturgeon' on birthday – 'I'll clap when she resigns!' 0

Boy, 5, dies after granite tabletop falls on his head at wedding reception 0

Drinker, 38, who broke coronavirus rules by refusing to sign in at a pub is charged 0