By Larisa Brown Political Correspondent For The Daily Mail

Three in ten reception class children are either obese or overweight in some parts of Britain, damning figures reveal.

Nationwide, a fifth of children – 22.6 per cent – aged four or five are considered fat, according to Public Health England statistics.

The worst areas are Knowsley, Merseyside, where 29.7 per cent of children are overweight or obese, followed by Hull (29.2 per cent) and Redcar and Cleveland (28.8 per cent). 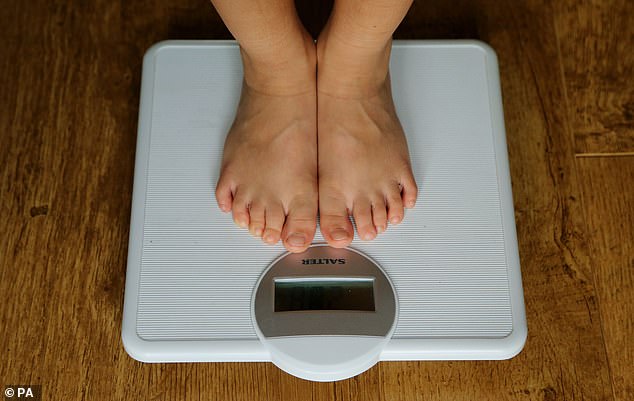 Three in ten reception class children are either obese or overweight in some parts of Britain, damning figures reveal [File photo]

Wolverhampton in the West Midlands was the only area in the top ten not in the North. Four were in Merseyside.

Kingston upon Thames had the lowest figure but even there 15.6 per cent of children are obese or overweight, according to the figures from last year uncovered by the Lib Dems.

The measurements were for pupils around England in their reception year.

Layla Moran, Lib Dem leadership hopeful, said: ‘We are losing the battle against obesity and we need to act before it’s too late. In some areas, nearly one in three children are obese by the time they reach school.

‘Obesity increases the likelihood of developing chronic diseases, disability and early death. The Government needs to tackle this public health crisis and recognise there isn’t a one-size-fits-all solution.

‘We need a holistic package of measures to invest in children’s mental health and well-being, to empower teachers to run tailored school sports plans and to educate and incentivise parents to make healthier choices.’

Around three in ten adults in England are clinically obese – a Body Mass Index above 30. The rate is among the highest in the western world. Obesity has been identified as a risk factor for dying of coronavirus.

According to data from NHS hospitals, 75 per cent of Covid-19 patients in intensive care are overweight, compared with 65 per cent in the general population.

Boris Johnson was reportedly convinced he ended up in intensive care with coronavirus because he was significantly overweight.

The Prime Minister apparently told friends he weighed 17 and a half stone when admitted to hospital, meaning he would be classified as clinically obese.

A Department of Health spokesman said: ‘We are determined to tackle the problem of obesity. We have already made huge progress towards our goal of halving childhood obesity by 2030 – cutting sugar from half of drinks on sale, funding exercise programmes in schools and working with councils to tackle child obesity locally.’ 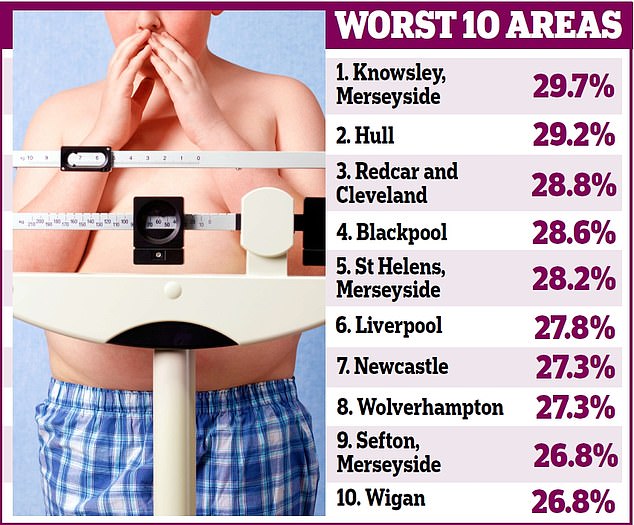 Nationwide, a fifth of children – 22.6 per cent – aged four or five are considered fat, according to Public Health England statistics

Other areas with lower rates of obesity and overweight children include Richmond upon Thames, Windsor and Maidenhead and Wandsworth. There were no figures for the City of London or the Isles of Scilly.

Mr Johnson has pledged to tackle the obesity crisis, noting that the UK is ‘significantly fatter’ than other European nations. He said this week that the UK would be ‘more resistant to diseases like Covid if we can tackle obesity’.

More overweight people could be prescribed Weight Watchers diet plans as part of the new drive to tackle obesity.

NHS prescriptions of Weight Watchers plans are only given to those at risk of Type 2 diabetes. They get nine months of help at a subsidised price.

Those who need to shed the pounds will also be encouraged to take 30 minutes exercise a day – just as they are encouraged to eat their five-a-day of fruit and vegetables.

This could involve following the exercise regime in a Joe Wicks video or another form of intense exercise.

Buck Moon meaning: What is the spiritual meaning of the July Full Moon?

Keir Starmer’s biggest weakness as Labour leader laid bare: ‘He has nothing to say!'

Protesters in MAGA t-shirts and hats march maskless through Target shouting 'take off your mask!'