The only sound that can be heard is the whirring of heavy machinery and banging of jackhammers.

Everywhere you look there are high-rises in various stages of construction, sitting alongside empty blocks that will soon, also, become home to soaring tower blocks.

Welcome to Parramatta in 2020 – where a once-sleepy patch of suburban western Sydney founded by the First Fleet in 1788 is being turned into Australia’s next big city.

The scale of the transformation – underpinned by $20 billion worth of development projects – is extraordinary.

Soon, Parramatta (known affectionately as Parra) will be bigger than Adelaide.

It will also be a multi-cultural behemoth.

In recent decades, the area’s white Anglo Saxon heritage has given way to an influx of cultures from across the globe.

Today, more than 65 percent of Parramatta’s population were born overseas and some 140 different languages are spoken in the area.

The Parramatta of today is defined just as much by its people as it is by its ever-expanding array of new buildings. 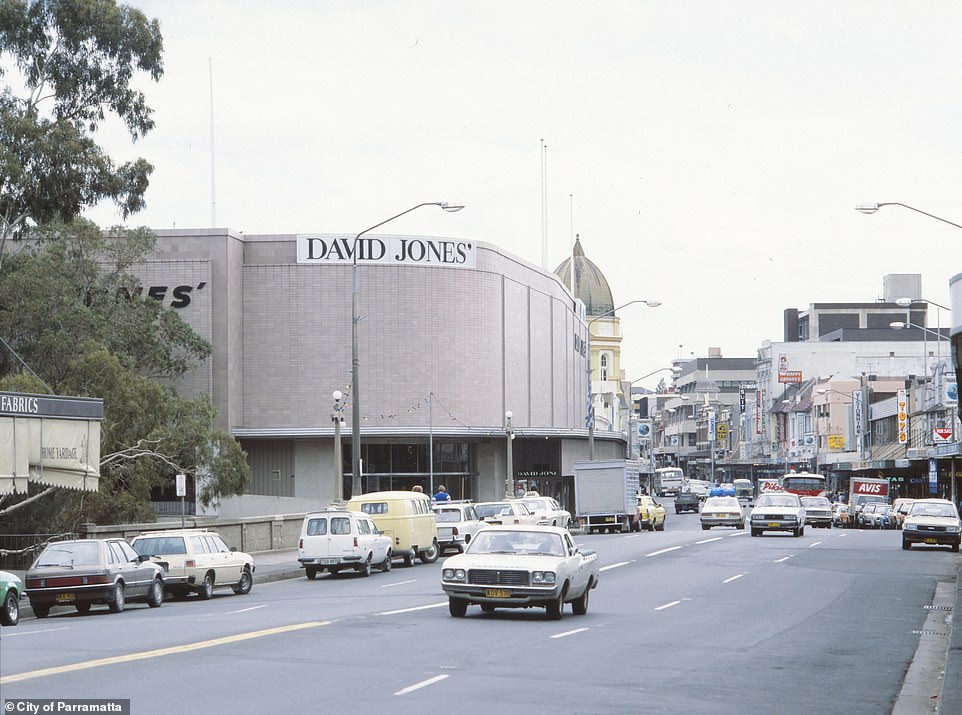 In the 1980s popular department store David Jones sat at the head of Church Street in Parramatta, right next to the river 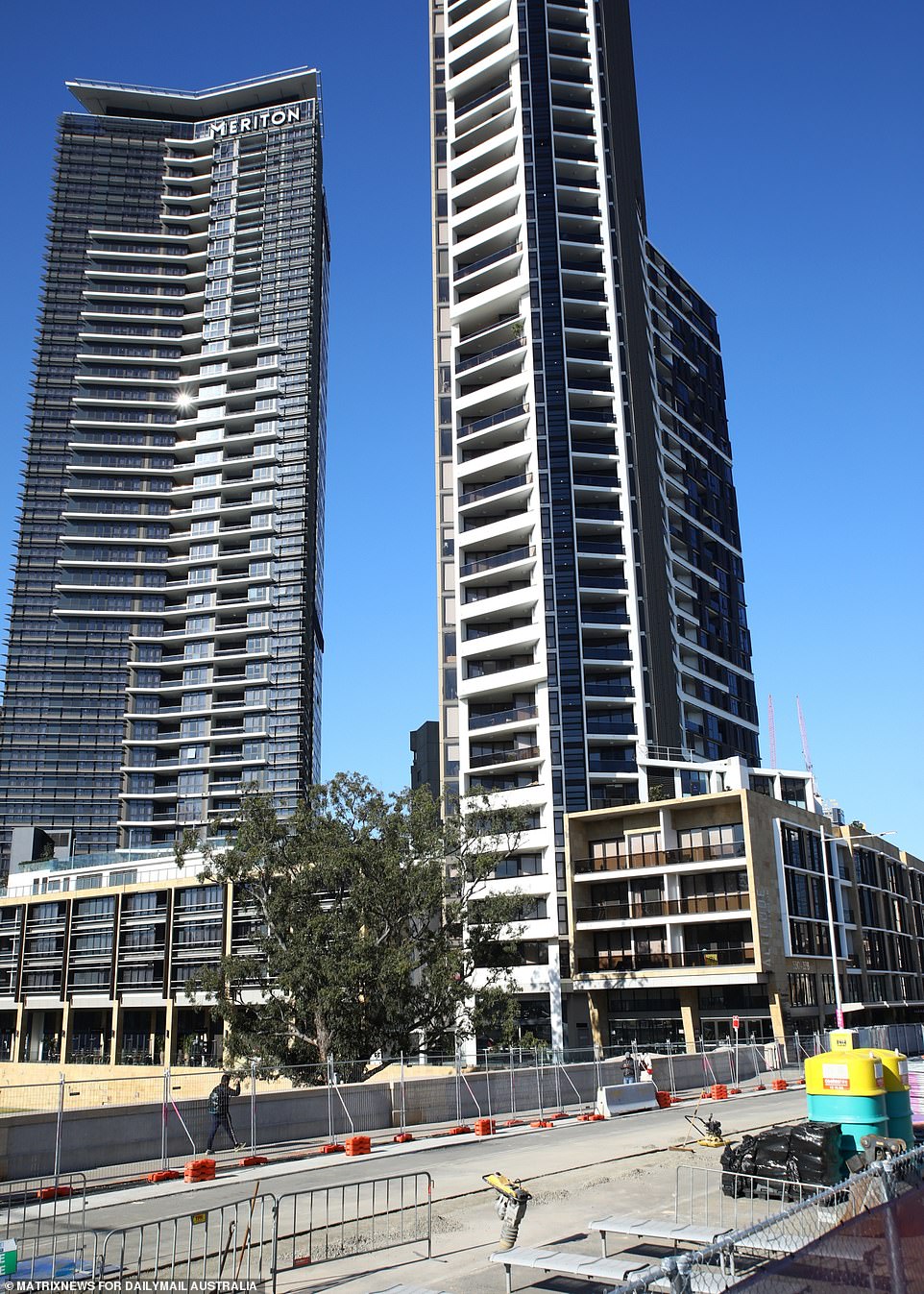 Now it has been replaced by two high-rise towers, a sign of the times with Parramatta transforming into a major city over the coming decades 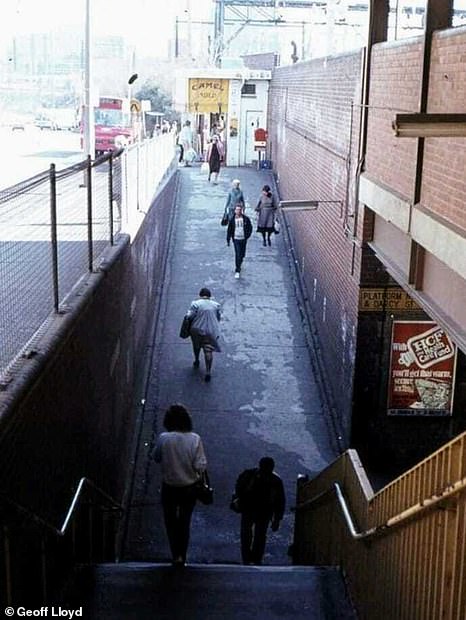 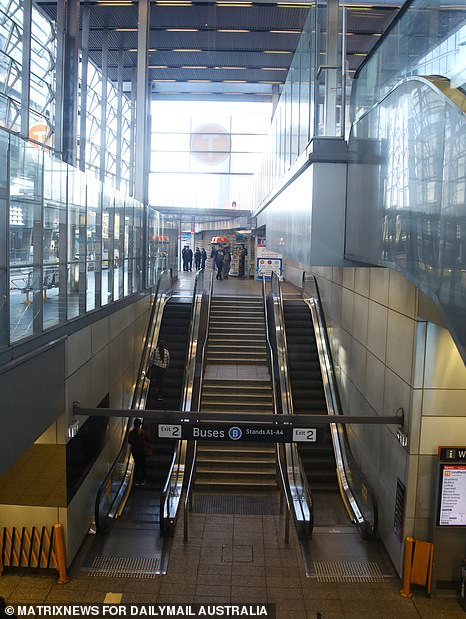 One of the biggest improvements to Parramatta in recent years has been to infrastructure such as the train station, which is a far cry today from that which greeted locals in 1985 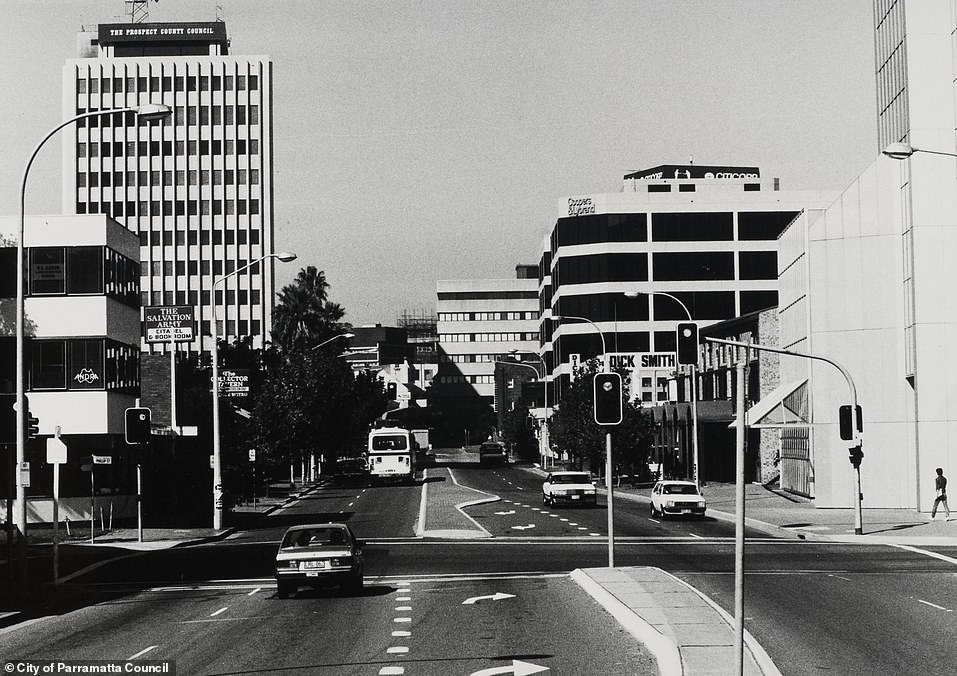 A number of the handful of tall buildings in Parramatta in the 1980s sat on Smith St, including law firms and council offices, while on the left of the photograph sat The Collector Tavern 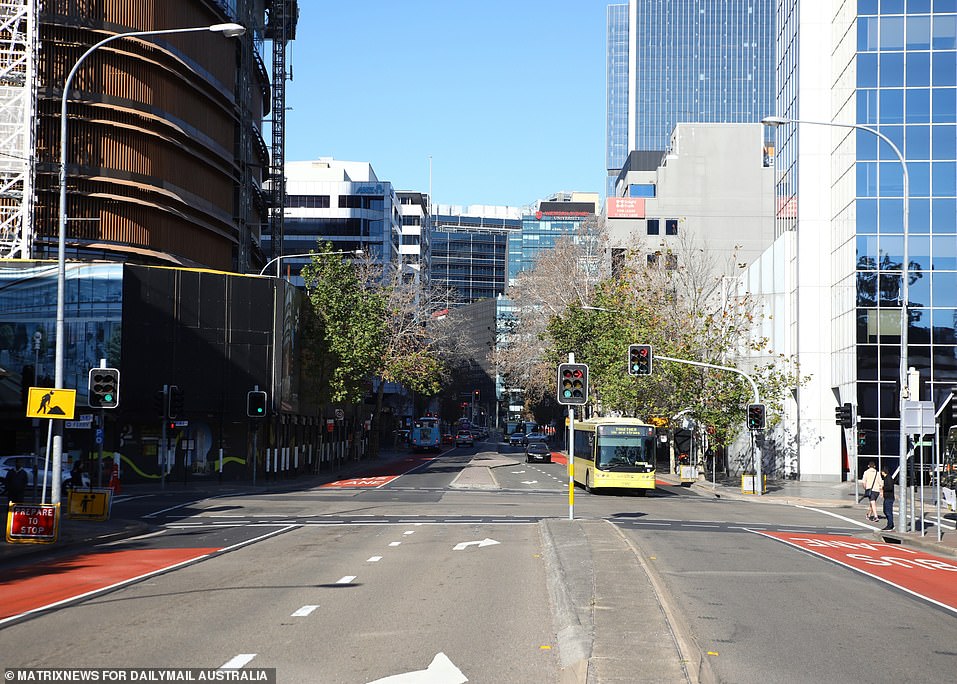 While The Collector Tavern remains, the previous tall buildings have been swamped by high-rises – with more currently under construction 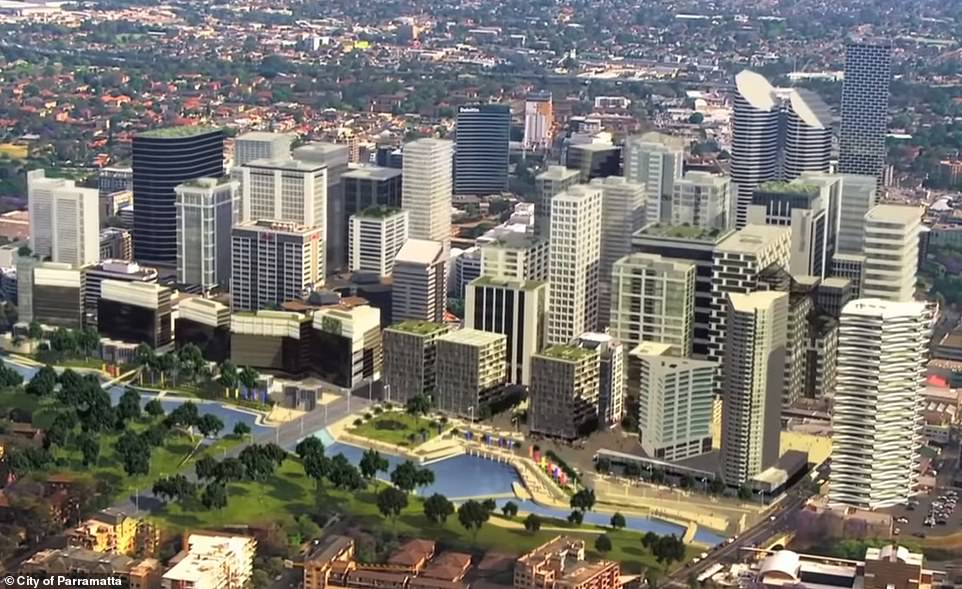 A glimpse into the future: An artists impression of what the city of Parramatta could look like once the high-rise projects are complete

Parramatta is unrecognisable to what it was even 25 years ago, with enormous residential buildings and the offices of business giants like the NAB bank now located in the CBD.

It is all part of the plan to turn it into the city of Sydney’s west, with 260,000 extra jobs forecast by 2048 and a boom in population forecast.

Adding to the need for growth in the area is its distance from Sydney’s CBD – 24 kilometres – and the fact that up to half the entire population of greater Sydney will live in the western suburbs within 25 years.

Iconic former Paramatta Eels star and long-time business owner Peter Wynn recalls a time when you could easily drive through the now bustling CBD like it was a country town.

‘Parramatta signed me at the end of 1978, I can remember all the buildings on either side, all the shops, there was no mall – it was just like any other suburb,’ Wynn, 62, said.

‘Probably what I didn’t realise back then was how easy it was. If you wanted to go to the shops you would just drive down Church St and pull up on the street, I remember it so clearly it is as though it was yesterday.

‘It just had all the characteristics of a typical big country town. There was a pub on the corner and the shops along the main street, so being from regional NSW I could relate to that and so I felt quite comfortable.

‘What hits me the most now is the skyline of Parramatta. Starting at the river where David Jones used to be there is the Meriton apartments and then as you move further south you’ve got apartments going up, you’ve got high rises everywhere.

‘There’s also huge multiculturalism in Parramatta now which I didn’t notice initially, but since maybe the mid-1990s you could really see the change in dynamic. It’s just a great place now.’ 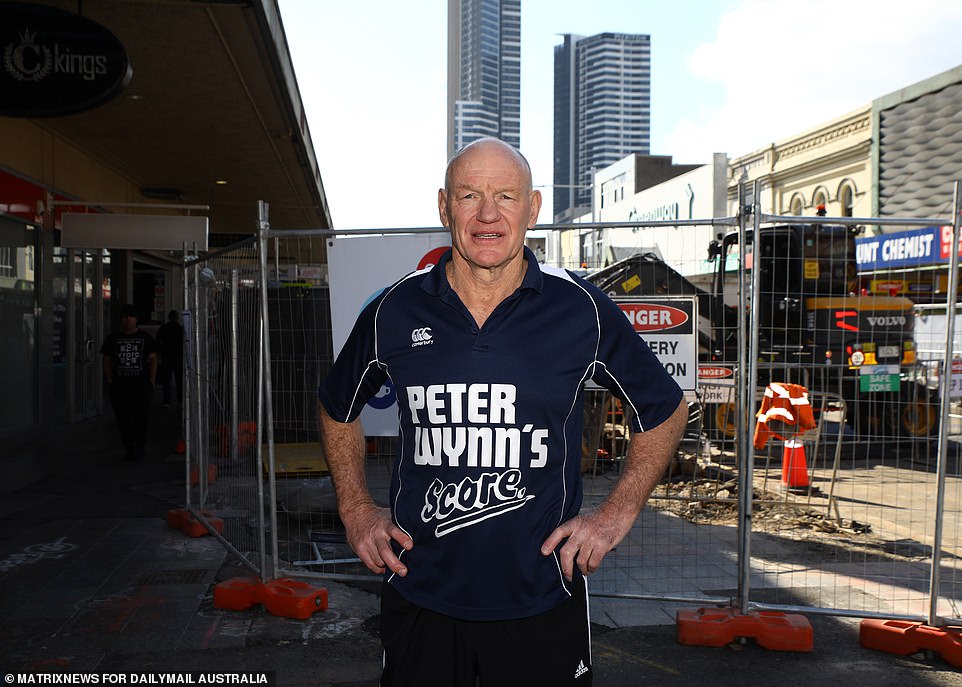 Iconic former Paramatta Eels star and long-time business owner Peter Wynn (pictured) recalls a time when you could easily drive into the now bustling CBD like it was a small town – today the city is filling up with high-rises, as can be seen behind him 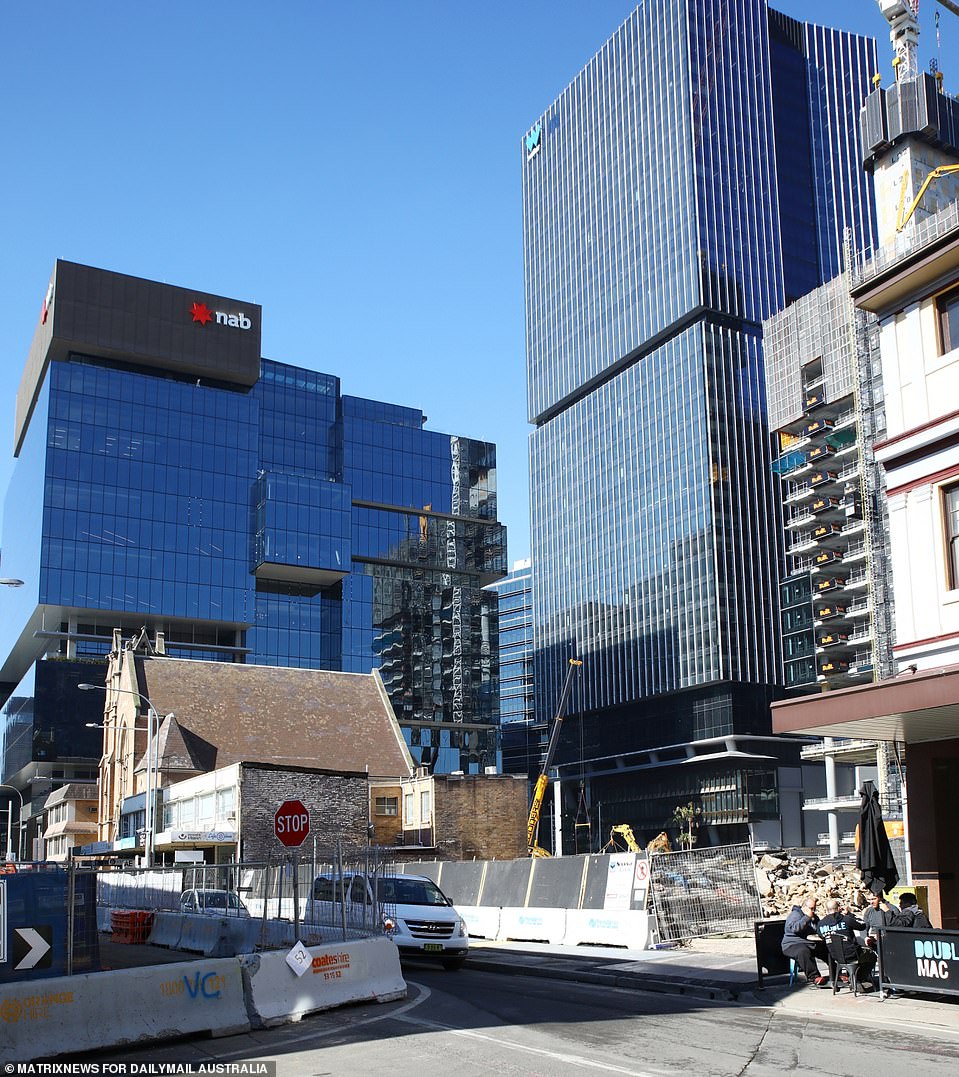 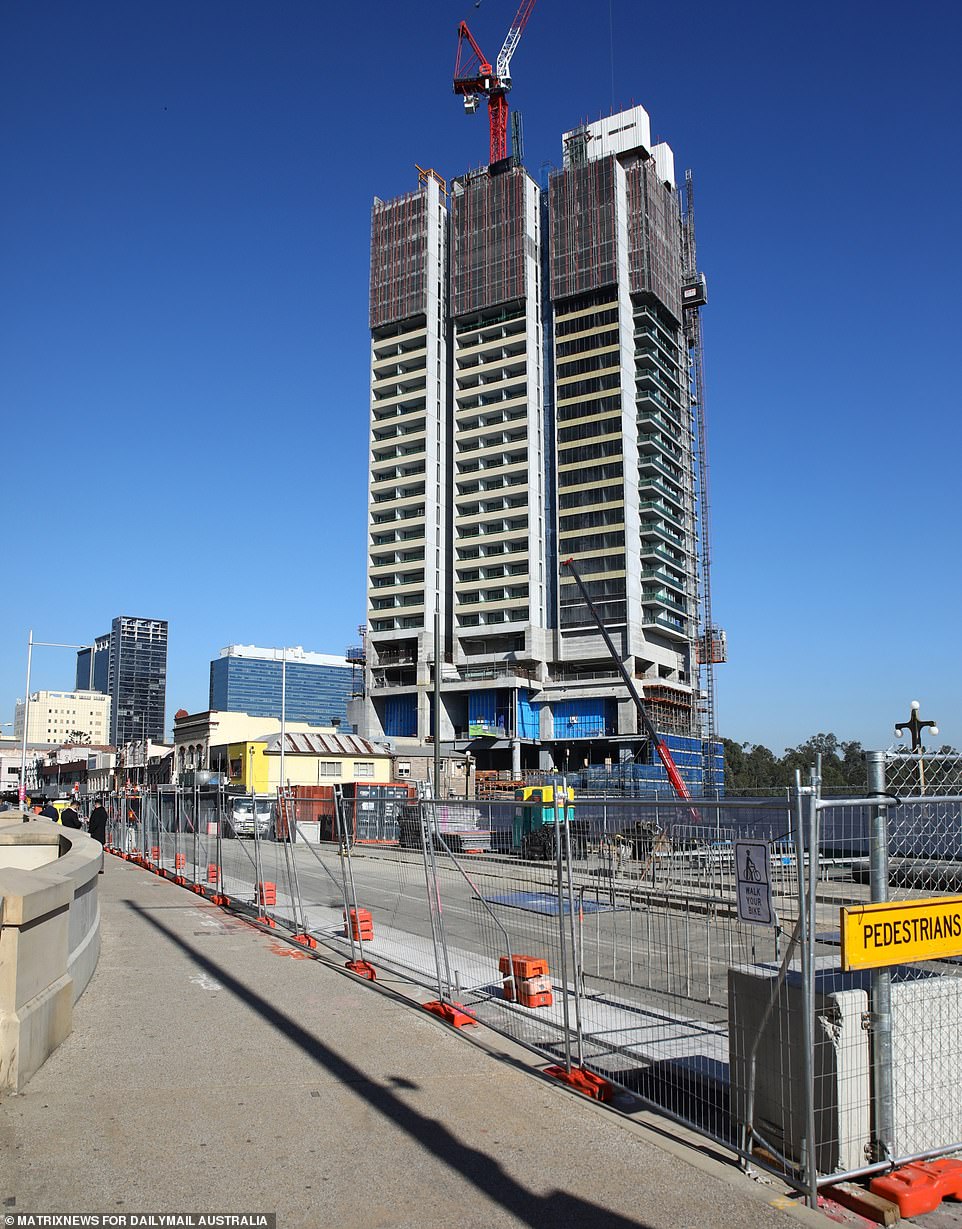 Cranes sit atop another one of the numerous massive buildings under construction in Parramatta, while workers prepare for the lightrail which is expected to open by 2023 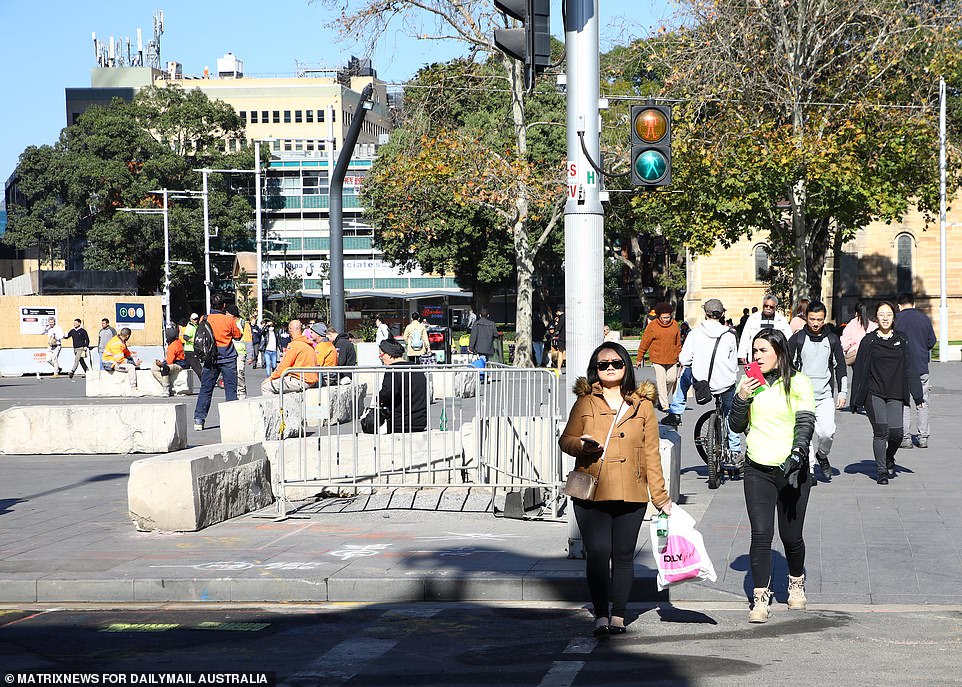 Today, more than 65 percent of Parramatta’s population were born overseas and some 140 different languages are spoken in the area 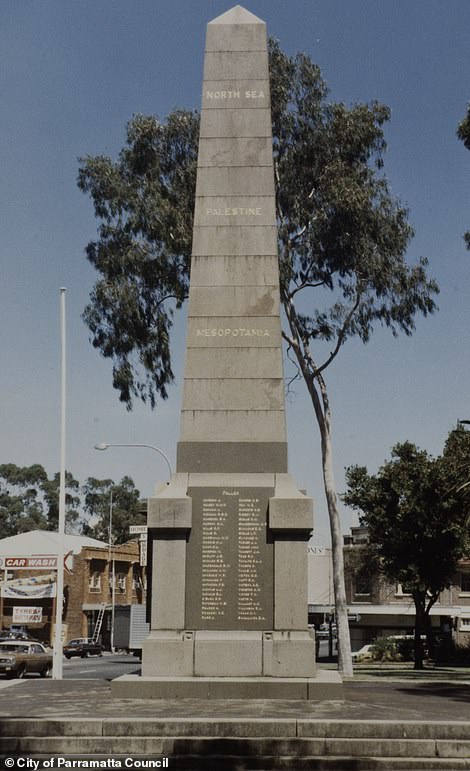 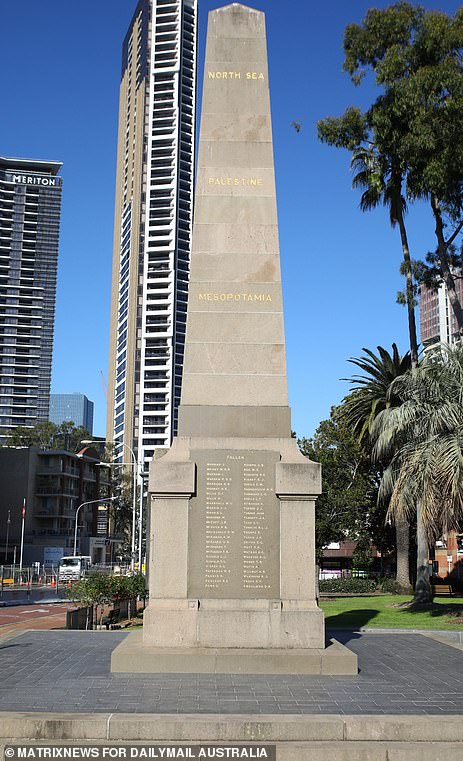 In the background of a 1980s photograph of the Parramatta cenotaph the blue sky is uninterrupted, with only a car wash and double storey buildings in the background. At the same spot today, the memorial is dwarfed by two enormous Meriton towers 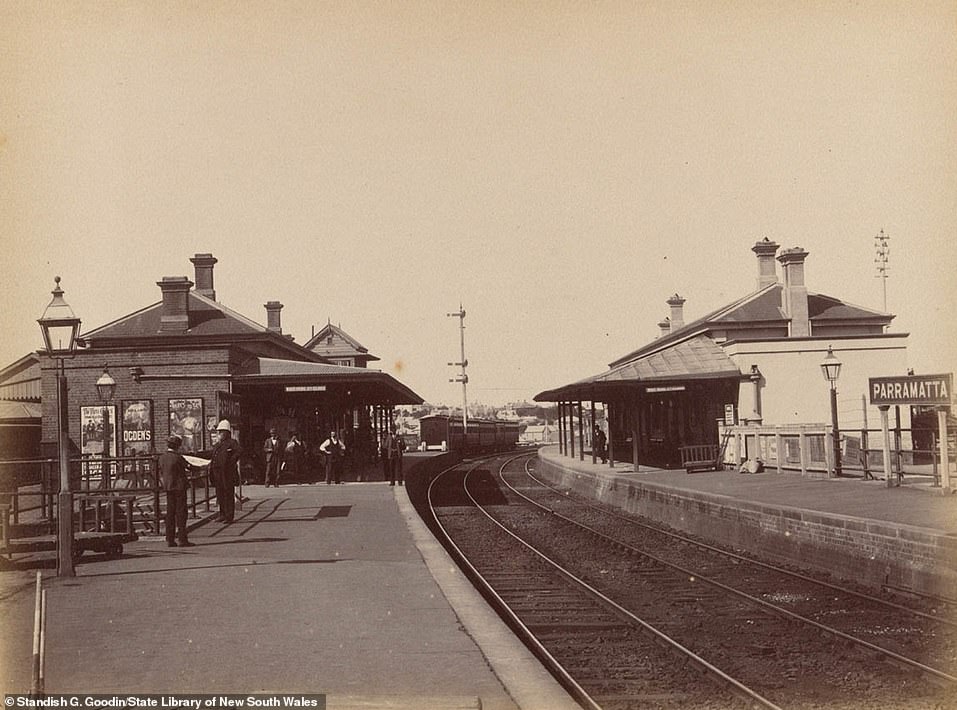 Back in 1898 the Parramatta train station was hardly the bustling three storey complex that ferries thousands of people to and from work, as it does today 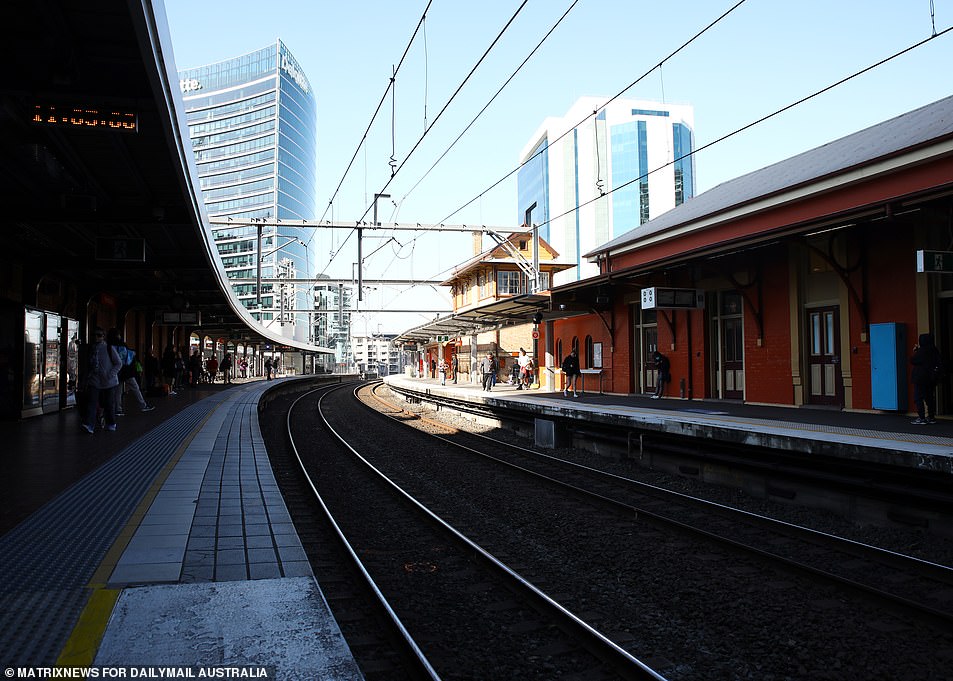 While some old buildings remain, overlooking the modern station is the high-rise office complex of accounting firm Deloitte

Centenary square at the heart of the CBD was initially trodden by horse and buggies, before cars took over.

Today, gone is the Murrays Limited department store and in its place sit cafes, bakeries and a hairdresser’s salon, while office and construction workers regularly gather to eat in the sun.

While the old clock remains in place, it is now dwarfed by enormous buildings which block out the sun for large parts of the day.

A chemist once stood alone on nearby Macquarie Street, but now in its place sit a hub of shops, restaurants and small office spaces.

In the background of a 1980s photograph of the Parramatta cenotaph the clue sky is uninterrupted, with only a car wash and double storey buildings in the background.

At the same spot today, the memorial is dwarfed by two enormous Meriton towers.

Up the road at the Woolpack Hotel – which was founded in 1796 – the difference to the early 1930s is remarkable.

It once sat alone on the corner but is now surrounded by businesses, while behind it enormous office blocks reach high into the sky. 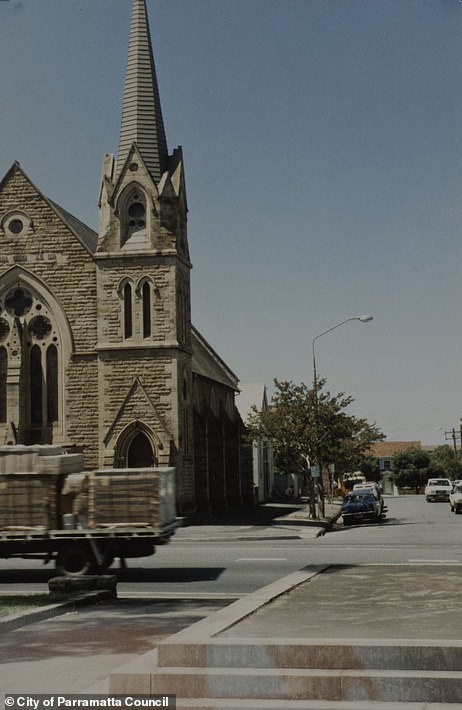 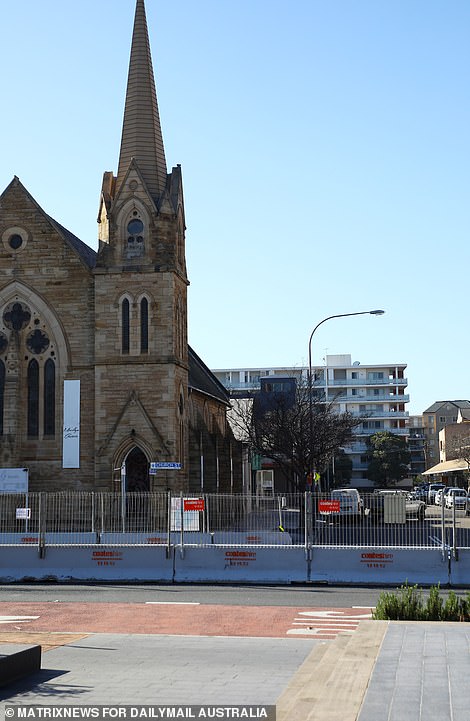 A new residential building in the background is one of the only differences at this site on Church Street, but that may change soon 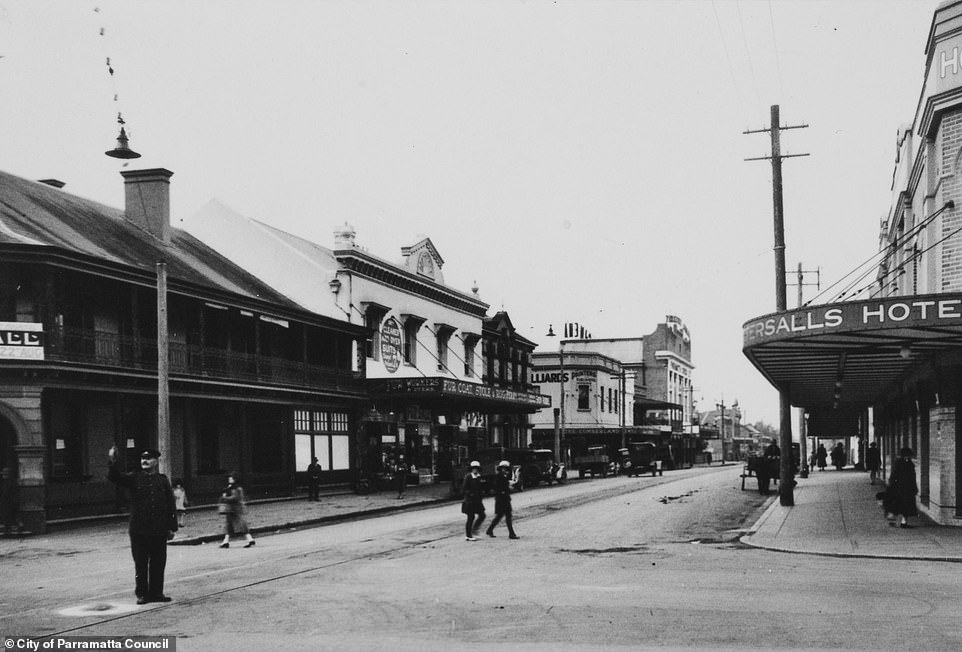 A policeman controls traffic along Church Street – the main street of Parramatta – in the early 1930s, with a number of pubs and old buildings able to be seen 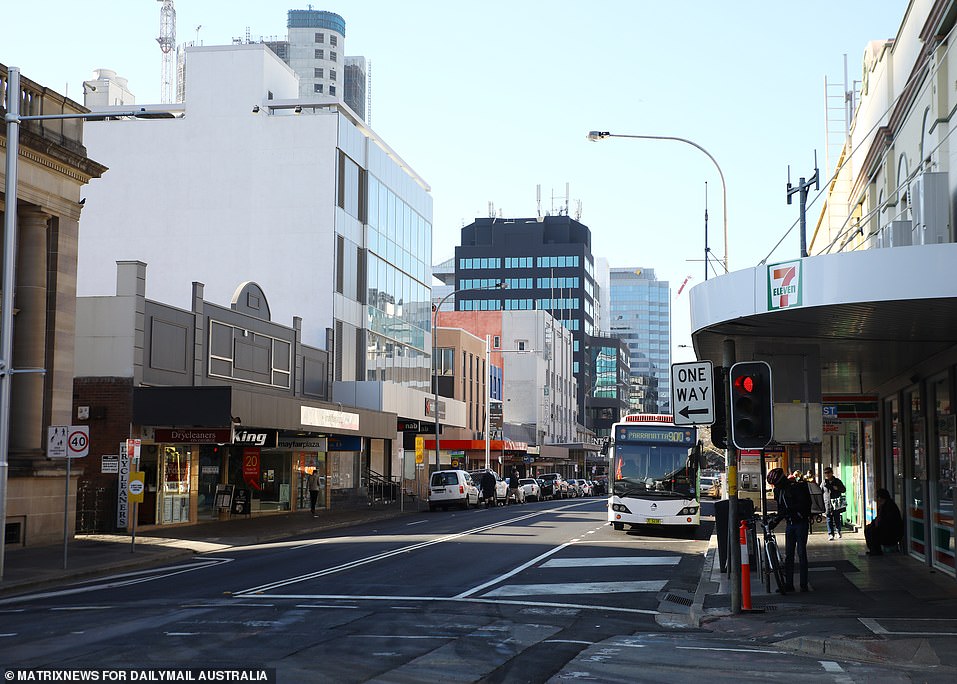 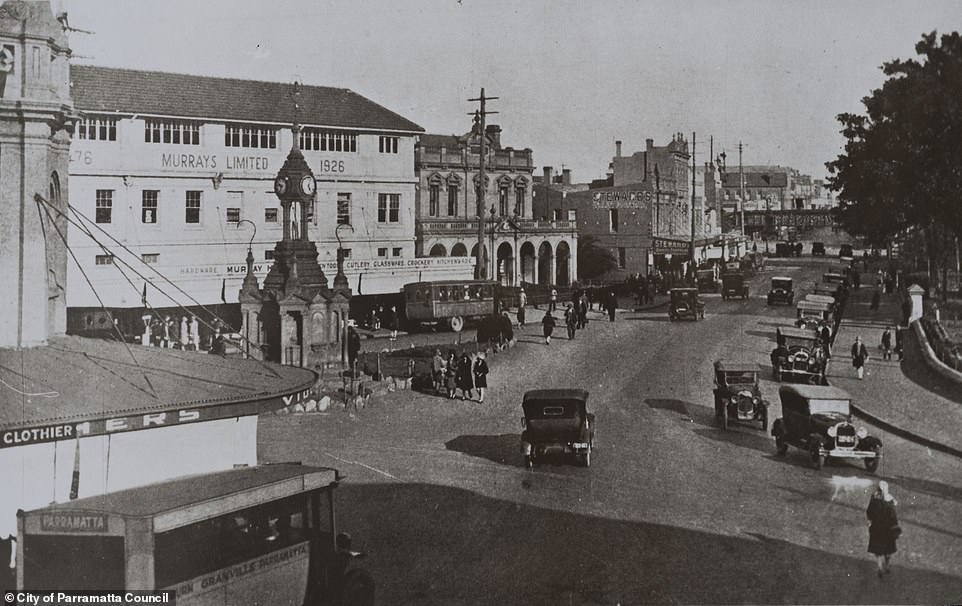 This dirt road at the heart of Parramatta was home to cars and businesses in the 1930s, but today is best known as Centenary Square 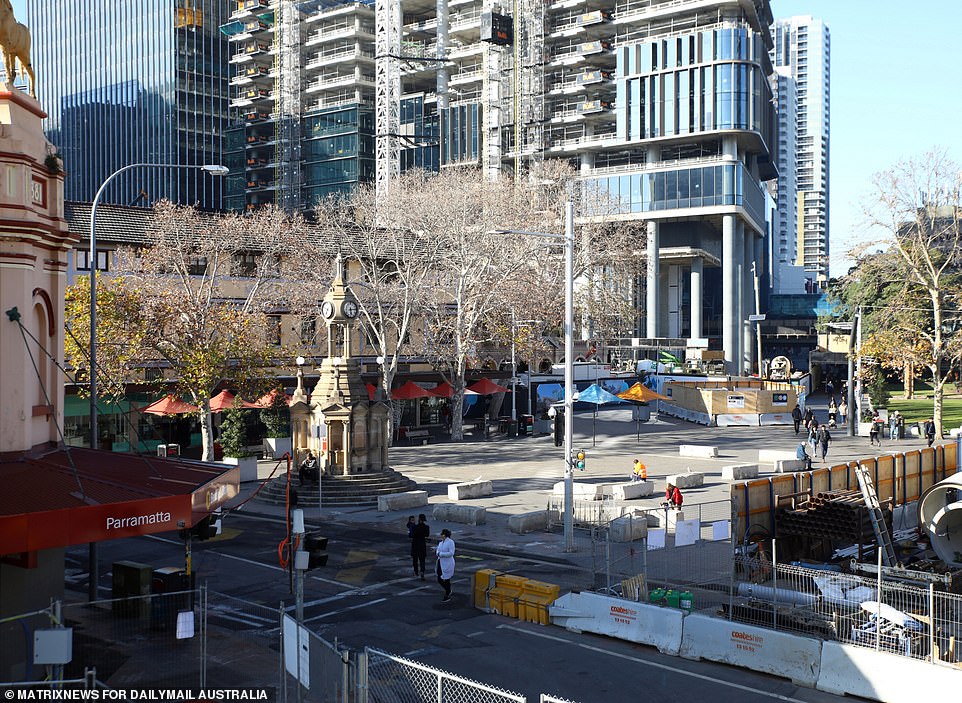 While the clock and several buildings remain almost one century on, today the area is free from traffic and will soon be cast into shadow by even more high-rise towers

University of Sydney urban design expert Tooran Alizadeh is a major supporter of the move to turn Parramatta into a bustling metropolis.

She believes that after decades of being forgotten, a boost in its infrastructure with light rail and a monorail on the way will only aid in the CBD’s growth.

‘Parramatta is one of the most excitement planning projects in Australia, because what is happening there is really a once in a lifetime opportunity,’ Ms Alizadeh said.

‘The plan is for Parramatta to be the next CBD of greater Sydney metropolitan region and that plan just shows the very, very long way that Parramatta has come.’