House Speaker Nancy Pelosi said Friday that Confederate statues on Capitol Hill are the ones that need to go – not depictions of slave-owning founding fathers like George Washington and Thomas Jefferson.

‘I do believe that if people have committed treason against the United States of America their statues should not be in the Capitol,’ she told reporters at a press conference.

She also suggested President Trump was spending too much time ‘preserving the relics of the Confederacy.’ 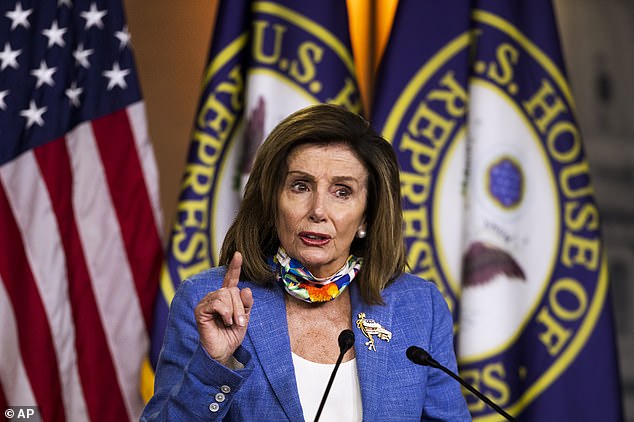 House Speaker Nancy Pelosi said statues of people who ‘committed treason’ – meaning Confederates in the Civil War – have no place on Capitol Hil, but drew a distinction between them and slave-owning founding fathers like George Washington and Thomas Jefferson 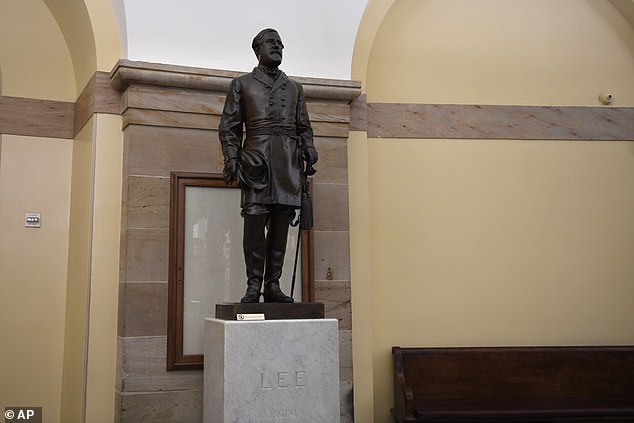 Pelosi said there was legislation coming to remove the remaining 11 Confederate statues, though she doesn’t have Senate GOP support. She also reminded reporters at her press conference she can move statues, like Robert E. Lee (pictured) who is on display in the Crypt 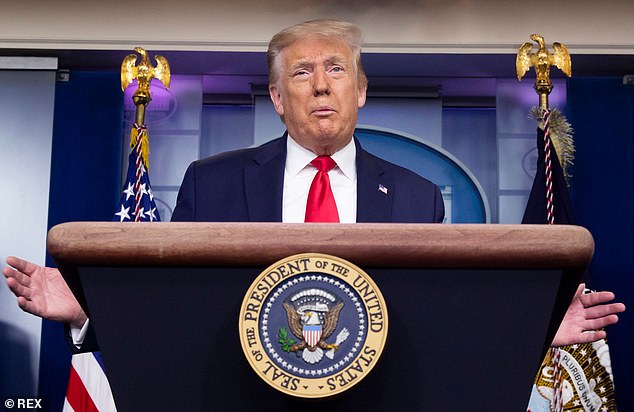 Pelosi also blasted President Trump, photographed during his brief appearance in the White House briefing room Friday, for spending too much time ‘preserving the relics of the Confederacy’

Pelosi had been asked to give an update on her quest to get 11 statues removed from the Capitol complex.

She had originally announced her intentions on June 11 shortly after Trump tweeted – and then had his press secretary pass out a statement and read it aloud – that said he ‘will not even consider’ renaming military bases that still bear the name of Confederate fighters.

Earlier this week, Trump stood his ground, threatening to veto the massive defense spending bill that contains the provision.

McConnell said the decision should be left up to the states, which get to decide what two figures are included in the Capitol’s Statuary Hall collection.

In the meantime, Pelosi got the paintings of four former House speakers who served the Confederacy removed from the Speakers Lobby to mark the Juneteenth holiday.

‘And there will be legislation coming forth to remove those same people who meet that low description,’ she said of those who ‘committed treason.’

While a bill has been pitched in the House, she’d still need it to pass the Senate and be signed by Trump to take any action.

Pelosi also reminded journalists that she had the power to move the Confederate statues. She famously stuck the statue of Confederate Gen. Robert E. Lee in the Crypt the first time she served as House speaker.

A reporter asked Pelosi if she drew the same distinction as Joe Biden, the Democrats’ presumptive nominee, who was asked about the issue at his Tuesday press conference in Delaware.

‘The idea of comparing whether or not George Washington owned slaves or Thomas Jefferson owned slaves, and somebody who was in rebellion committing treason trying to take down a union to keep slavery, I think there’s a distinction there,’ Biden had said.

‘If you’ve committed treason against the United States of America,’ she said. ‘It’s not about Washington or Jefferson.’

‘And that’s the clarity we should have,’ she added.

One of the arguments coming from the White House podium is that removing Confedrate monuments will lead to a slippery slope of taking down memorials for George Washington and Thomas Jefferson too.