Ryanair jet carrying 172 people from Stansted was seconds from smashing into the ground near Bergerac airport in southwestern France, report reveals

By Darren Boyle for MailOnline

A Ryanair flight approaching Bergerac airport in poor weather conditions flew too low for more than two minutes and was ordered to ‘pull up’ by an automated safety system.

The jet, which was travelling between London Stansted and Bergerac, France triggered several altitude warnings on its approach to the airport – which included the critical ‘pull up’ instruction when the jet was just 842 feet above the ground while it was eight miles from the runway.

Shortly before the ‘pull up’ alert sounded, the crew received a ‘terrain’ warning which warned them that they were flying too low. 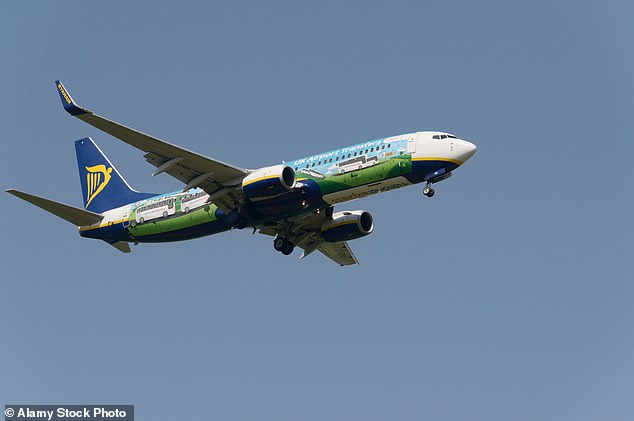 The Ryanair Boeing 737-800, pictured, was on approach to Bergerac airport in south west France in January 2015 when a vital safety system ordered the pilots to ‘pull up’ as they were flying too low 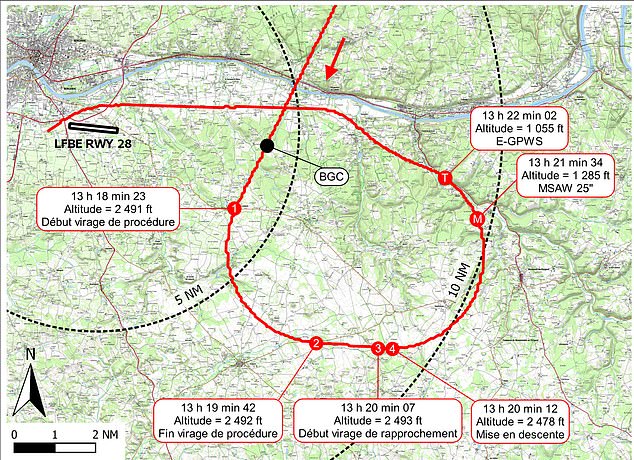 An investigation by the French air safety regulator BEA showed the aircraft’s course during the aborted approach to Bergerac airport. It showed the jet was flying at 2,491 feet as it began its turn away from the runway, but dropped to 1,055ft – which was less than 850ft above the ground, while it was still eight miles from the runway 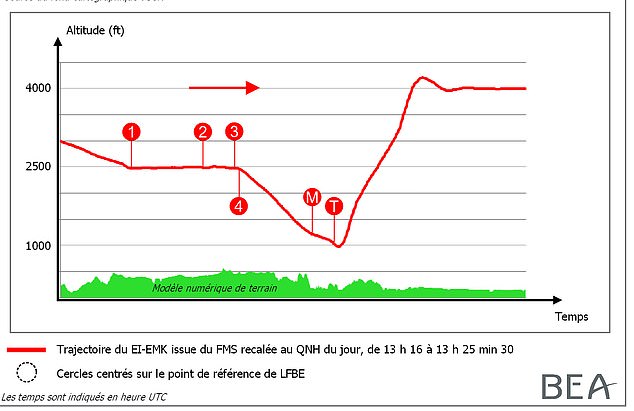 Investigators found the aircraft dropped below the minimum safe altitude and was forced to abort its landing attempt and return to 4,000 feet

At the time, the first officer, who was flying the aircraft, was conducting a turn in heavy cloud and did not have ‘any visual references’.

The 27-year-old first officer was flying a ‘non-precision approach’ although the crew had elected to use an automated system to regulate their aircraft’s descent.

The first officer, who had just 400 hours experience, had never flown a non-precision approach – which allows the pilot to follow a pre-determined course down to a minimum altitude. Pilots are not allowed to go below this minimum altitude unless they are able to see the runway.

The 57-year-old captain was unaware that his colleague had never flown a non-precision approach.

An investigation by the French aviation regulator BEA found it is likely the first officer and the captain had lost situational awareness during the approach.

The investigators found that the preparation for the landing attempt was ‘insufficiently precise and complete’.

It said the captain should have told his first officer to use the more accurate satellite navigation equipment during the approach.

Due to the conditions, the BEA discovered the pilots were forced to change the landing mode in the flight management computer just as they began their approach.

This change led to a misunderstanding between the co-pilot and the captain about which mode was to be used.

Once the pull up warning sounded, the crew aborted their approach and increased altitude to 4,000 feet before landing safely some 20 minutes later.

Without corrective action, the aircraft would have hit the ground several miles short of the runway within 40 seconds.

According to the BEA, some of the airport’s navigational aides, which assist pilots in poor weather conditions were not operational that day.

The report claimed as a result of the reliance on technology ‘pilots may no longer be sufficiently trained to carry out non-precision approaches using only conventional equipment and instruments’.

Type 2 diabetes symptoms: The sign after eating that could signal you have the condition

Check Also
Close
Featured Posts
Is Gary Lineker's playboy brother the most deluded dater on the web?
5 mins ago