Violent protests and civil unrest continue to sweep the US with police clashing with demonstrators in Virginia as riots broke out once again in Portland and Seattle.

At least six people were arrested in Richmond on Friday night after protesters faced off with cops, pelting them with paintballs and other ‘hard objects’, police said.

Chaos broke out near the Robert E. Lee statue where a crowd of 75 to 100 people had gathered and remained by 10pm – despite grounds closing at sunset.

One officer required hospital treatment after he was struck in the back of the helmet with a hard object, authorities said. 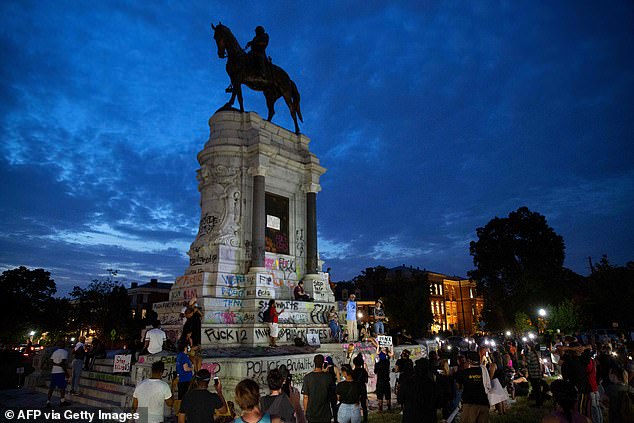 Chaos broke out near the Robert E. Lee statue on Friday where a crowd of 75 to 100 people had gathered and remained by 10pm – despite grounds closing at sunset. Pictured: Crowds gather around the defaced monument earlier this month 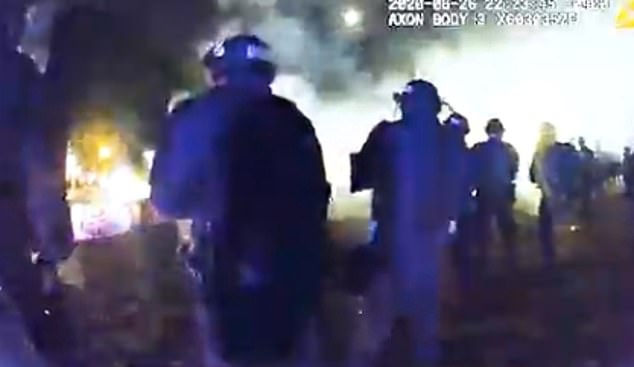 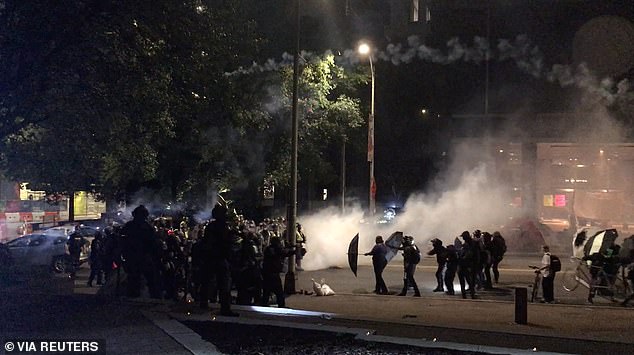 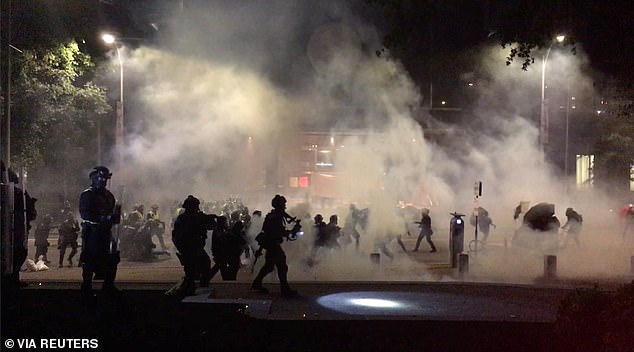 The RPD said they did not use tear gas on demonstrators but one officer discharged pepper spray at one point ‘due to ongoing assaults from the crowds.’

Five adults and one minor were arrested in the confrontation. Their charges range from unlawful assembly, obstruction of justice, trespassing and assaulting a law enforcement officer.

Shortly after the area was cleared out at 11.30, protesters allegedly began shooting fireworks ‘at police’, VA State Police said.

The department released body cam footage that showed the explosives being launched.

‘At least one of the protester’s pyrotechnics spun out of control & struck an individual in the media,’ state police said in a statement.

The memorial has become a site of recent clashes and unrest as protesters call for the removal of Confederate statues, obelisks and other monuments across the country. 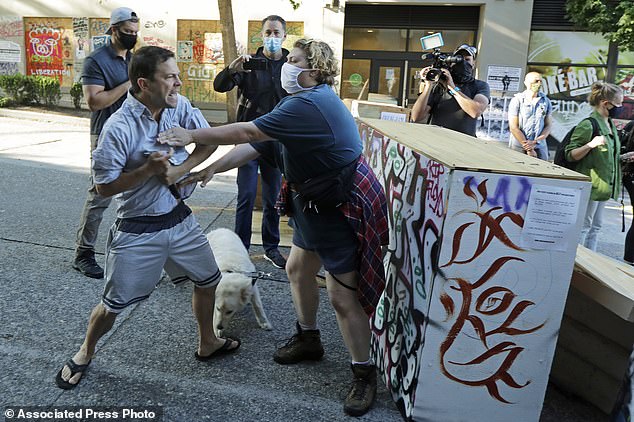 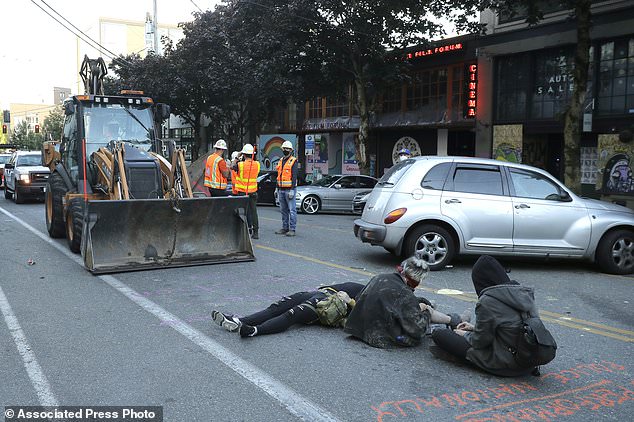 The 12-ton, 21-foot statue of Lee is especially symbolic in Richmond, the former capitol of the Confederacy.

Friday’s skirmish comes amid weeks of demonstrations across the US, triggered by the death of George Floyd on May 25.

In the west coast, protests have escalated into riots in Seattle and Portland where police precincts have come under siege.

Seattle officials have come under mounting pressure to regain control of the city where protesters established a ‘police-free’ Capitol Hill Autonomous Zone (CHAZ). 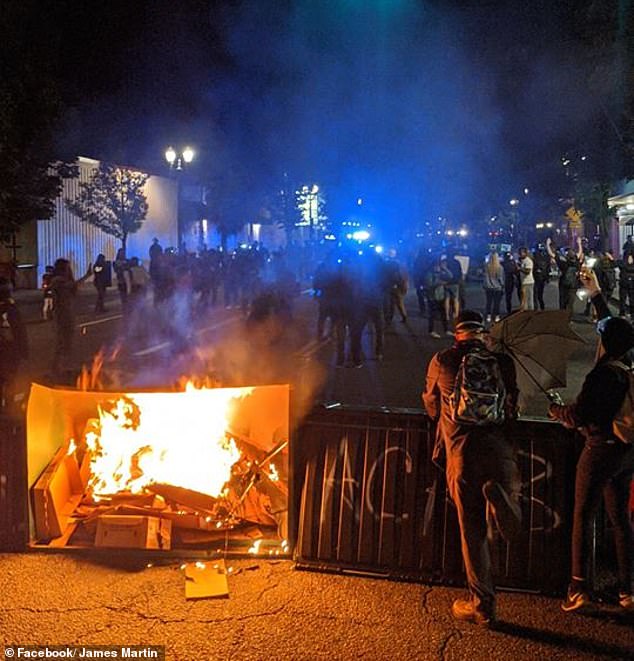 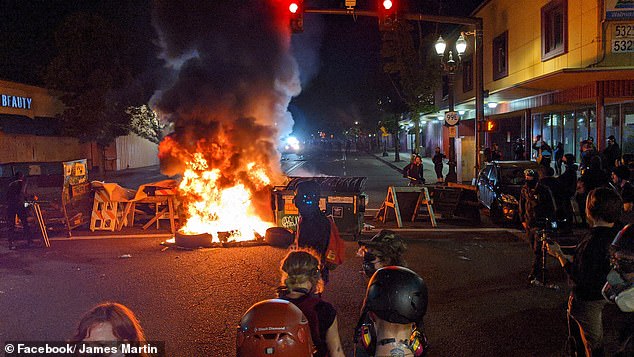 On Friday, group of rioters were seen hurling rocks at Seattle’s West Precinct, smashing one of the windows, KOMO-TV reported.

Protests carried on into the night in Portland after Portland Police Bureau’s North Precinct was set on fire earlier that morning.

Seattle Mayor Jenny Durkan met with demonstrators Friday after some lay in the street or sat on barricades to thwart the city’s effort to dismantle an ‘occupied’ protest zone that has drawn scorn from President Trump and a lawsuit from nearby businesses.

Crews arrived with heavy equipment early Friday morning at the Capitol Hill Occupied Protest, an occupied protest zone in Seattle, ready to dismantle barriers set up after protesters seized the area June 8 following clashes with police. But by mid-morning, they appeared to have backed off rather than risk conflict.

A spokesperson said late Friday the mayor met with Black ministers and some of the organizers and suggested ‘steps that she believes can be taken in the coming days, including the removal of the barriers to create more access.’

Seattle police had no plans to return this weekend to a nearby precinct that was abandoned following clashes with demonstrators, Durkan’s spokesperson said.

Matt Baker: Countryfile star warns ‘don’t try this at home’ as he shocks with risky move

Should I give my child the flu vaccine?
7 mins ago

Should I give my child the flu vaccine?