A Missouri lawyer who was criticized after he and his wife brandished guns as protesters walked into their private St. Louis estate has said his family was scared ‘the mob’ would ‘come into the house, kill us, burn the house down’.

Mark McCloskey, 63, has spoken out in his defense claiming it is ‘ridiculous’ to call him a racist for his actions as he had spent his career ‘defending people that are defenseless’ and those that ‘need a voice’.

McCloskey joined Tucker Carlson on Fox News on Tuesday night stating ‘my black clients love us’ and and that he and his wife Patricia McCloskey, 61, did what ‘I thought I had to do to protect my hearth, my home and my family’.

He also appeared on CNN’s Chris Cuomo, claiming that what he faced was ‘terrorism’.

It came a day after St. Louis Circuit Attorney Kimberly Gardner, the country’s lead prosecutor, said she was investigating whether charges should be brought against the lawyer couple. 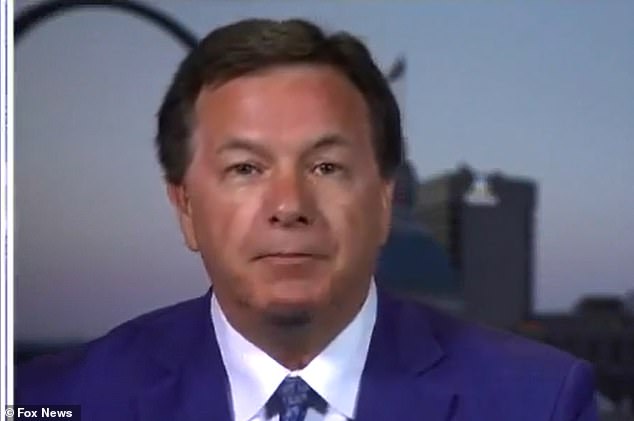 Mark McCloskey, 63, appeared on Fox New on Tuesday to defend his actions 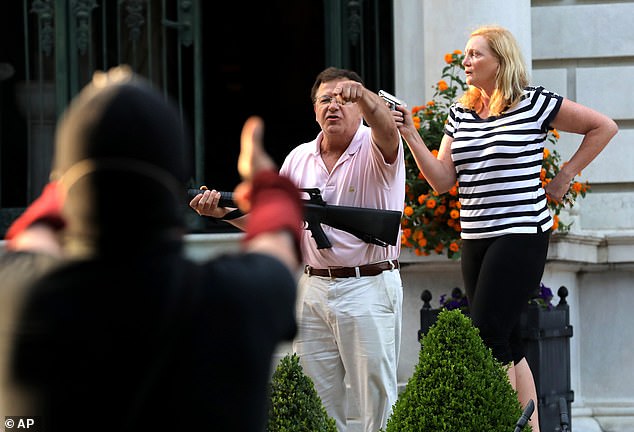 ‘My wife and I were preparing to have dinner, maybe 70 feet from the gate,’ Mark McCloskey told Carlson.

‘By the time we looked up and we saw the marchers coming down Kings Highway and getting loud, we looked over the gate and there’s no police there. Our private security wasn’t there. Nobody’s there.

‘They are angry, they’re screaming, they’ve got spittle coming out of their mouth they’re coming toward the house.’

McCloskey continued that after watching a 7/11 be burned down with no intervention in a protest in the city on June 22, he felt that he and his wife had to act and they went into the home to grab a handgun and an AR-15.

‘I turned to my wife and I said, “Oh my God, we’re absolutely alone. There is nobody here to protect us”,’ he told Fox.

‘When I saw that mob coming through the gate with their rage and their anger, I thought that we would be overrun in a second,’ he said.

‘By the time I was out there with my rifle, the people were 20 or 30 feet from my front wall. I’ve got a little wall that separates the house from my front yard. I was literally afraid that within seconds they would surmount the wall and come into the house, kill us, burn the house down and everything that I had worked for and struggled for the last 32 years.’

‘I saw it all going up in flames and my life destroyed in an instant and I did what I thought I had to do to protect my hearth, my home and my family.’ 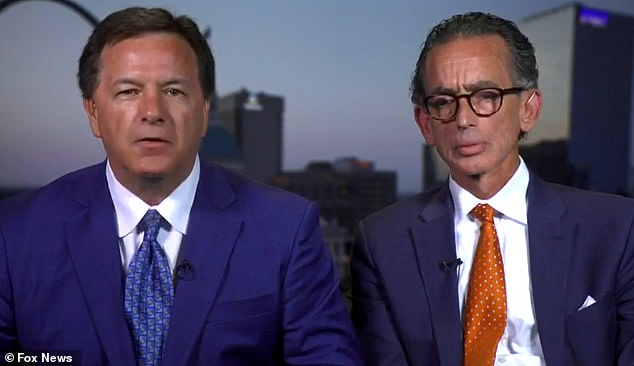 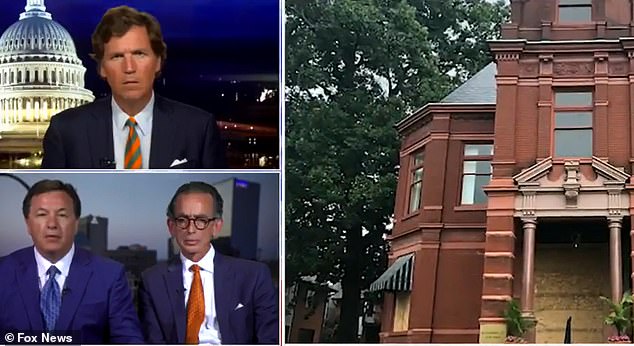 McCloskey claimed that his actions had nothing to do with race and that he didn’t care what race the protesters were.

‘Here’s the interesting thing, I spent my career defending people that are defenseless for people who are having a hard time making their oracle happen, for people that don’t have a voice,’ he continued.

‘To call us racist is ridiculous and it had nothing to do with race. I wasn’t worried what the race was [of] the mob that came through my gate, I was worried that I was going to be killed. I didn’t care what race they were.’

McCloskey also appeared on CNN told host Chris Cuomo that he was ‘protecting my wife, my home, my hearth, my livelihood’.

‘Chris, what’s the definition of terrorism? To use violence and intimidation to frighten the public. That’s what happened to me. That’s the damage I’ve suffered.’ 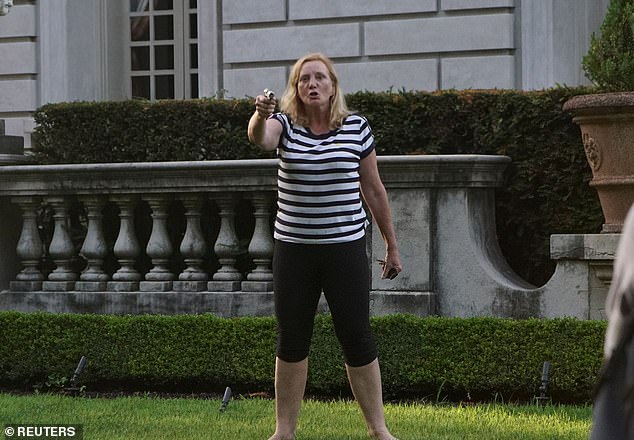 The couple were seen in multiple videos and photos on Sunday evening touting an AR-15 rifle and a handgun as protesters marched.

They were the only ones to lodge an official police report about the confrontation citing ‘threats of harm’ and police said Monday they would not be charged.

Yet St. Louis Circuit Attorney Kimberly Gardner announced Monday that she was working with police and prosecutors to investigate the lawyers for possible threats against the crowd.

The McCloskeys’ lawyer also appeared on Fox News Tuesday and said that his clients had not broken the lawyer with their actions and should not be charged.

‘Given the fact that we have a political animal in the circuit attorneys office, there is a risk,’ attorney Albert Watkins said of Gardner.

Garner has said that she was ‘alarmed’ by Sunday’s events where ‘peaceful protesters were met by guns and a violent assault’. 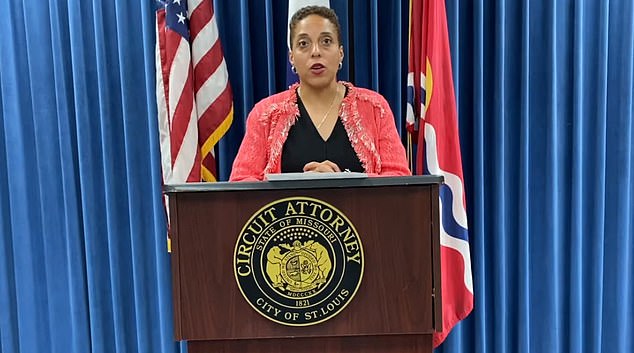 St. Louis Circuit Attorney Kimberly Gardner said she was ‘alarmed’ that ‘peaceful protesters were met by guns’ and that she is investigating the McCloskey couple despite police saying they were the only ones to file a report and there would be no charges against them

‘We must protect the right to peacefully protest, and any attempt to chill it through intimidation or threat of deadly force will not be tolerated,’ she insisted.

‘Since learning of these events over this weekend, I’ve worked with the public and the police to investigate these tragic events.

‘Make no mistake, the circuit attorney’s office we will not tolerate the use of force against those exercising their First Amendment rights, and will use the full power of Missouri law to hold people accountable,’ Gardner warned.

Video of the McCloskeys went viral after they were seen aiming the guns at demonstrators who walked by their palatial property in the wealthy Forest Park area at around 6pm on Sunday.

Protesters were en route to Mayor Lyda Krewson’s home to demand her resignation after she released the names and addresses of residents who had suggested defunding the police department.

The video of the couple’s standoff went viral with some supporting the pair’s right to protect their private property and others claiming that they broke the law by threatening a peaceful protest.

At one point, the pair seemed to be unknowingly pointing their weapons at one another other while trying to keep protesters away from their home – dubbed the Niemann Mansion.

In the video, demonstrators chanted ‘Let’s Go’ as the couple stood their ground at their front door, patrolling back and forth.

While the couple has had support for their actions they have also met with backlash. 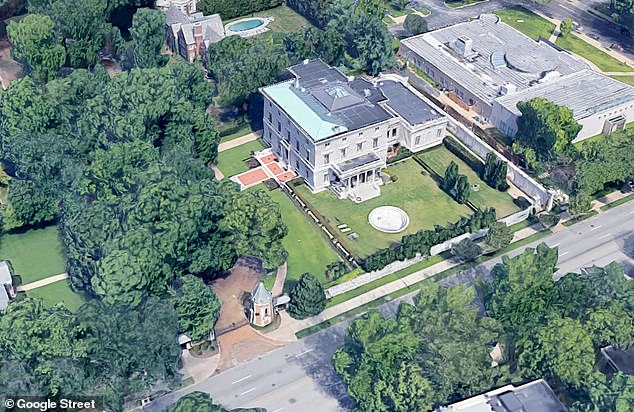 About 300 protesters had gone through a gate into this closed-off community and were marching in front of the McCloskey home, which is pictured center. The family said they were having dinner outside when the demonstrators arrived

The pair are both personal injury lawyers and run McCloskey Law Center from inside their extravagant home. The company’s website was taken offline on Monday afternoon because of the large influx of emails and the couple has said they have been forced to board up their office.

Police said Monday that people in the crowd yelled threats at the couple and that the McCloskeys would not be charged.

They added that they are still investigating but labeled it a case of trespassing and assault by intimidation against the couple by protesters in the racially diverse crowd.

According to the NRA, state law does not prohibit the open carrying of firearms, but does prohibit exhibiting ‘any weapon readily capable of lethal use’ in an angry or threatening manner in the presence of one or more persons.

Exhibiting a weapon in this way would likely be a Class D felony punishable by up to four years in prison and a fine not to exceed $5,000.

According to the St. Louis American, however, the ‘Castle Doctrine’ allows people to use deadly force to attack an intruder on their property.

Matt Baker pines to be back on The One Show in message to host Alex Jones: 'I miss that'

Retired vicar, 85, walks free from court after being cleared of sex attack on curate

Retired vicar, 85, walks free from court after being cleared of sex attack on curate
23 mins ago

Retired vicar, 85, walks free from court after being cleared of sex attack on curate