A store owner who was abused for ‘hoarding’ toilet paper which she was planning to sell to vulnerable members of the community has vowed to never help again after the ‘nightmare’ experience.

Celia Deng, 47, imported about 10,000 rolls from China to supply her two shops during the COVID-19 shortage.

She and her staff have been selling discounted loo rolls to people struggling to find any in store, even delivering free packets to her neighbours throughout the crisis.

But on June 16, tradesman Elie Abousleiman and two of his colleagues stumbled upon the mountain of 48-packs in a park in Macquarie Fields in Sydney’s south-west.

They immediately assumed she was one of the so called ‘hoarders’ who had stripped supermarket shelves bare and contributed to purchasing limits throughout Australia.

The men livestreamed themselves taking toilet paper from the pile and encouraged other people to come down and help themselves, leading to an onslaught of abuse from the public. ‘I’ll never do it again,’ Ms Deng told news.com.au after she received a tirade of backlash online.

‘The attitudes people [had towards] me, I’m very upset. I never, ever do it again – this would be my last time. I’m not touching toilet paper given all those attitudes, all what they said to me, I just couldn’t accept it.’

Ms Deng said some of the people targeting her made comments about her race but that she had chosen not to let herself get angry about it.

‘But they don’t know what is the story behind it.’ 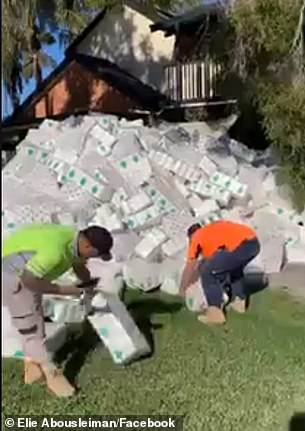 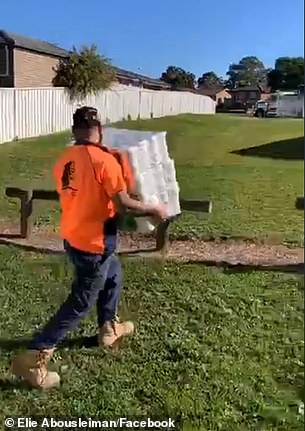 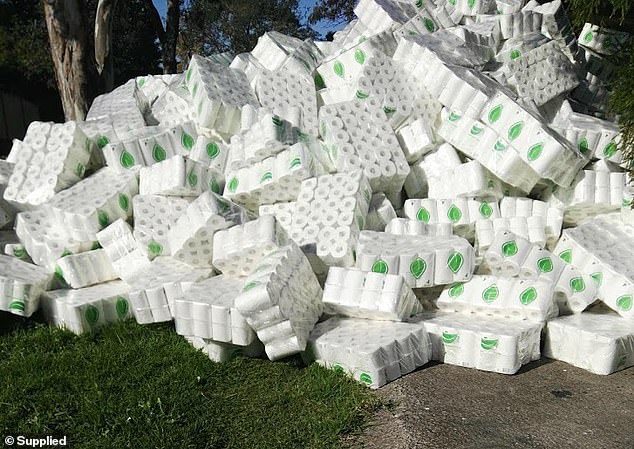 Pictured: The huge mountain of toilet paper lying on public land in the suburb next to Ms Deng’s home. She and her staff were in the process of moving the shipment into storage at her home 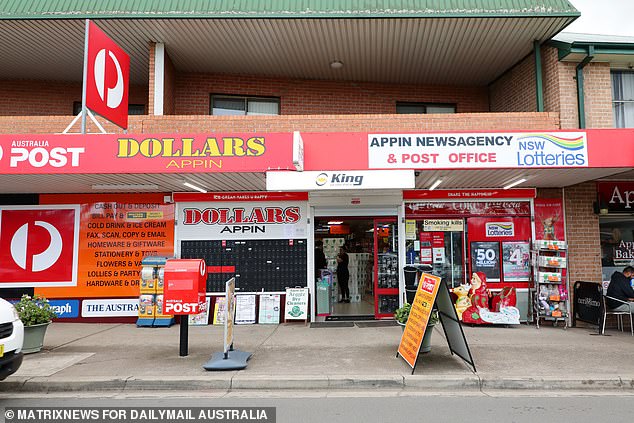 Pictured: The Appin newsagent Ms Deng operates as a franchisee. She said she is selling the toilet roll at a profit margin of only five per cent

She was inspired to begin importing it when she realised elderly and disadvantaged members of her community were missing out in supermarkets.

She said her profit margin on the product was as little as five per cent, but that she hadn’t minded up until this point because her customers ‘are lovely people’.

While a handful of people did arrive at her home and help themselves to the product, she said some came back and returned what they’d taken after the learned the truth of the matter.

‘I’m not angry at all because they are my local neighbours – they are lovely people,’ she told Daily Mail Australia.

‘They came to grab the toilet paper because they were told it was free.’

Ms Deng, who arrived in Australia 12 years ago as a skilled migrant, did not report the incident to the police. 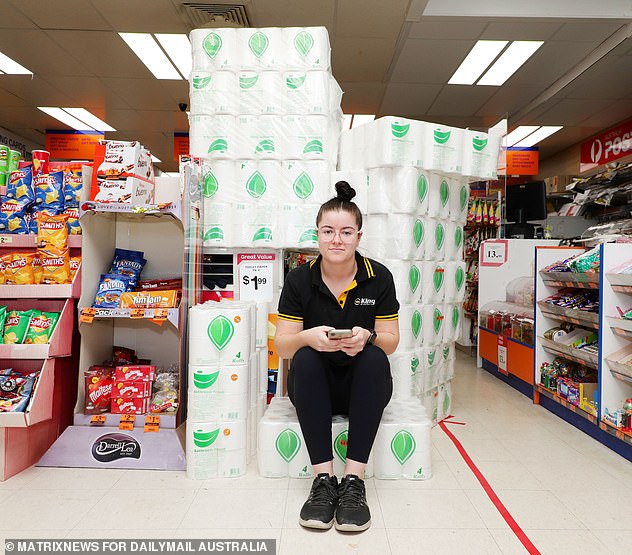 Pictured: One of Ms Deng’s shop assistants Roanna James with some of the toilet rolls imported from China by her manager. She said her boss had bought the large quantity of loo roll to help her community to get access to the product at a cheap price 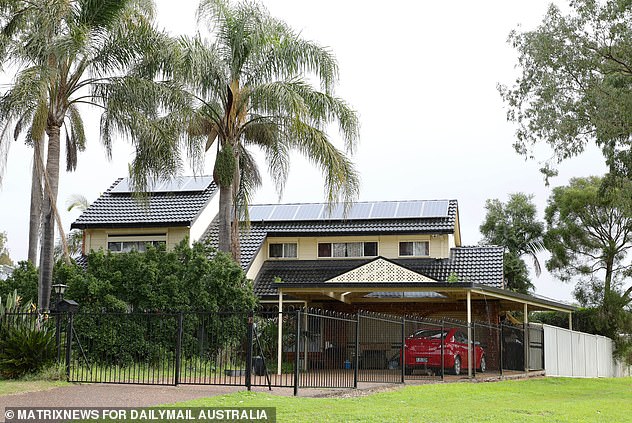 Both Mr Abousleiman and Ms Deng confirmed he started filming the altercation when she declined their offer to help move the shipment for $500.

Ms Deng claims he also called her a ‘stupid b*tch’.

One social media user said ‘her intentions sounded fair and genuine’ after learning Ms Deng had been stockpiling to sell to the local community.

‘So they offered to move it for her for $500 and when she declined they tried to sell them for $5 before ‘giving them out for free’ knowing they belonged to someone else,’ one person said.

‘She had a convenience store – shipped them from China and was barely making a profit from her selling price.’

‘She isn’t hoarding it so this guy is in the wrong,’ another said.

Others rallied behind the tradesmen though, with one saying if she did not want the product taken she should not have left it in a public area – even temporarily.

‘The toilet paper was in a park next to her home. This wasn’t on her private property,’ another commenter wrote.

‘If that was her house in the pictures why couldn’t she just put it on her property? Her property is big – there is a lot of space.’

Others rallied behind the tradesmen though, with one arguing she shouldn’t have left the haul in a public area

Mr Abousleiman told Daily Mail Australia he couldn’t believe his eyes when he found the huge mountain of toilet paper.

‘I was just so surprised to see it,’ he said. ‘If it’s her property then I suppose it’s her business but it was on public land for all to see. 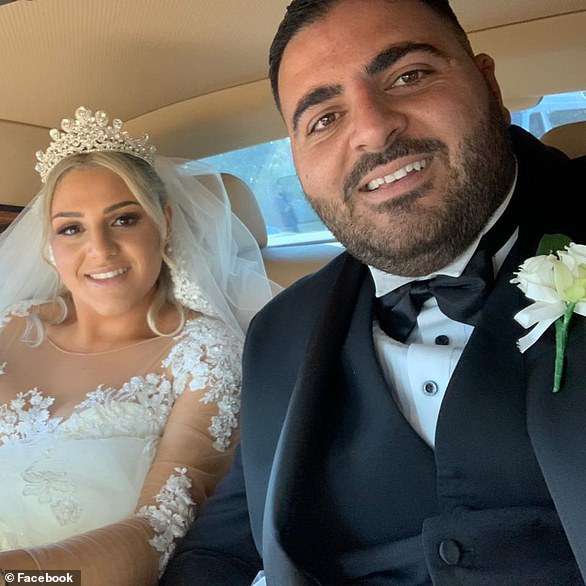 ‘I was going to put what I saw on Facebook Live anyway because everyone is fighting for toilet paper at the moment. I was speechless at such a mountain of toilet paper.’

The concreter said he also took exception to Ms Deng, whose supermarket staff had emptied a container into the park, using public land as a temporary storage space for the thousands of toilet rolls.

‘If it’s her property then fair enough but if it’s council land it’s another thing altogether,’ he said.

Death rate for men and women fell before coronavirus hit

A Question Of Sport: Alex Scott breaks her silence in message to her fans

A Question Of Sport: Alex Scott breaks her silence in message to her fans
12 mins ago

A Question Of Sport: Alex Scott breaks her silence in message to her fans