The heartbroken boyfriend of a woman who was shot dead in New York after a row over a girl groping her butt has revealed a video of their final moments together enjoying a night on a rooftop bar.

Andres Arias, 21, and his 19-year-old girlfriend Erica Lopez had been at a birthday celebration on a swanky rooftop bar in Manhattan’s Flatiron district on Thursday night.

Cellphone footage shows the pair laughing and joking with the Manhattan skyline behind them.

But the couple and their friends left the bar after midnight after an argument with a group of patrons after a girl allegedly groped Lopez.

They were then confronted by some of the group in the street before a car pulled up and a man opened fire, killing Lopez and injuring  Arias.

Arias told DailyMail.com exclusively that his girlfriend Erica Lopez may have saved his life by shoving him out of the way when the shooting started. 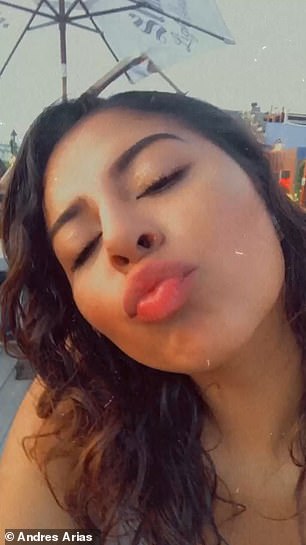 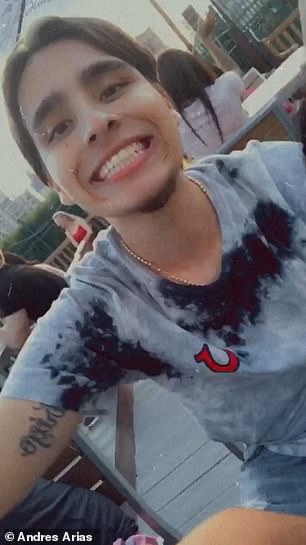 Cellphone footage shows Andres Arias, 21, and Erica Lopez, 19, laughing and joking, with the Manhattan skyline behind them, just hours before Lopez was shot dead 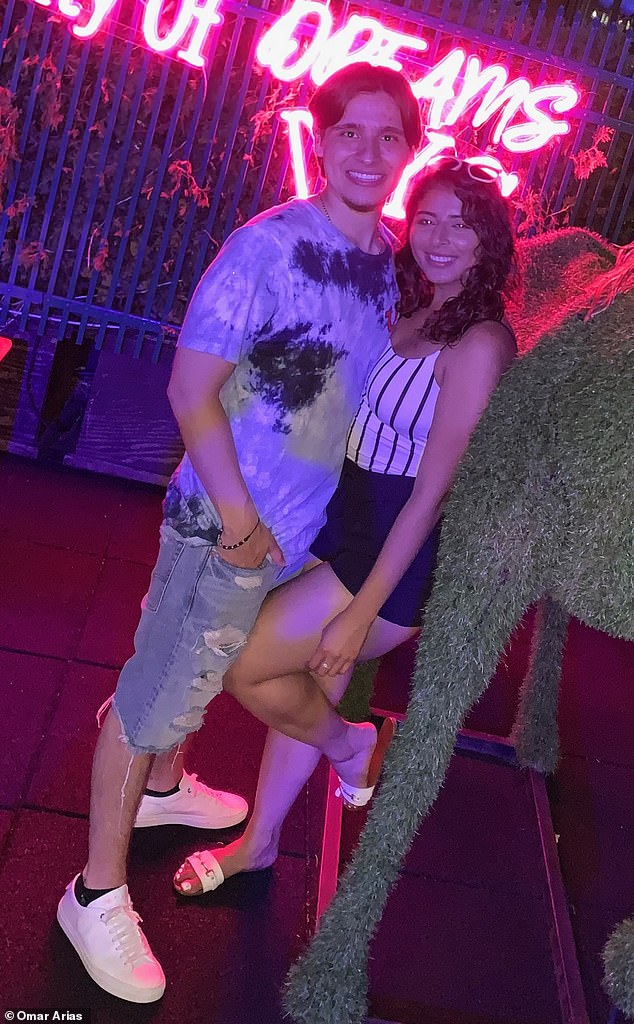 Andres  and Erica are pictured at 230 Fifth Rooftop hours before she was killed in a fatal double shooting on leaving the club Friday morning. The couple had been celebrating Arias’s cousin’s boyfriend’s birthday at the swanky rooftop bar in Manhattan’s Flatiron district before the night turned deadly

‘Erica pushed me out of the way, and one bullet went through her chest and grazed me through the left side of my ribs,’ he said.

‘I saw my girlfriend Erica falling to the ground, and I dove to grab her so she didn’t hit her head,’ he explained.

‘I turned her over, and she was bleeding through her left chest.’

Certified in CPR, Arias said he performed chest compressions to try and keep her alive before he then blacked out.

‘Once I came back to my senses, I saw EMTs putting Erica onto a stretcher and other EMTs putting me onto another stretcher,’ he said.

The couple were taken by ambulance to Bellevue Hospital and placed in the same room, separated by a curtain, where Lopez died a short time later.

Paying tribute to his girlfriend, Arias said: ‘She’s a spiritual amazing woman. She would always bring the good out of me and she would never fail to put a smile on my face.

‘Her energy would inspire you to get out of your confront zone. She was a sweetheart she was free and she was always love.’ 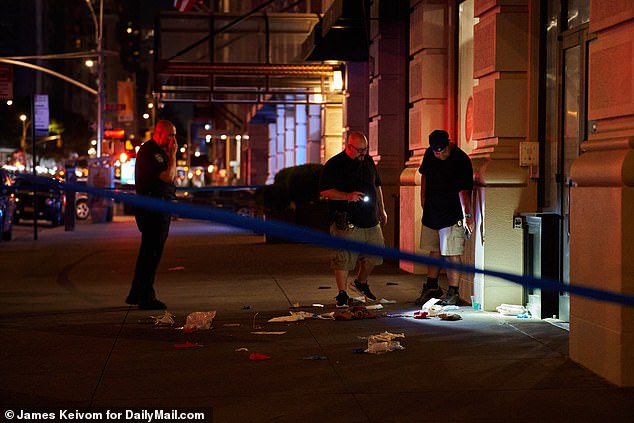 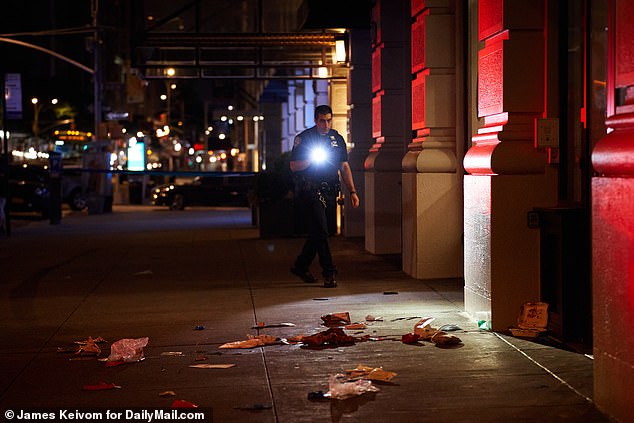 Arias spoke to DailyMail.com exclusively Friday and said the couple had been celebrating his cousin’s boyfriend’s birthday in Manhattan’s Flatiron district

The night started out as a celebration at 230 Fifth Rooftop, located near Madison Square Park at the corner of Fifth Avenue and 27th Street.

Arias, a student at Southern Connecticut State University, and Lopez, a hostess in a restaurant in a Norwalk mall, had taken a train into the city from their hometown in Norwalk, Connecticut Thursday afternoon.

In the city, they met up with about 10 people, including Arias’ cousin and the cousin’s boyfriend who was turning 27 years old.

At the bar, they struck up conversations with another group of about six young men and women.

‘They were complete strangers but we were all having conversations,’ Arias recalled.

‘We were all buying each other drinks and food. We were getting to know each other. It was a really good time.’

Then a woman in the other group grabbed Erica’s butt and also groped another one of their female friends, Arias said.

‘That girl in the other group started the whole incident,’ he said.

‘She was drunk. My girlfriend told me she was touching their butts, without their consent.’

Arias confronted the other group and an argument broke out. 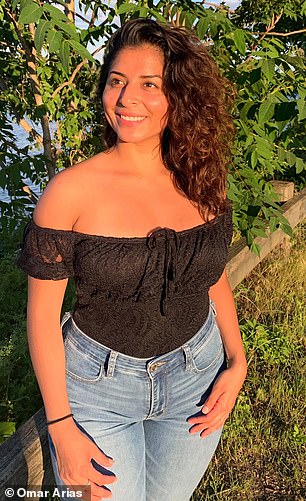 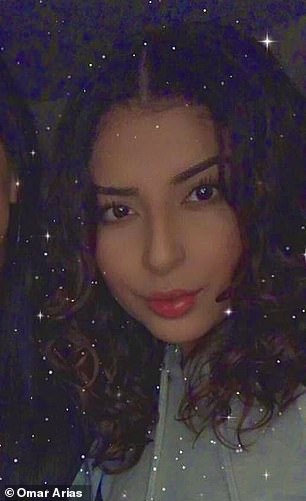 Arias told DailyMail.com Lopez (pictured) may have saved his life when she ‘pushed me out of the way and one bullet went through her chest’ 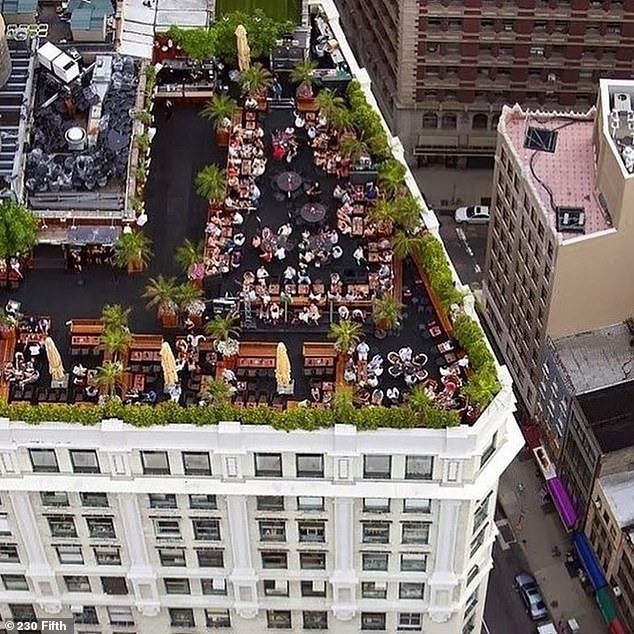 230 Fifth Rooftop Bar where the young couple were celebrating with friends before the shooting. The bar was also the scene of tragedy five years’ ago when a 30-year-old woman jumped to her death from the roof

Arias, Lopez and their friends left the bar. He said they were talking about the argument as they walked down the street.

Then they realized they’d been followed by the others, who drove up to them in their vehicles. It was about 12:30 a.m. Friday at the time.

‘That’s when we see one guy get out of his car and he’s confronting us and saying, “do we have a problem here? I hear you guys are talking smack about us,”‘ Arias recalled.

‘We told them, “there’s no problem here, we just want to tell you tell your girl to keep her hands to herself because she was getting all touchy touchy with me and my boy’s girlfriends.”‘

At that point, the man from the car was joined by his girlfriend, who stepped out of his vehicle and shouted, ‘I could do whatever I want,’ Arias said.

The man ordered the woman to get back into the car, he said.

Arias said another vehicle then pulled up driven by a black man who was about 6 feet tall, had dreadlocks and was wearing a black shirt and black jeans. 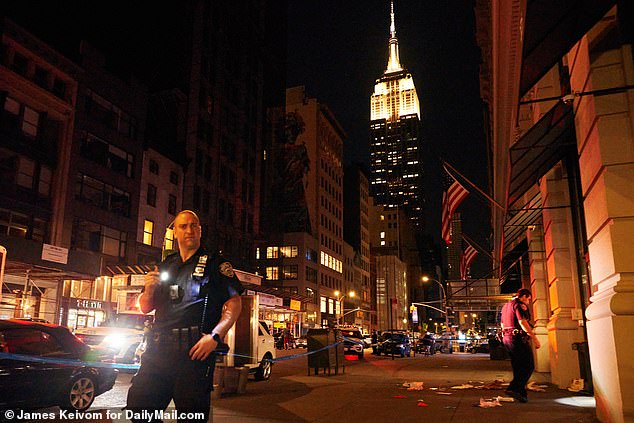 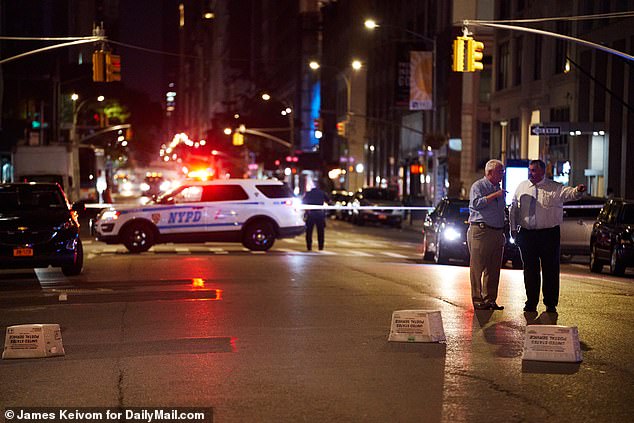 Arias said an argument broke out when a girl in another group began grabbing some of the women’s butts. He said he, Lopez and their group then left, but were confronted by some of the group in the street before another car pulled up and a man exited it with a gun and opened fire

THE CHEQUERED PAST OF 230 FIFTH ROOFTOP IN NYC

Five years ago 230 Fifth Rooftop was also the scene of another tragedy, when a female tech startup founder took her own life when she jumped from the top of the Manhattan bar.

She had been brought up in the Hasidic Jewish community in Brooklyn’s Boro Park but left it around five years before her death.

One week before her death she penned a harrowing letter, grieving for her lonely Hasidic Jewish childhood and isolated adult life.

In the letter she wrote with raw emotion about her feelings towards the strict and tight-knit world she was brought up in as a child.

She accused the Hasidic sect of constraining its followers’ thinking, and wrote of how she still struggled with analyical thinking.

The tech executive was developing an app designed specifically for ex-Hasids to navigate their way around New York City when she died. 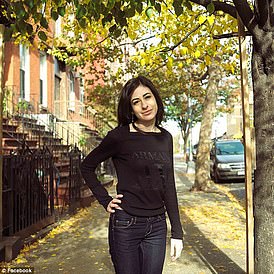 The driver of the second vehicle, a gray sedan, then exited the car with a gun and fired a shot into the air, Arias said.

‘Do we have a problem?’ Arias said the shooter then shouted.

‘Me and my boy said, “No, we don’t have a problem because you just brought a gun to a situation that’s already being handled,”‘ Arias recalled saying.

That’s when the gunman fired twice more, in their direction.

Arias said one of the bullets penetrated Lopez’s chest and then grazed him, leaving a hole in the left side of his rib cage.

It was later that morning, as Arias was recovering and sedated, that staff told him his girlfriend had died.

‘I told the nurses to leave the room, then I started screaming and crying,’ Arias recalled.

‘This is the second person that’s died in my hands. My grandpa died in my arms two years ago from a heart attack.’

Arias was released from the hospital a few hours later and was recovering at home Friday evening.

One of Lopez’s best friends, 19-year-old Alma Johana Corona, told DailyMail.com back in Norwalk Friday night that she was struggling not to cry as she tried to console her friend’s parents and younger brother.

‘I have cried so much I don’t have any more tears,’ Corona told DailyMail.com.

‘She’s my best friend. We’ve known each other since pre-school.’

She added: ‘She had so many friends. She was nice to everyone. She had a beautiful personality, energy. I just can’t believe this was meant for her.

‘She doesn’t have any enemies. I just don’t understand why anyone would do this to her.’

Police were called to the scene of the fatal, double-shooting in the Flatiron District at around 12:30a.m. Friday morning.

As of Friday evening, no arrests had been made and the gunman has not been located.

Police are continuing their investigation.

Millions of women lose out as judges dismiss fight over pensions

Millions of women lose out as judges dismiss fight over pensions