The Victorian coronavirus outbreak which now threatens to spread across Australia and undo the country’s good work in crushing the virus was sparked by a swathe of ‘stupid mistakes’ and bad luck.

Daniel Andrews’ government has been swamped with criticism over what went so wrong in the southern state as health authorities report between 49 to 76 positive tests each day and 36 Melbourne suburbs locked down.

The sudden surge has been blamed by ministers on the state’s bungled hotel quarantine program and a possible ‘superspreader’ who may or may not have allowed the virus to run rampant in the city’s north and western suburbs.

But critics have singled out issues including the 10,000-strong Black Lives Matter protest last month, the state’s alleged flawed outreach to multicultural communities and claims Victoria’s leaders took their eye off the ball due to a major Labor scandal a fortnight ago. 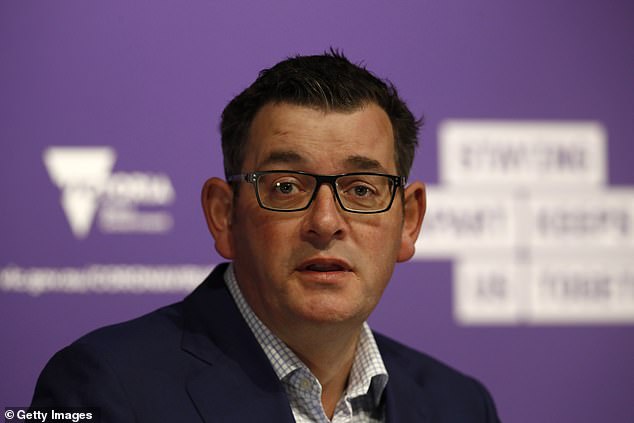 Mr Andrews was initially slammed by his critics as ‘Chairman Dan’ over the state’s harsh lockdown measures in response to the initial COVID outbreak in March, which included bans on golf – and the state is now in the grips of an alarming second surge 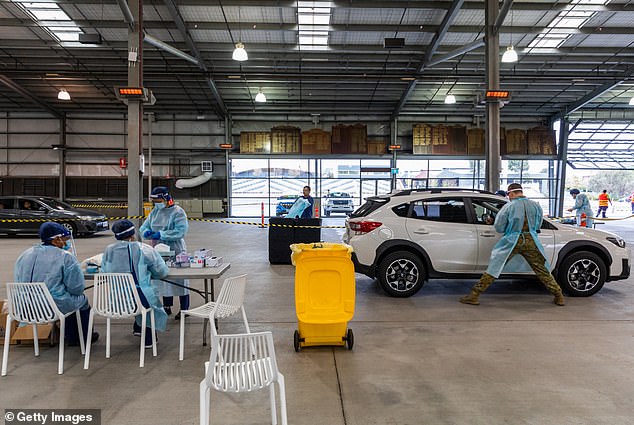 Australian Defence Force personnel man a drive-thru coronavirus testing site in Melbourne’s Flemington, on the border of a hotspot suburb, on Saturday. Daily Mail Australia today examines the possible reasons critics and the government have given for Victoria’s second spike in infections – which authorities fear could spread around the country 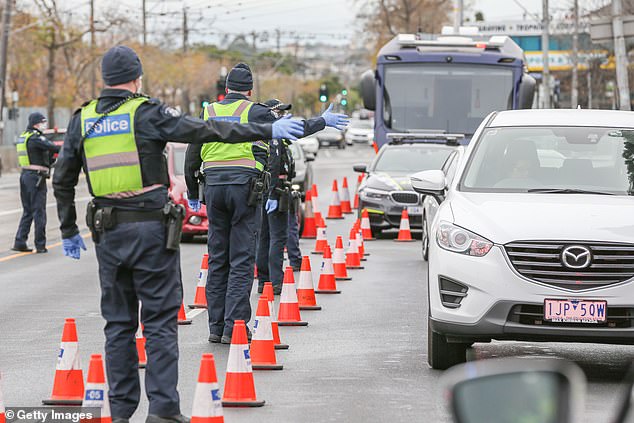 36 Melbourne suburbs are now in localised lockdowns as a result of the second spike in coronavirus infections. Above, police pull over

The avalanche of criticism is ironic given Mr Andrews was slammed by critics as ‘Chairman Dan’ for the state’s harsh lockdown measures in response to the initial COVID outbreak in March.

That lockdown went further than some others states – at one point even banning the playing of golf – and regardless Victoria in the grips of what state health officials have politely described as a ‘second peak’, if not a second wave.

Victoria reported 66 positives tests on Friday and resulting cases in Sydney – a Woolworthhs worker – and Darwin have sparked fears the contagion will spread across the country.

Such an outcome would be particularly disappointing given the seven other states and territories seem to have the outbreak under control. New South Wales reported just six new cases on Saturday, with five in hotel quarantine and one just a past infection.

Below, Daily Mail Australia rounds up the many reasons critics and the government have attributed as causing the state’s COVID-19 near-catastrophe.

In an essay published by The Weekend Australian on Saturday, commentator Greg Sheridan argued one of the main reasons for the outbreak was the state failing to supervised the quarantine hotels properly.

Mr Sheridan said the government had used ‘untrained security guards without even the most elementary common sense’.

The state government has confirmed that many of the infections throughout Melbourne have been linked by outbreaks that were meant to be kept under lock and key by the state’s hotel quarantine program. 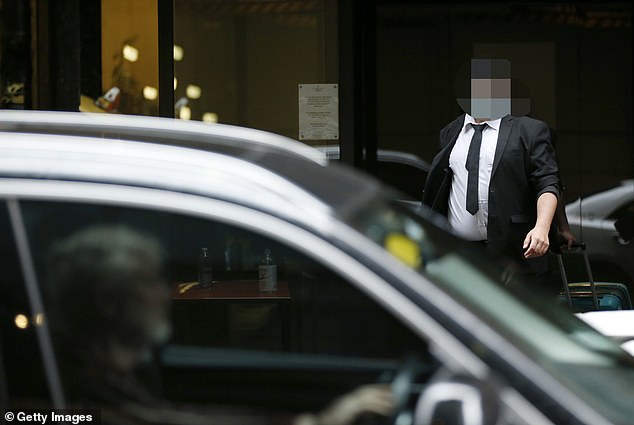 The state government has confirmed that many of the infections throughout Melbourne have been linked by outbreaks that were meant to be kept under lock and key by the state’s hotel quarantine program (pictured, guests at Stamford Hotel wear masks as they get into taxis) 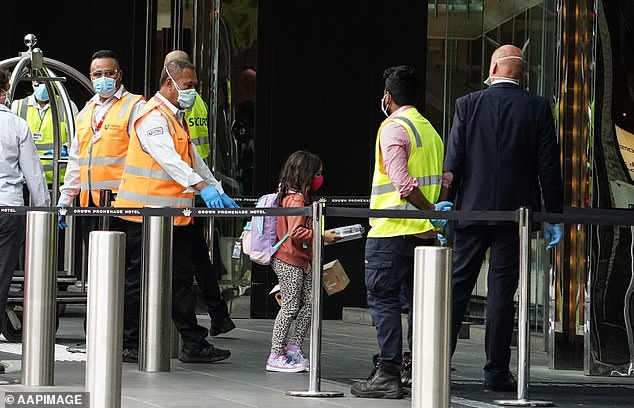 Mr Andrews said: ‘A significant number of the outbreaks in the north of the city are attributable via genomic sequencing to staff members in hotel quarantine breaching well-known and well understood infection control protocols.’

Lurid claims have emerged since emerged that some guards have had sex with hotel guests, have smuggled travellers out on trips to the convenience store 7-Eleven and that many opted not to wear face masks and ducked out for fast food on the job.

At the same time, The Herald Sun reported on the existence of a leaked email sent on June 24 which showed the state had pleaded for help from the Australian Defence Force in monitoring the Hotel Program.

The state government has launched an inquiry into the matter headed up by a retired Family Court judge.

Fines of $1652 were issued for the organisers of the city’s protest but the state Labor government did not go as far as the New South Wales government, which attempted to block the biggest demonstration on June 6.

The NSW Police Force took organisers to the state’s Supreme Court and successfully had the protest scheduled for that weekend blocked.

But as police massed to block the path of demonstrators, an appeals court gave the demonstration the go-ahead at the eleventh hour and police melted away. Meanwhile, about 10,000 people attended Melbourne’s protest. 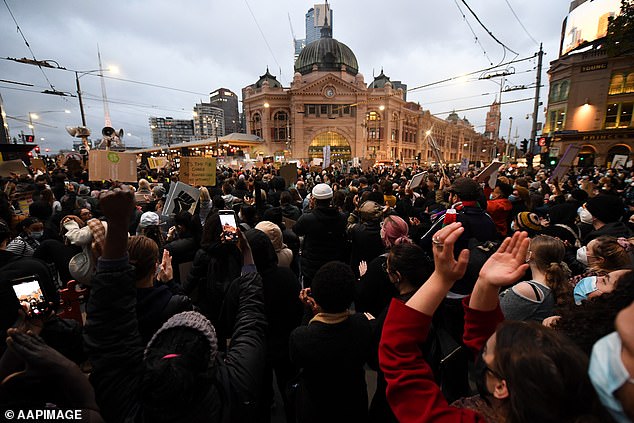 Commentator Mr Sheridan claimed the Andrews government made ‘no serious effort’ to stop Melbourne’s mass Black Lives Matter demonstrations following the death of George Floyd in the United States (pictured, thousands of protesters turned out for the Black Lives Matter protest in Melbourne on June 6) 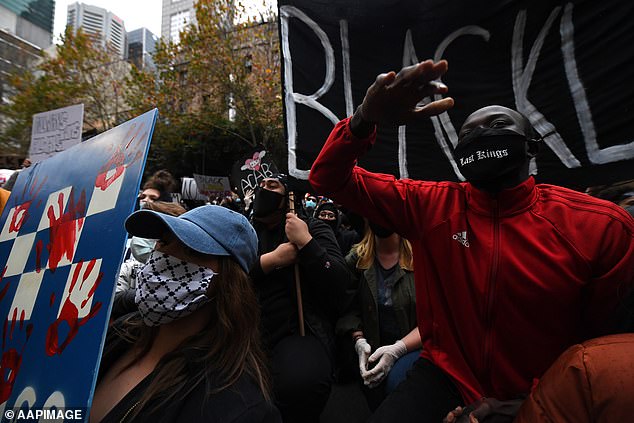 About 10,000 people attended Melbourne’s protest following the death of US man George Floyd 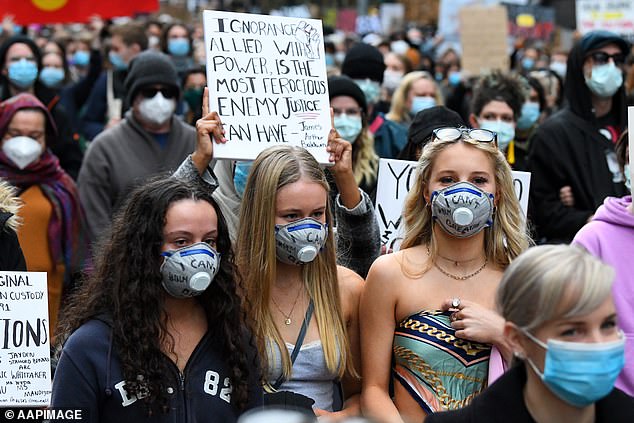 Fines of $1652 were issued for the organisers of the city’s protest but the state Labor government did not go as far as the New South Wales government, which attempted to block the biggest demonstration on June 6 (pictured, demonstrators march the streets during the Black Lives Matter protest)

Ms Credlin said:’Either we are in a COVID emergency – and the rules apply to everyone – or we’re not.’

But Victorian Health officials vehemently dispute the criticisms. Health officials said that only four positive COVID-19 cases came from people who attended the mass demonstration in Melbourne a month ago.

Others point out shopping centres were already crammed with people at the time of the protests.

3. ‘Conspiracies’ in the suburbs and political distractions

The state’s Health Minister, Jenny Mikakos, revealed on Friday that 10,000 people in Victoria’s hotspots had refused door-to-door testing on the basis they believed the outbreak was a conspiracy.

‘It is concerning that some people believe that coronavirus is a conspiracy or that it won’t impact on them,’ Ms Mikakos said.

Posts in local Facebook groups reveal confusion among hotspot locals about the conditions of the new lockdown and feature sporadic complaints from some people who say they will not answer the front door to testers.

Meanwhile, for a week in June the state’s leaders – if not Victoria’s top doctors – were focused on an issue other than coronavirus. 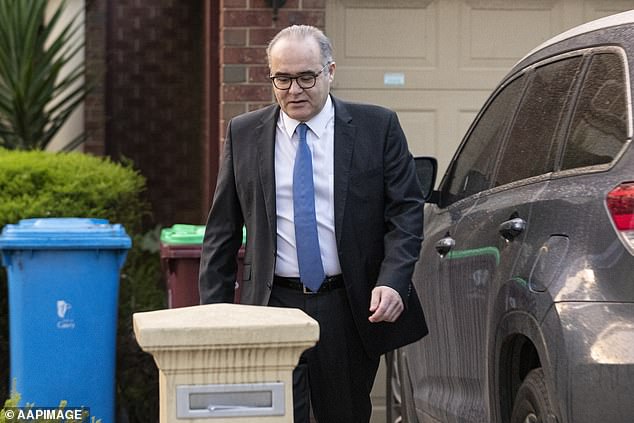 Nine Network’s 60 Minutes program set off a bomb in the Victorian Labor party about a fortnight ago, broadcasting lurid video where powerbroker MP Adam Somyurek was allegedly engaging in branch-stacking behaviour.

The fallout from the saga – which saw Somyurek expelled from the Labor party and under investigation by authorities – saw Mr Andrews chewing up much of his time briefing the media on how his government was responding to the saga.

Minister Mikakos claimed on Friday that a single ‘superspreader’ may have been behind the rapid spread of the virus in Melbourne’s suburbs.

‘There seems to be a single source of infection for many of the cases that have gone across the northern and western suburbs of Melbourne,’ she said.

‘It appears to be even potentially a super spreader that has caused this upsurge in cases.’

However, Victoria’s deputy health officer Dr Annaliese van Diemen, said there was no ‘definitive’ evidence a superspreader was responsible.

Critic Mr Sheridan argued in his essay this weekend that Victoria was ‘not as energetic’ in contact tracing as other states and territories.

Contact tracers are ‘disease detectives’ who investigate people who have tested positive and determine who they may have come into contact with.

Dr Sutton said the state had more than 2,500 people in self-isolation and ‘we’re at the limits of managing that number’.

Contact tracing teams from other states have since began pitching in. 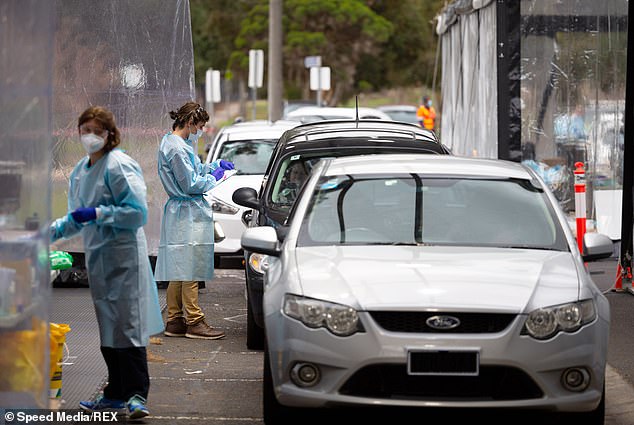 The third issue, Mr Sheridan argued, is the state was ‘not as energetic’ in contact tracing as other states and territories (pictured, medical personnel carry out coronavirus swab tests) 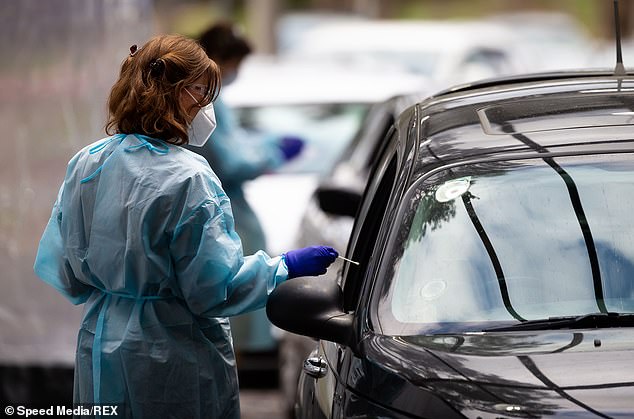 Contact tracers are ‘disease detectives’ who investigate people who have tested positive and determine who they may have come into contact with (pictured, a driver is tested for coronavirus at a mobile testing site) 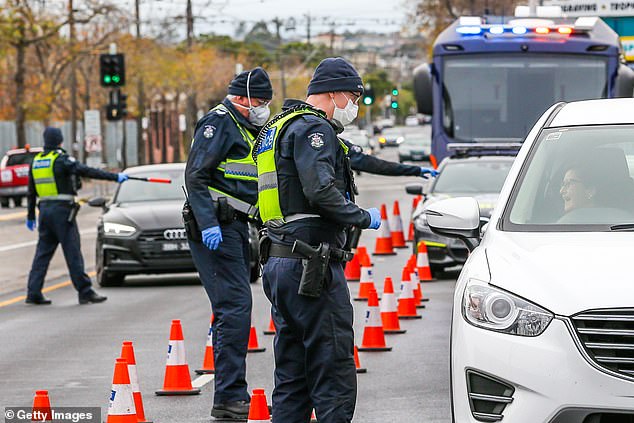 But as Melbourne locks down its north and western suburbs, the Victorian government has launched a testing blitz (pictured, police officers speak to drivers at a road block at Ascot Vale, a coronavirus hotspot)

But as Melbourne locks down its north and western suburbs, the Victorian government has launched a testing blitz. Workers have gone door-to-door and on some days more than 20,000 Victorians have been being tested per day.

And as of Saturday, Victoria had performed more tests per capita 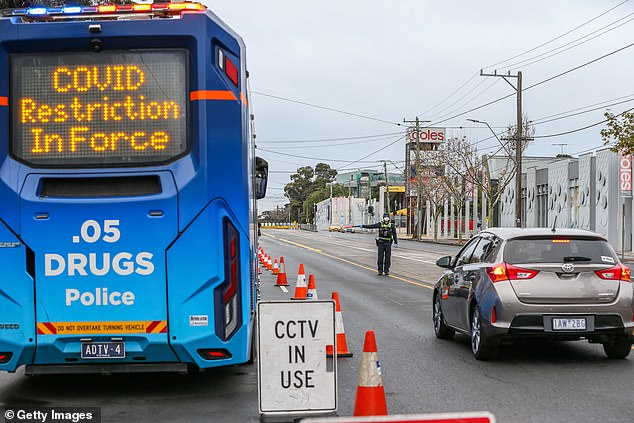 The state government has been forced to step up its outreach to multicultural and multifaith groups in the wake of the outbreak in the state’s north, officials have confirmed to daily mail Australia.

Some ethnic community representatives accused the government of having bungled its social distancing communications.

For instance, late last month some African community leaders in Melbourne slammed authorities for producing coronavirus health advice in a tribal language few people can actually read – instead of coming to talk to them on the ground. 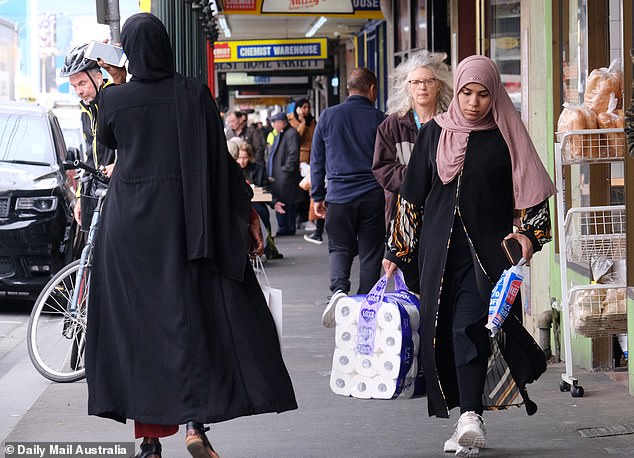 Separately, some commentators jumped on the fact that an Eid end-of-Ramadan feast was the alleged source of at least one cluster

There is no evidence that community is linked to a COVID-outbreak, but leaders said they were concerned about the state government’s practices.

Ring Mayar, the president of the South Sudanese Community Association in Victoria, said his community had been ‘gravely neglected’.

Critics pointed out many were unable to read the Dinka language pamphlets the government had produced.

The state’s Department of Health and Human Services told Daily Mail Australia: ‘We’ve been in regular contact with various multicultural and multifaith groups throughout the pandemic to ensure people from all backgrounds understand the symptoms to look out for, where to get tested and how to keep their families safe.

‘These efforts have been stepped up further this week with outreach teams, doorknocks and phone calls in coronavirus hotspot areas – all of which are being delivered in a range of languages to help support culturally and linguistically diverse communities.’