By James Gant For Mailonline

Demonstrators waved banners reading ‘justice for Shukri’, ‘silence is violence’ and ‘no justice, no peace’ in the street near Parliament.

It comes exactly a year after 12-year-old Shukri drowned in a river in Bury, Greater Manchester, which was not treated as suspicious by police. 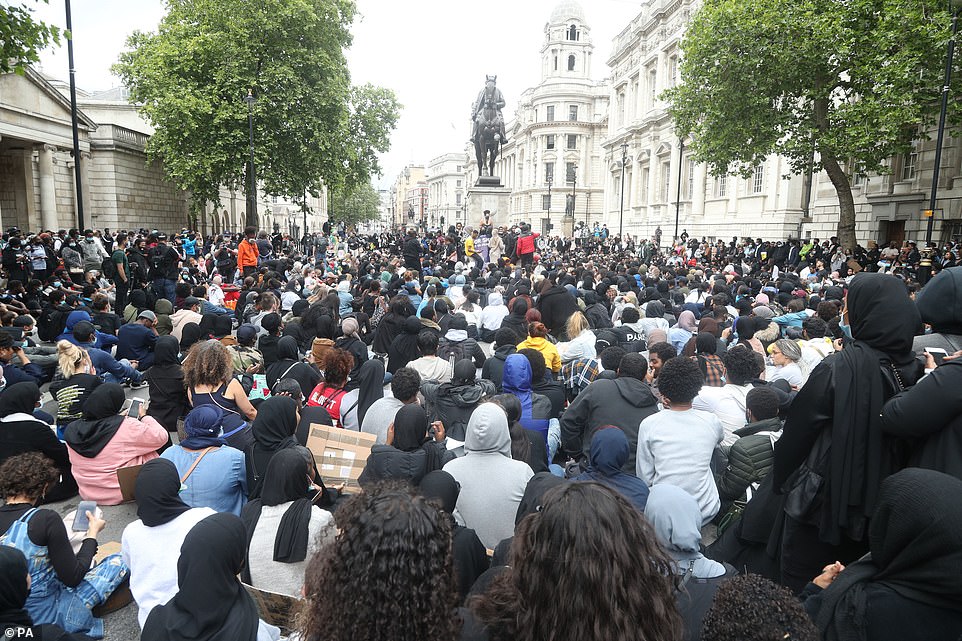 Demonstrators waved banners reading ‘justice for Shukri’, ‘silence is violence’ and ‘no justice, no peace’ in the street near Parliament 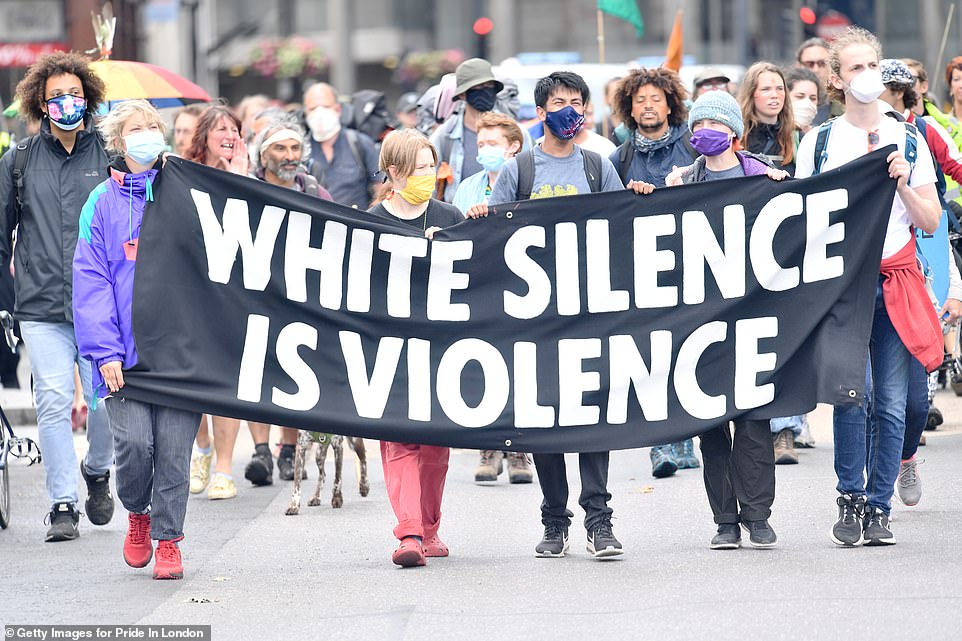 A social media post advertising today’s march read: ‘Peaceful protest for our sister Shukri. One year on, still no change. Does she not matter?’

It said demonstrators would meet in Hyde Park and march to the Department of Education on Great Smith Street, Westminster.

There was also a virtual protest, organised by LDNBLM and Educators for Justice, for people who wanted to be a part of the movement but could not make it in person.

At the same time there was a Black Trans Lives Matter protest, which met at Wellington Arch at 2pm and marched to Downing Street for 3pm. 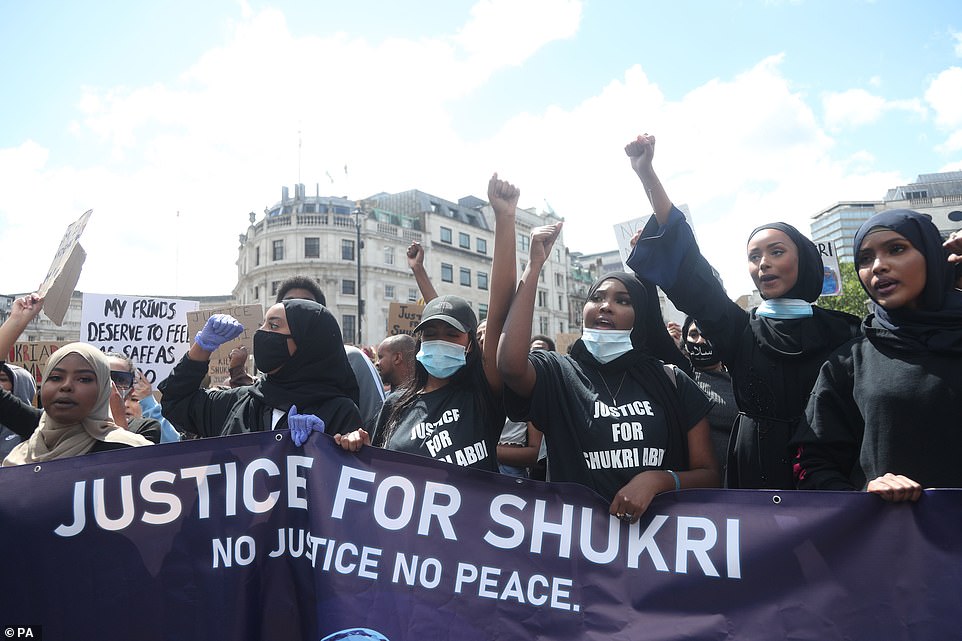 It comes exactly a year after 12-year-old Shukri drowned in a river in Bury, Greater Manchester, which was not treated as suspicious by police. Pictured: Protesters today

Shukri’s mother previously said her daughter hated water and could not swim so would not have been near the River Irwell by choice.

In February an inquest into her death heard a school girl ‘told her to ”get in the water or I’ll kill you” but said it was said as a joke’.

The foster carer of one of the four children with Shukri, called Child One in court, said the girl admitted to her three days after the death that she had threatened to kill the school girl if she didn’t get in the water.

Shukri and two of the children had been stopped in Primark earlier that day for shoplifting, the inquest heard. 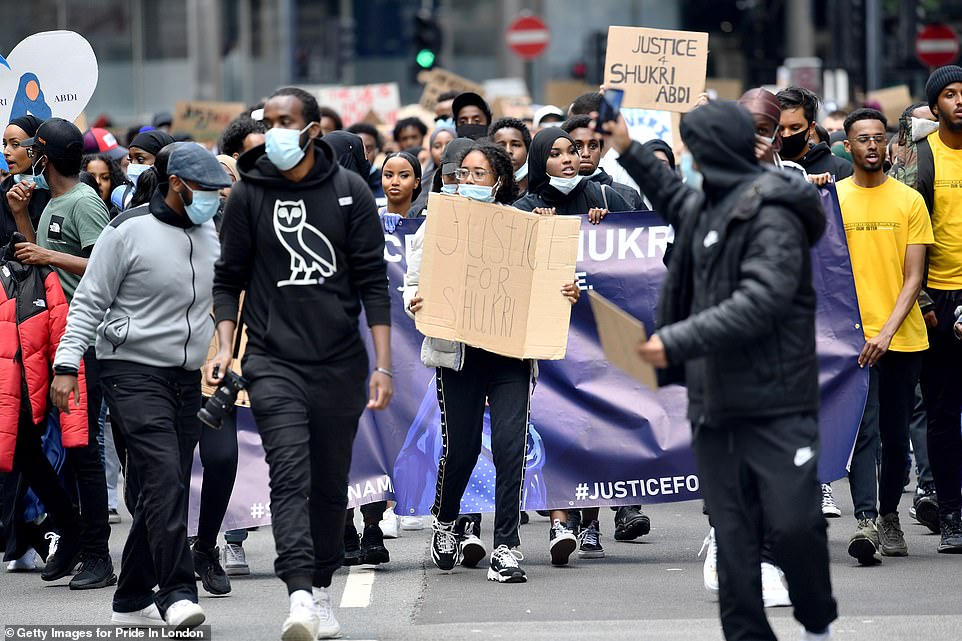 Giving evidence, her mother Zak Zam Ture said Shukri had never been swimming or been near a river in her life.

She told the court she had been expected home at 3.15pm that day – in time for mosque at 5pm.

When her daughter failed to return, Ms Ture went to her school, a nearby park and called on other Somali families to help look for her.

A friend told her she had seen Shukri walking on her own in the direction of her house with two girls following behind, her mother told the hearing.

Police told her afterwards four other children were with her daughter at the river before her death and Shukri and two of the other girls had been stopped in Primark for shoplifting that day.

Black Lives Matter protests have erupted across the world since the death of George Floyd in police custody in the US.

In recent weeks the statue to Britain’s greatest ever Prime Minister Sir Winston Churchill was defaced by BLM protesters and police officers have come under attack.

Last week police formed a defensive ring around the monument, even had to be boarded up after the plinth was defaced during a rally three weeks ago.

But that protest was largely without incident, in stark contrast to the week before which saw ugly clashes between BLM demonstrators and thugs who pelted police with bottles, barriers and fireworks.

Coronavirus update: Seven bacterial ‘hotspots’ to be aware of in your area - what to avoid

State Pension UK: Triple Lock may survive as lockdown impact not as severe as first feared
13 mins ago

State Pension UK: Triple Lock may survive as lockdown impact not as severe as first feared