The 42-year-old quarterback captioned a self portrait on Instagram: ‘Only thing we have to fear is fear itself.’

Roosevelt was addressing a beleaguered country in the midst of America’s Great Depression as Adolf Hitler was consolidating his power in the early days of Nazi Germany.

Brady, on the other hand, was using the quote in a branded social media post that showed him drinking from a water bottle emblazoned with his ‘TB12’ logo.

Thursday marked the second time this week the former New England Patriots star practiced with his new Bucs teammates after signing a two-year, $50 million deal with Tampa Bay in March. His decision to risk COVID-19 infection came as Florida was recording 5,000 new cases of for the second consecutive day. 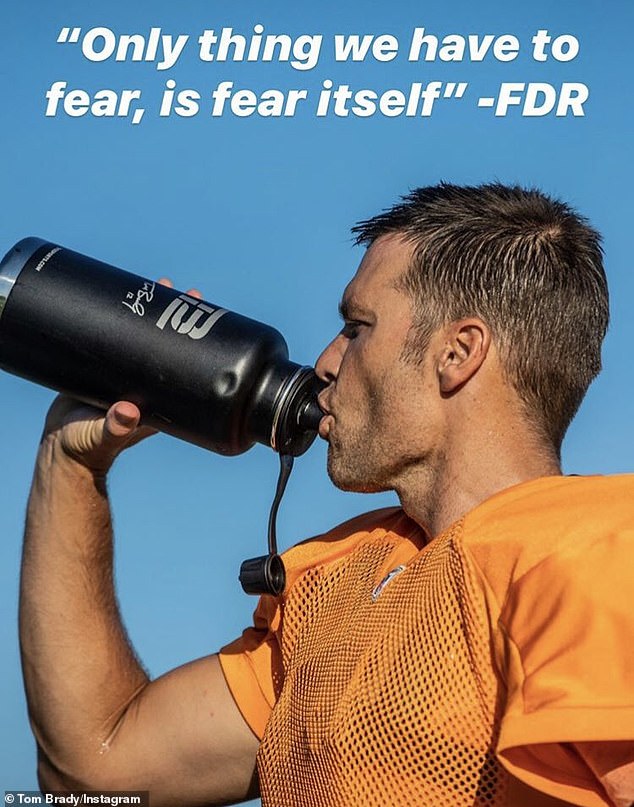 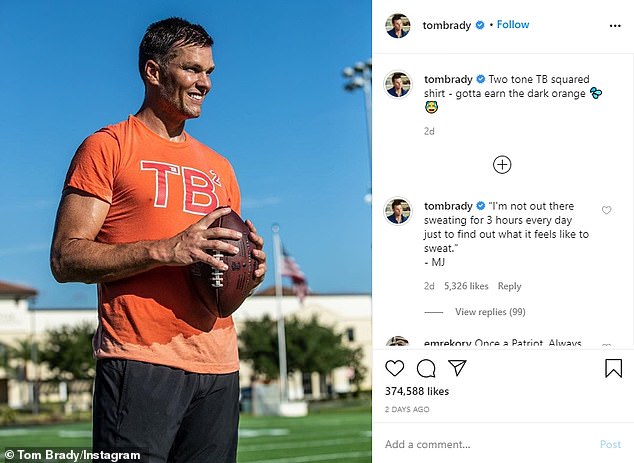 Days earlier, the state health department issued new guidance, advising citizens not to gather in groups of more than 50 people and to wear masks ‘in every setting.’

The informal, voluntary practice at Tampa’s Berkeley Preparatory School had fewer than 50 participants, but players were not wearing masks, aside from the ones fastened to their helmets.

In the wake of several NFL players across the league testing positive in recent weeks, including two unidentified Bucs players, NFLPA medical director Thom Mayer released a statement Saturday imploring all players to stop group practices amid the coronavirus pandemic.

‘Please be advised that it is our consensus medical opinion that in light of the increase in COVID-19 cases in certain states that no players should be engaged in practicing together in private workouts,’ Mayer wrote. ‘Our goal is to have all players and your families as healthy as possible in the coming months.

‘We are working on the best mitigation procedures at team facilities for both training camps and the upcoming season, and believe that it is in the best interest of all players that we advise against any voluntary joint practices before training camp commences.’

Team facilities were closed in late March due to the pandemic and have been reopened to limited personnel. No players other than those rehabilitating injuries are allowed at those facilities.

Dr. Allen Sills, the NFL’s chief medical officer, stressed that what the general public should be doing during the pandemic is exactly what the league and its players should be doing.

In response to Brady and other players holding private workouts, Sills said the NFL and NFLPA both want ‘the safest possible environment for all of our constituents.’

‘Again, this is all about risk reduction and trying to mitigate risk,’ he said. ‘We know that we can’t eliminate risk. And so we will work very much hand in hand with the players association because, again, this is where everyone in that team environment is going to share the same risk. But they’ll also share the same responsibility to each other.’

Sills also noted that the league and union are looking into the use of personal protective equipment by players. That includes modifications to the helmet that may provide additional risk reduction.

‘Obviously we have to think about any potential unintended consequences of that modification. So a lot of work is still being done on that,’ he said.

The NFL still plans to hold training camps on time beginning in late July, though contingency plans are in place.

Hours after the league canceled the Hall of Fame game that kicks off the preseason, the 32 team owners on Thursday were updated on a variety of issues, many dealing with working through the coronavirus pandemic. Most notably, according to NFL general counsel Jeff Pash, the owners were told about plans to fully reopen team facilities for training camp next month.

‘The clubs have been advised that training camps are expected to open on the normal schedule,’ Pash said. ‘The dates set forth in the collective bargaining agreement, for most clubs that would be July 28. Obviously they can bring in rookies and certain other players before that.

‘The preseason number of games, we’re in active discussions with the players association on those issues, and will continue at that and expect to have some resolution relatively soon and will advise the clubs at that time.’

Earlier Thursday, the league and the Pro Football Hall of Fame canceled the opening preseason game between Dallas and Pittsburgh set for August 6. The hall’s induction ceremonies set for August 8, and for mid-September for a special centennial class, have been moved to August 2021, when the Cowboys and Steelers will play in the game.

Girl, three, dies after being knocked down by car right outside her house in Warwickshire 0