President Trump took to Twitter on Saturday to lash out at his political enemies and denounce polls showing him losing to ‘corrupt’ Joe Biden as he vowed to do away with Obamacare, which he called a ‘joke.’

‘Do not believe the Fake News Media,’ Trump tweeted on Saturday.

‘These are the real polls, the Silent Majority, not FAKE POLLS!’

‘MSDNC’ is a mocking reference to the left-leaning cable channel MSNBC, with the letters ‘DNC’ standing for Democratic National Committee. 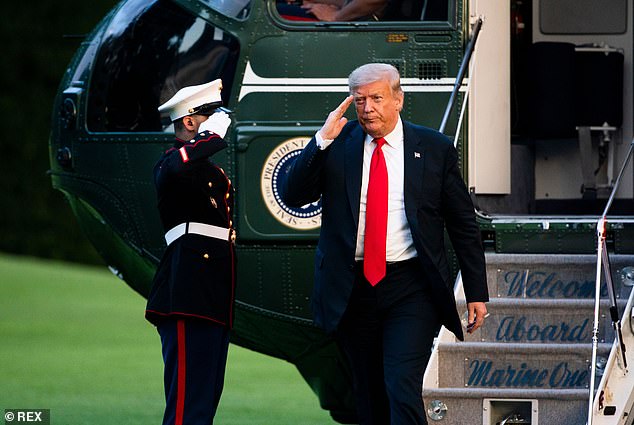 President Trump hit out at his enemies on Saturday, denouncing ‘fake news’ for reporting unfavorable poll numbers and vowing to defeat ‘corrupt’ Joe Biden in November

The implication of Trump’s reference to ‘MSDNC’ is that MSNBC is a propaganda tool of the Democratic Party.

In a follow-up tweet, the president wrote: ‘We will win the Election against Corrupt Joe Biden, Nancy Pelosi, and Schumer.

‘We will save the Supreme Court, your 2nd Amendment, permanent damage from the ridiculous Green New Deal, and you from massive Tax Hikes.

Trump held a much-hyped campaign rally in Tulsa, Oklahoma, last Saturday – the first public re-election event since the coronavirus pandemic forced the president to shelve his beloved speeches to his supporters.

Despite the campaign’s claims leading up to the rally that more than 1 million tickets were reserved, Tulsa officials put the exact number who gathered in the arena at slightly more than 6,200.

Trump and Vice President Mike Pence also canceled speeches that they planned to give to an overflow crowd just outside the BOK Center after a few dozen people had attended.

In the days since the Tulsa rally, the president and his supporters have claimed that would-be rallygoers were scared off by the coronavirus as well as Black Lives Matter protests that have swept the nation since the death of George Floyd. 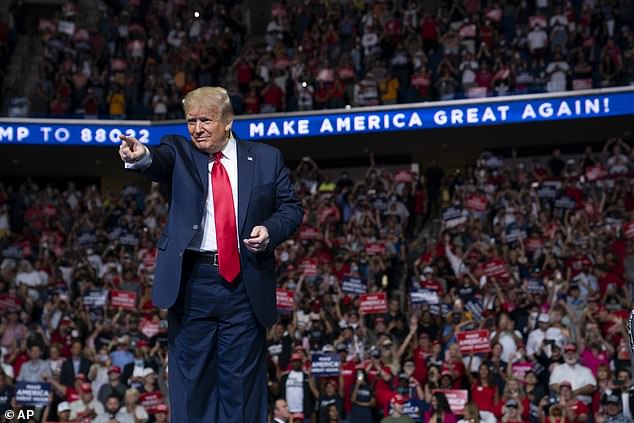 The president touted the television ratings generated by his rally last Saturday in Tulsa, Oklahoma – even though just over 6,200 people attended the event, far short of what the campaign promised

During Trump’s address at 9pm on Saturday, Fox had 8.2 million people watching.

CNN and MSNBC aired only clips of Trump talking, yet each news network had about twice as many viewers as they normally get on Saturday nights.

In the absence of sports or first-run scripted series, news continues to be the dominant force in television viewing.

ABC’s prime-time interview of John Bolton by Martha Raddatz was seen by 6.2 million people on Sunday, third only to America’s Got Talent and 60 Minutes on broadcast networks last week. 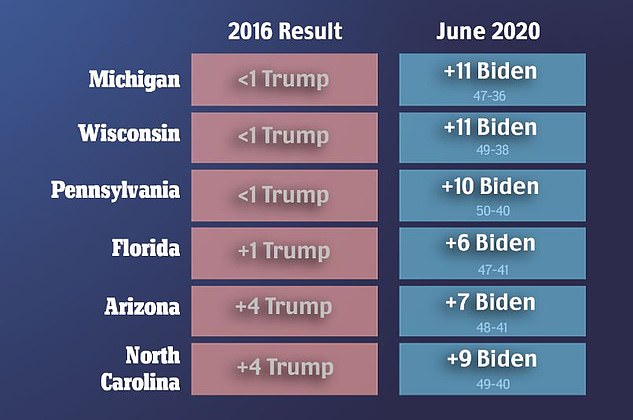 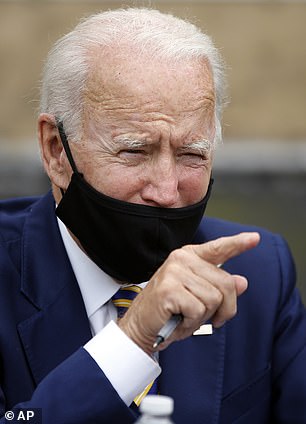 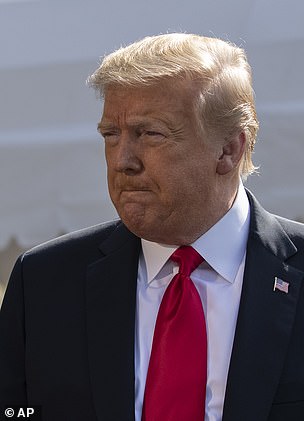 The president has also been panicked recently by polls which show him losing badly to Biden.

A New York Times/Siena College Poll whose results were released on Wednesday show the president trailing the former vice president by 14 points.

Even more troubling for Trump is the apparent erosion in support from key Republican constituencies, including men, white Americans, and older voters.

Biden currently has the support of 50 per cent of registered voters, while Trump sits at 36 per cent, according to the poll.

Additionally, 50 per cent of those surveyed said they had ‘very unfavorable’ views of Trump, while about half of that – 27 per cent – held the same view of Biden.

About the same percentage of Americans view each candidate very favorably – with 27 per cent saying that of Trump and 26 per cent believing that about Biden, the Democrats’ presumptive nominee.

A Fox News poll released earlier this week painted a bleak picture for the president, who is trailing Biden in critical swing states like Florida.

Biden is either winning or tied with Trump in states that were once thought to be solidly Republican, like Georgia and North Carolina.

Trump on Saturday also touted his administration’s efforts to gut Obamacare, where its fate is now in the hands of the Supreme Court after the Justice Department argued that the law should be struck down.

‘Now that the very expensive, unpopular and unfair Individual Mandate provision has been terminated by us, many States & the U.S. are asking the Supreme Court that Obamacare itself be terminated so that it can be replaced with a FAR BETTER AND MUCH LESS EXPENSIVE ALTERNATIVE,’ the president tweeted on Saturday.

Trump added: ‘Obamacare is a joke! Deductible is far too high and the overall cost is ridiculous.

‘My Administration has gone out of its way to manage OC much better than previous, but it is still no good.

‘I will ALWAYS PROTECT PEOPLE WITH PRE-EXISTING CONDITIONS, ALWAYS, ALWAYS,ALWAYS!!!’

Last year, a federal appeals court struck down the ‘individual mandate’ provision of the Affordable Care Act which required those who did not buy health insurance to pay a penalty when filing their taxes.

The Trump administration is now asking the Supreme Court to invalidate the entire law, saying it is unconstitutional.

Critics say that having Obamacare struck down by the court would deprive some 20 million Americans of health coverage. 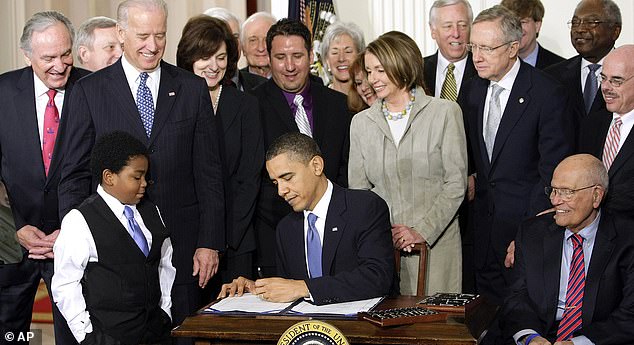 The healthcare bill, dubbed Obamacare, was signed into law by President Barack Obama in March 2010 (pictured)

In the case before the Supreme Court, Texas and other conservative-led states argue that the ACA was essentially rendered unconstitutional after Congress passed tax legislation in 2017 that eliminated the law’s unpopular fines for not having health insurance, but left in place its requirement that virtually all Americans have coverage.

After failing to repeal Obamacare in 2017 when Republicans fully controlled Congress, Trump has put the weight of his administration behind the legal challenge.

If the health insurance requirement is invalidated, ‘then it necessarily follows that the rest of the ACA must also fall,’ Solicitor General Noel Francisco wrote Thursday.

The Trump administration’s views on what parts of the ACA might be kept or replaced if the law is overturned have shifted over time.

But in legal arguments, it has always supported getting rid of Obamacare provisions that prohibit insurance companies from discriminating against people on account of their medical history.

Nonetheless, Trump has repeatedly assured Americans that people with preexisting conditions would still be protected. Neither the White House nor congressional Republicans have specified how.

Thursday’s report from the government showed that about 487,000 people signed up for Obamacare with HealthCare.gov after losing their workplace coverage this year.

That’s an increase of 46 per cent from the same time period last year. Close to half a million people who lost their health insurance amid the economic shutdown to slow the spread of COVID-19 have gotten coverage through HealthCare.gov, the government reported Thursday 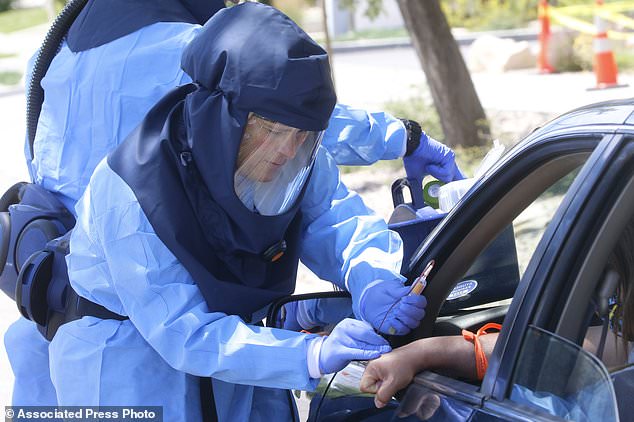 Cancer: Eat this tasty snack three or more times a week to reduce your risk 0