A team of underwater treasure hunters have reunited a student with a priceless family heirloom after it was dropped in a lake.

Joe Templeton, 21, was playing football with friends at Colwick Country Park in Nottingham when his ring slipped off his finger and into the water.

The golden band once belonged to his late grandfather and had been in the family for decades.

It had first been given to his grandfather when he was 21-years-old, and when the precious heirloom was passed down to Mr Templeton, his grandmother told him to always look after it. 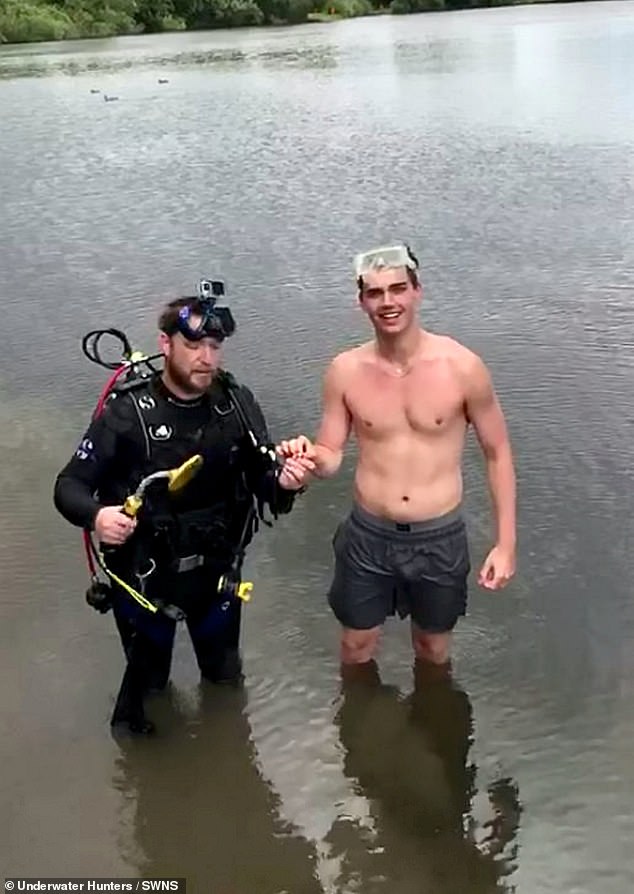 This is the moment Joe Templeton, 21, was reunited with his ring by diver Anthony Hanstock, after the treasure hunter had scoured the lake bed for his golden band 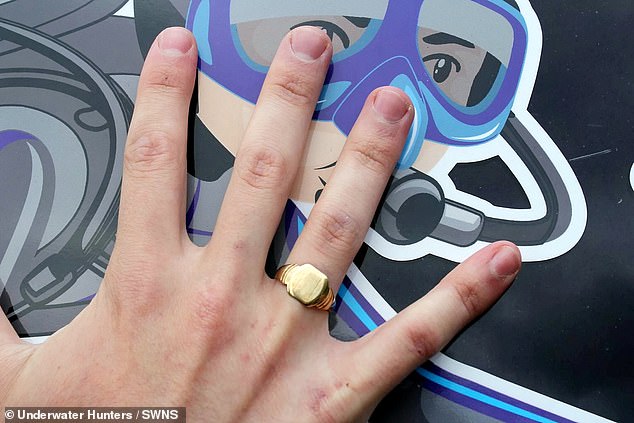 The golden ring once belonged to Joe’s late grandfather and had been in the family for decades. Joe’s grandmother told him to look after it when it was passed down to him

Devastated Mr Templeton spent hours searching for the ring himself after he lost it last Saturday.

He was almost ready to give up before he searched online and came across a team of specialist metal detectorists called Underwater Hunters.

Mr Templeton called them and they spent the next day scouring the bottom of the 63-acre lake with their underwater metal detectors and cameras. 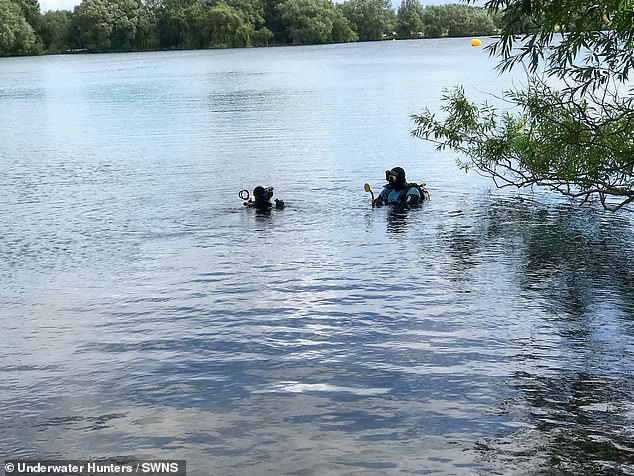 Worried about breaking the news to his family, Mr Templeton enlisted the help of local scuba diving group Underwater Hunters who search for lost objects lost in the water. Divers Warren Palmer, 45, and his stepson Anthony Hanstock, 25, were happy to help

After several hours, and many false finds, the team finally found Mr Templeton’s ring embedded in the thick mud.

The moment Mr Templeton was reunited with his late grandfather’s ring was captured on video which was taken by the dive team.

The Nottingham University student said: ‘I’m so happy, it’s saved me a lot of arguments with my family.’

Diver Warren Palmer, 45, said: ‘Joe was over the moon, he couldn’t believe it. He was very emotional.

‘We were nearly at the stage of giving up, thinking he had trod it in or it is just gone. We had one more go near the end of the day.

‘He was just ecstatic because he was scared to tell his mom and dad. He is a lovely guy, a very nice kid so I’m glad we could help him find it. 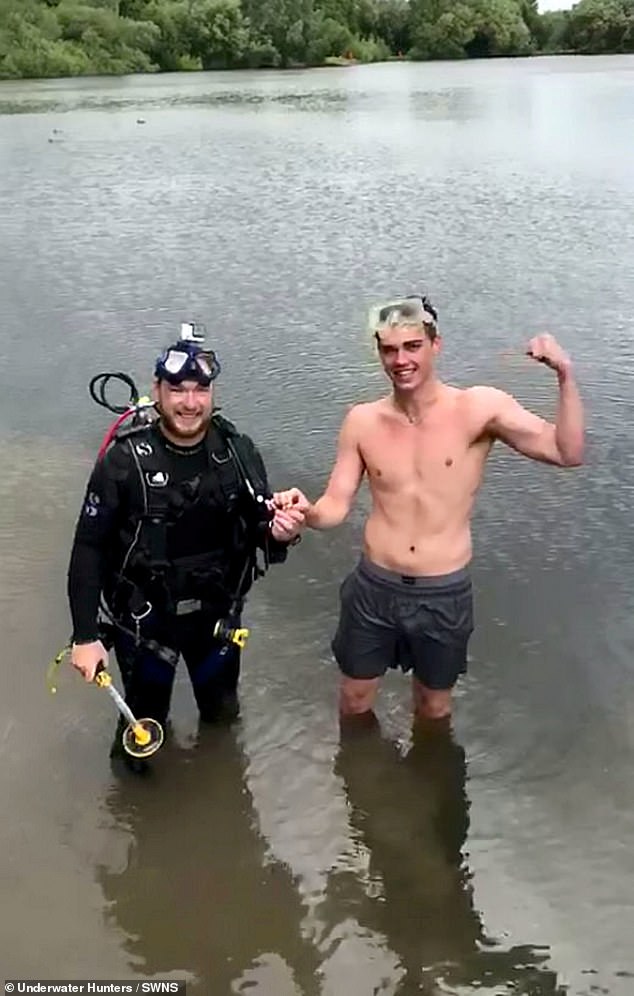 Mr Palmer said Joe was ‘over the moon’ and ‘very emotional’ when they found the ring. He said: ‘We were nearly at the stage of giving up’, but they gave it one last try and found the ring

‘You’re not talking just what’s on the surface, you’re talking what is in the silts.

‘I said to Joe ‘you’re very lucky you didn’t cut your feet in the lake’ because there’s that many bottles, keyrings, sharp little objects.

‘There’s lots of rubble. You’ve got that issue and with a metal detector, it will pick up the smallest tiniest thing.

‘When we’re in the water, you have to sift through that bit of water very carefully.

‘You have to go through it in your fingers.’

While underwater looking for Joe’s ring, the divers found a whole host of other treasures. 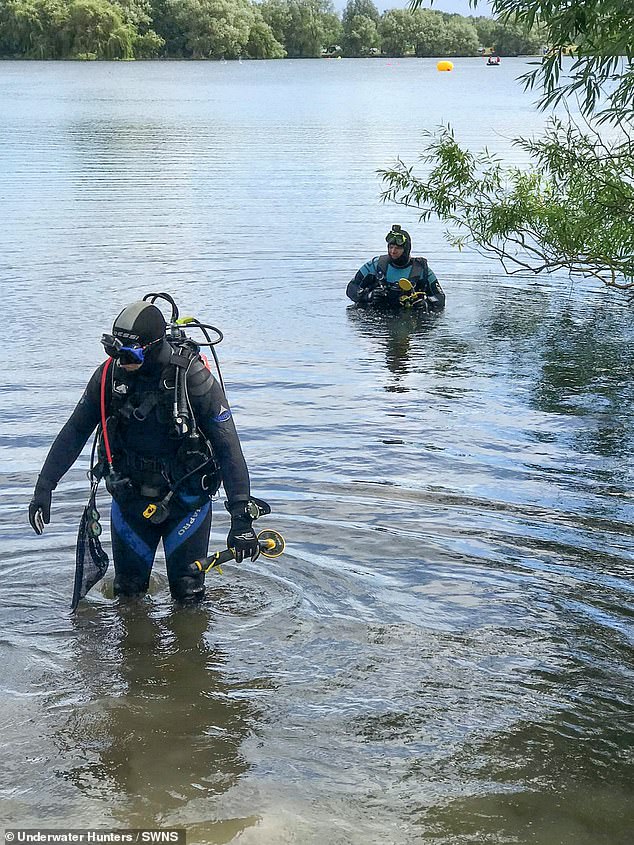 ‘It does take a while to sift through the lake if you’re looking for something that small.’

Since starting up their business last year the pair have found tons of weird and wacky items in lakes and rivers across the UK. 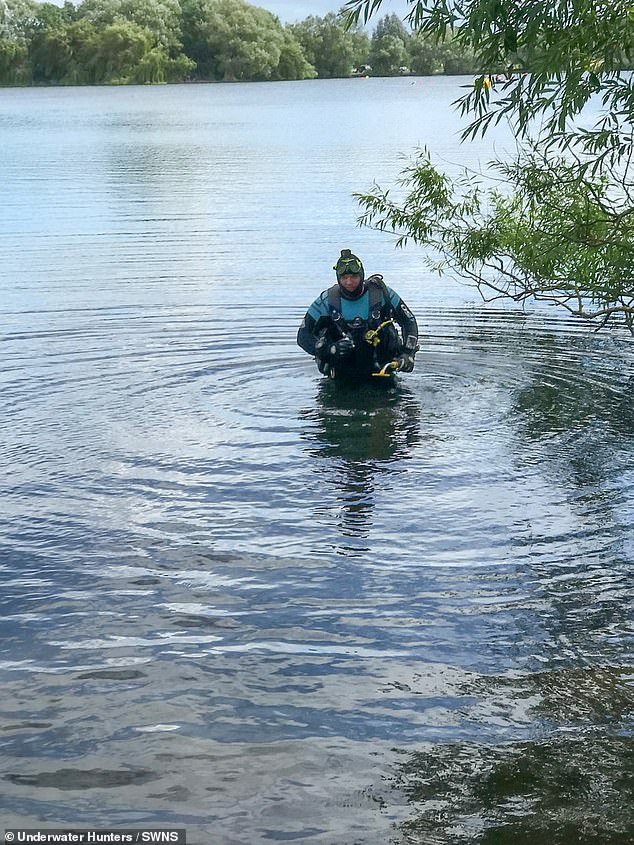 The diver emerges from the lake victorious after discovering the ring on the muddy floor of the lake, saving Mr Templeton from having to deliver the bad news to his family

‘People are still wanting to buy that as it’s memorabilia. You name it, it’s in those rivers and lakes.

‘Under there is a lot of wildlife and things, but then you see what humans are doing to it.

‘On top of the water it looks so nice but underneath it’s a different story.’

Can I travel to Spain now? New rules explained

Brazil, one of the worst hit countries, has yet to hit its peak

North East England faces Covid curfew from midnight TONIGHT – so where is next?

Michael McIntyre weight loss: Comedian reveals his secret to losing 14lb in one week
12 mins ago