The United States has dipped under 50,000 new coronavirus cases for the first time in four days, but experts fear celebrations for the July 4th Independence Day weekend will act like rocket fuel for the nation’s surging outbreak.

The new count came after three days in which the daily count reached as high as 54,500 new cases.

The country was reporting under 20,000 new infections a day as recently as June 15. 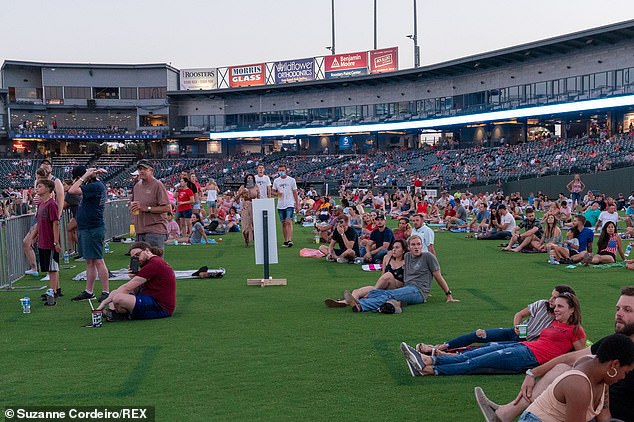 Texas saw a record 8,200 new cases on Saturday, as music lovers gathered in Round Rock 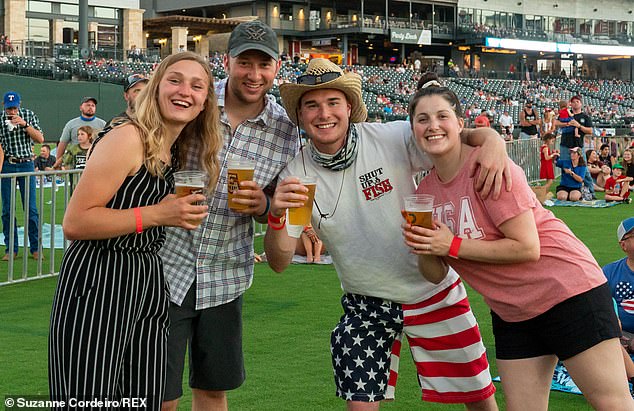 Experts warned, however, that the lower figure on Saturday does not necessarily mean the situation in the U.S. is improving, as it could be due to reduced reporting on a national holiday. They also expect a further spike after the long weekend.

The United States has the most infections and virus-related deaths in the world, with 2.8 million cases and nearly 130,000 dead, according to the university.

Yet the true toll of the pandemic is believed to be significantly higher, due to people who died before they were tested and missed mild cases.

President Donald Trump celebrated Independence Day with little heed for health warnings, beginning on Friday with a speech at Mount Rushmore in South Dakota and marking the occasion Saturday with an evening of fireworks on the National Mall in Washington.

In Fourth of July remarks, Trump said the U.S. was testing too much and falsely asserted that ‘by so doing, we show cases, 99 per cent of which are totally harmless.’

The World Health Organization has said about 20 per cent of those diagnosed with COVID-19 progress to severe disease, including pneumonia and respiratory failure.

Those with mild or no symptoms, meanwhile, could spread the virus to others. 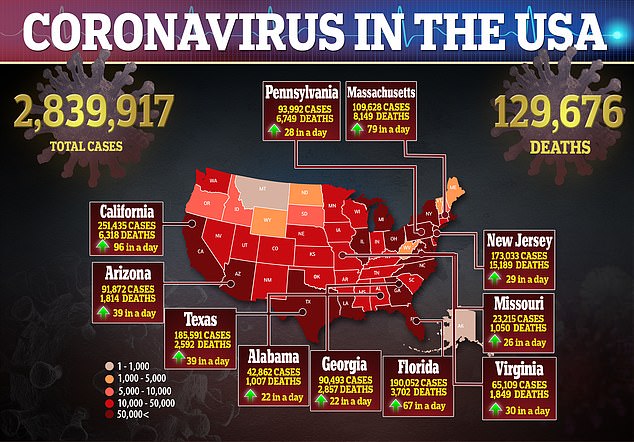 There are now more than 2.8 million cases confirmed in the United States

The mayor of Austin, Texas, where COVID-19 cases are surging, called Trump’s remarks ‘dangerous’ and ‘wrong.’

Mayor Steve Adler urged people to listen to local officials for public safety guidance rather than the ‘ambiguous message coming out of Washington.’

The Food and Drug Administration commissioner on Sunday declined to back up Trump’s claim.

Dr Stephen Hahn said that he’s ‘not going to get into who is right and who is wrong,’ but that government data clearly show ‘this is a serious problem.’

He adds that ‘any case is tragic’ and that to stem the tide of surging cases people should follow government guidance to practice social distancing and wear a mask. 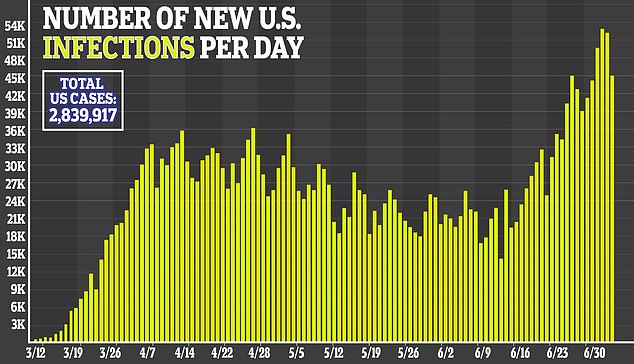 The U.S. is failing to get the pandemic under control as numbers surge to ever-higher levels 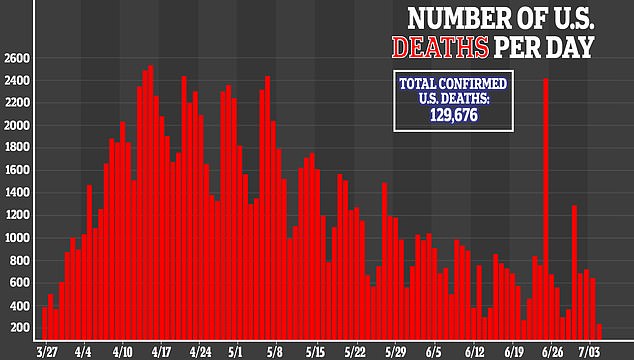 Almost 130,000 people have now died from COVID-19 in the United States

Florida health officials on Sunday said the state had reached a grim milestone: more than 200,000 people have tested positive for COVID-19.

Over the past two weeks, the rolling average number of daily new cases in the state has increased by 5,323 – an increase of 184.1 per cent.

About 43 per cent of the cases in Florida are in three counties: Miami-Dade, Broward and Palm Beach. 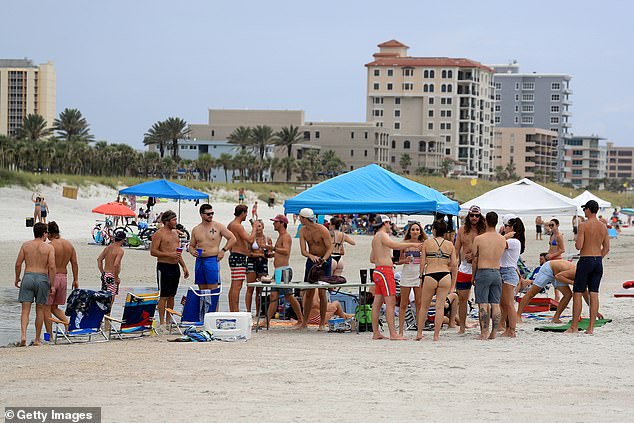 Miami Mayor Francis Suarez said Sunday on ABC’s ‘This Week’ that the high numbers of positive tests both in his county and the state are ‘extremely worrisome.’

Suarez, who had the virus in March, says it is clear the growth is ‘exponential at this point’ and officials are closely monitoring hospitalizations.

They are also closely watching the death rate, which ‘give us the impression’ that ‘much stricter’ measures have to be taken.

Florida’s death count is the ninth highest in the country overall and the 27th highest per capita, at 17.4 deaths per 100,000 people.

Walt Disney World’s theme parks are set to reopen next week, for the first time since March, but three firefighters for the theme park resort’s private government have tested positive for COVID-19.

Firefighters are upset since they are expected to use up sick or vacation days while in quarantine, instead of getting paid time off.

They also said Disney’s private government has done a poor job of communicating their coronavirus-related policies and informing other firefighters about their sick colleagues.

‘They can’t manage COVID in the fire department. How is Reedy Creek going to protect visitors?’ Stromsnes said.

Texas has similarly reported a rise in hospitalizations, with 7,890 people in hospitals for coronavirus-related ailments, an increase of 238 from Friday.

Much of Texas began mandating face coverings Friday on the orders of Governor Greg Abbott. Failure to obey the mask order carries a $250 fine.

The order is the most dramatic about-face that Abbott has made as he retreats from what stood out as one of America’s swiftest re-openings.

The mayor of Phoenix, Kate Gallego, said there was a ‘crisis’ involving coronavirus testing shortages in her city due to surging cases, which leads the U.S. in new coronavirus cases per capita.

Gallego, a Democrat, said some residents over the weekend had to line up for eight hours by car to get COVID-19 tests and that the federal government has been slow to help.

Gallego tells ABC’s ‘This Week’ on Sunday that Arizona went from ‘zero to 60’ by being one of the first states to reopen after it was among the last to implement stay-at-home orders.

She says that led to an explosion of cases, citing crowded nightclubs with free champagne and people unwittingly spreading the virus at large family gatherings.

He visited Phoenix while she was urging people to stay at home and avoid gatherings of more than 10 people, holding a large event and not wearing a mask.

In New York – previously the epicenter of the virus – Andrew Cuomo, the governor, said on Saturday there were more than 530 new confirmed cases and eight deaths.

At the height of New York’s virus outbreak, new infections reached daily totals of more than 10,000 and deaths topped 700.

And worldwide, a record 212,326 new cases of the coronavirus were diagnosed on Saturday, according to the World Health Organization.

June was the most devastating month for the global pandemic and saw cases top 10 million and deaths surge past 500,000.

The 10 million milestone was hit only last Sunday and the total has since risen to 11.3m, meaning more than 1.3 million people have been diagnosed in a week.

Sir Jeremy Farrar, a leading scientist advising politicians in Britain, said even the harrowing official figures are ‘in reality underestimates’.

He said in a tweet that the figures were ‘sobering’.

BP says the world may have already hit 'peak oil'